'Husband Is Not The Master Of Wife', SC Strikes Down 158 Year Old Adultery Law Under Section 497 IPC [Read Judgment] 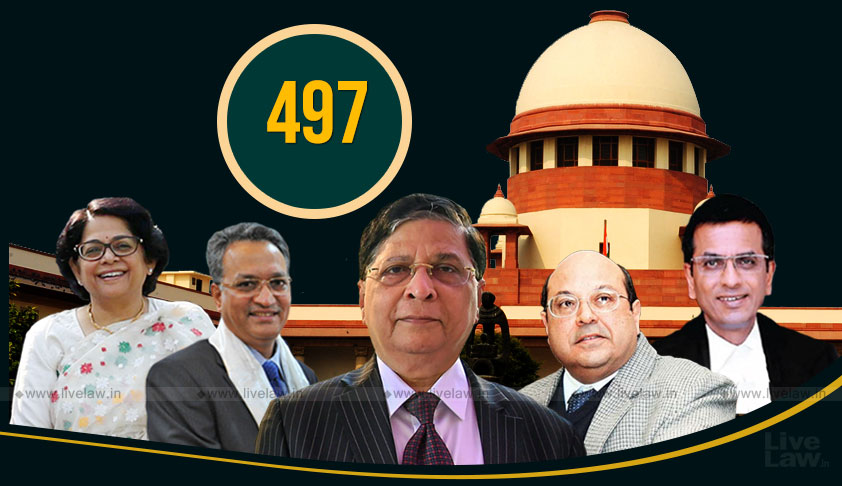 The Supreme Court has struck down 158 year old Section 497 of the Indian Penal Code, which criminalizes adultery, as unconstitutional."Any provision of law affecting individual dignity and equality of women invites wrath of  constitution. It's time to say that husband is not the master of wife. Legal soverignity of one sex over other sex is wrong", read out Chief Justice Misra from the...

The Supreme Court has struck down 158 year old Section 497 of the Indian Penal Code, which criminalizes adultery, as unconstitutional.

"Any provision of law affecting individual dignity and equality of women invites wrath of  constitution. It's time to say that husband is not the master of wife. Legal soverignity of one sex over other sex is wrong", read out Chief Justice Misra from the judgment written for himself and Justice A M Khanwilkar. The judgment held Section 497 to be "manifestly arbitrary".

Section 497 punished a married man for having sex with wife of another man. However, the sexual act is exempted from punishment if it is performed with the consent or connivance of the husband of the other woman. Also, the provision exempts the wife from punishment, and states that wife should not be even treated as an abettor.

The judgment of CJI Misra held that Section 497 violated a woman's right to dignity, resulting in infringement of Article 21 of the Constitution of India. The judgment borrows from the findings of Justice Nariman's judgment in Triple Talaq case.

The Court however clarified that adultery will be a ground for divorce. It was also stated that if an act of adultery leads the aggrieved spouse to suicide, the adulterous partner could be prosecuted for abetment of suicide under Section 306 of the IPC.

The judgment also struck down Section 198(2) of the Code of Criminal Procedure, as a consequence of striking down of Section 497 IPC.

Justice R F Nariman wrote a separate judgment to concur with the judgments of CJI Mira and Justice Khanwilkar, and stated that Section 497 was an archaic provision which had lost its rationale. "Ancient notion of man being the perpetrator and woman being victim of adultery no longer holds good", observed Justice Nariman. It treats women as chattel, and has chauvinistic undertones.

Justice Chandrachud in his separate but concurring opinion said that Section 497 was destructive to woman's dignity. "Autonomy is intrinsic in dignified human existence.497 denuded the woman from making choices.The law in adultery is a codified rule of patriarchy.Society attributes impossible attributes to a woman, Raising woman to a pedestal is one part of such attribution", he said.

"Respect for sexual autonomy must be emphasized.Marriage does not preserve ceiling of autonomy 497 perpetrates subordinate nature of woman in a marriage", these were his concluding remarks.

Justice Indu Malhotra noted in her judgment that the Section institutionalized discrimination.

The four-day long hearing in the PIL praying for the decriminalisation of the act of Adultery had witnessed positive, feminist remarks from the Supreme Court five-judge bench.

“The argument against you (the petitioner) is that section 497 protects the sanctity of marriage...However, if a married men has sexual intercourse, outside his marriage, but with an unmarried woman, that does not amount to an offence under the provision though it also effects the sanctity...”, reflected Justice D. Y. Chandrachud. “fidelity does not apply to a married man if he engages in extra-marital sex with a single woman? You exact fidelity from a woman but not from a man?”, he asked.

Concurring, Justice Rohinton Nariman cited the classical Article 14 test- “where is the intelligible differentia in saying that the sanctity of marriage is not hurt if a married man has sexual intercourse with an unmarried woman? This is manifest arbitrariness”

Further, Justice Chandrachud indicated the impropriety of the section in so far as it exempts from criminal prosecution a man who has engaged in sexual intercourse with a married woman if the same transpires with the consent or connivance of the said married woman’s husband- “can the section be saved if we strike down this part...because this is one ground for the unconstitutionality of the provision...or would we, by applying the doctrine of severability, in fact make the offence even more severe than the legislature intended?”

“Besides consent, If the husband of a woman connives with another man for the latter to participate in sexual intercourse with the former’s wife, then there would be no adultery! This ‘connivance’ attaches a certain deviousness to the Act”, he continued.

Justice Indu Malhotra also pointed out the “absurdity” of the section in as much as it legalises the act of Adultery if committed by with the consent or connivance of the husband of the woman who is party to the act- “Is the wife of the consenting husband being treated as chattel? This amounts to gender bias”

“The provision is Anti-human in a very ostensible way in so far as it implies that a woman could be subjugated to this extent on the consent of her husband...this is unknowable to Indian thought...such consent or connivance is unacceptable”, observed Chief Justice Dipak Misra.

Section 497 of the IPC, in so far as it absolutely immunises the adulteress against any criminal prosecution for the act of adultery, was also canvassed.

“There is no rationality in treating one party as the victim and the other as the accused for the same act...the only rationale behind the provision seems to be that marriage is an institution which has to be saved...marriage has been called an institution in all scriptures...it is built by two pillars and there has to be equal responsibility of both...to say that women are protected from the criminal ramifications of Adultery under Article 15(3) is not justified...Article 15(3) only applies to post-constitution laws...”, noted the Chief Justice. “An ancient provision is not protected under Article 15(3). It is for the Parliament to make (laws under Article 15(3)”, agreed Justice Nariman.

It was also pointed out how section 198(2) of the Cr. P. C. allows the initiation of criminal proceedings for Adultery only at the instance of the husband of the adulteress, but the wife of the man party to the act of adultery cannot institute a complaint.

“The man shall be booked for the offence and his wife shall suffer but the husband of the woman who has committed the crime will have the benefit...”, observed the Chief Justice.

Referring to the offence of bigamy under section 494 of the IPC, Justice Chandrachud weighed in, “bigamy is gender neutral...if a woman engages in sexual intercourse in a second marriage while the first is subsisting, it is punishable...section 497 does not use same the yardstick as section 494 and this distinction makes the former unconstitutional...”

The judge also remarked how sexual intercourse outside a subsisting marriage may be a symptom of a broken down marriage.

“If a marriage has broken down and a party engages in sexual intercourse outside the marital tie, you cannot criminalise that person...however, the sexual autonomy inherent in us is not absolute and that adultery is a ground for divorce is a reasonable restriction on that autonomy...decriminalising adultery would not have the effect of licensing it”, noted Justice Chandrachud. He repeated that one retains their sexual autonomy to an extent even after marriage and that the right to say “no” is not forfeited by marriage.

Towards the end of the hearing, Justice Chandrachud weighed in that making section 497 gender neutral would only address the issue of under-inclusion and that the real question is if Adultery should be a criminal offence at all. Justice Malhotra voiced her scepticism about how the relationship between two adults, which is a matrimonial dispute, could be a crime against the society.

With the Chief Justice Observing that the survival of a marriage should be left to the discretion of the husband and the wife, without any intrusion by the State, the judgment was reserved.

Senior Counsel Meenakshi Arora and Advocates Kaleeswaram Raj and Sunil Fernandes appeared on behalf of the petitioners, while the Centre was represented by ASG Pinky Anand.