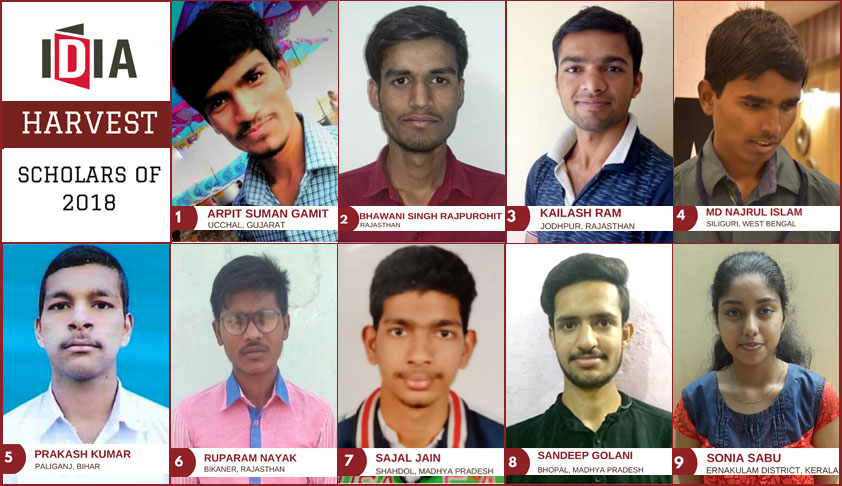 IDIA-Increasing Diversity by Increasing Access to Legal Education, which trains underprivileged students to gain admission to the top National Law Universities (NLUs) through the Common Law Admission Test (CLAT), has continued its success this year as well, with nine of its scholars making it to the leading law schools in India through the first CLAT allotment list.Following is a brief profile...

IDIA-Increasing Diversity by Increasing Access to Legal Education, which trains underprivileged students to gain admission to the top National Law Universities (NLUs) through the Common Law Admission Test (CLAT), has continued its success this year as well, with nine of its scholars making it to the leading law schools in India through the first CLAT allotment list.

Following is a brief profile of this year’s achievers, as retrieved from an IDIA release:

Arpit hails from Uchhal - a small town near the Gujarat-Maharashtra border. His father is a farmer with a monthly income of Rs. 22,000, and mother, a homemaker. Recognizing the potential in him, he was supported by an NGO named Navsarjan almost throughout his school years, and was then identified by the IDIA team in Gujarat. He has now secured a seat in National Law University, Odisha.

Bhawani hails from Bikaner, Rajasthan. His father works for 9 months a year and earns an annual income of Rs. 60,000 for a family with seven children. Bhawani was introduced to the IDIA team through his senior and another IDIA scholar Anil Bhadu who studies at National Law University, Bangalore. With the guidance of the IDIA Rajasthan Chapter, Bhawani studied hard for 8 months to prepare for CLAT 2018. His efforts bore fruit, and his brilliant CLAT score has now ensured him a seat in NALSAR University of Law.

Kailash is of the Meghwal people, hailing from the Tekra village in Phalodi, Jodhpur, Rajasthan. He is the eldest son of a farmer who earns an annual income of Rs. 90,000. With a law degree, he wishes to help those who have been denied their rights or have been discriminated against. He also hopes to empower his fellow citizens by educating them about the various legal solutions available to them. Having secured the 1st rank in the SC category in AILET, he is ready to begin studying to fulfill his dreams at the National Law University, Delhi.

Najrul is a student with total visual impairment from Siliguri, West Bengal. However, this didn't deter him from living alone in Delhi to find better opportunities. He has now secured a place at the National Law University, Delhi, and aspires to become a civil servant, with law as the perfect stepping stone to sharpen his intellect and shape his sense of justice to one day serve the country!

Prakash belongs to the community of Paliganj, Bihar. His father is an agriculturist with an annual income of Rs. 85,000 and looks after a family of six. He was introduced to IDIA by former deputy team leader of the IDIA Bihar chapter Asutosh Kashyap, who was studying at Chanakya National Law University (CNLU). Under their tutelage, he has secured a seat at the National Law University, Odisha.

According to the IDIA Rajasthan Team, Ruparam has proven himself to be one of the most diligent and hardworking trainees in the state. He is the son of Mr. Ganesharam, a farmer and Ms. Santosh Devi, a housewife. Ruparam has wanted to be a lawyer since his childhood but the family’s annual income of Rs. 60,000 was largely insufficient in supporting Ruparam’s dream.

Ruparam, however, refused to give up and found out about IDIA on his own. As per the release, unable to afford a direct bus, Ruparam got down half way and walked 15 kms to get to NLU, Jodhpur, where he has now secured a seat.

Sajal hails from the Shahdol district in Madhya Pradesh. Born with cerebral palsy, he had managed to get enrolled at the National Law University, Odisha, but had to drop out due to a weak financial situation and poor health. However, he has now secured a seat at Tamil Nadu National Law School, and also continues to fight for his rights in the family property that had been denied to him after his father went missing.

Sandeep was born and brought up in Bhopal, with his annual family income being Rs. 60,000. Having always been interested in the field of law, he now braved financial and time constraints to secure a seat at Damodaram Sanjivayya National Law University.

Sonia grew up in the Jacobite Christian community from the North Paravur locality in Ernakulam district, in Kerala. Sonia’s father is a daily wage worker in the Middle East, and earns Rs. 7,000 to 10,000 per month. Despite all odds, she has been an academically strong student throughout school, and is also a talented speaker. She has now gained admission to the National Law Institute University (NLIU), Bhopal.

IDIA scholars have proved their mettle time and again, swimming against the tide and performing with aplomb. However, legal education does not come cheap! The cost of putting a kid through an NLU these days (inclusive of stipend and internship expenses etc) is Rs 2.5-3.5 lakhs per year. Making the overall cost of legal education anywhere between 12.5-17.5 lakhs for five years. Apart from NLS and NLU Delhi which provide complete fee waivers and other support to IDIA scholars, none of the other law schools do. Additionally, NUJS provides partial support to one IDIA scholar a year.

Unless we get funding for these kids from donors, it will be difficult to put them through law school. All details for contributions are available on IDIA page at: https://idialaw.com/support-idia/.