IDIA’s Annual Awards and Conference on “Law, Leadership and Creativity” 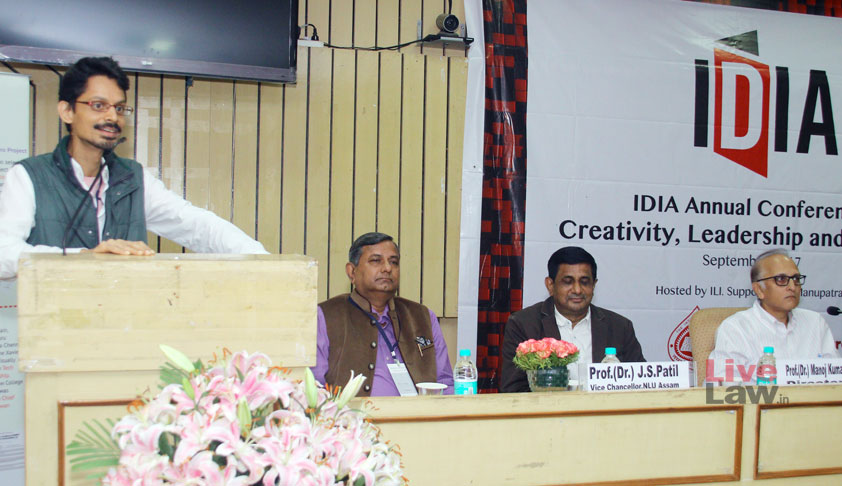 IDIA Charitable Trust (an organisation working towards empowerment of the underprivileged through legal education) recently held it’s IDIA Annual Awards Ceremony and Conference on 15-16 September 2017 in New Delhi. The session rounded off with a CHAMPS training session for IDIA scholars and team leaders on the 17th.IDIA Annual Awards 2017Each year, the IDIA Charitable Trust hands out awards...

IDIA Charitable Trust (an organisation working towards empowerment of the underprivileged through legal education) recently held it’s IDIA Annual Awards Ceremony and Conference on 15-16 September 2017 in New Delhi. The session rounded off with a CHAMPS training session for IDIA scholars and team leaders on the 17th.

The evening began with Justice Gita Mittal meeting with all the IDIA Scholars (underprivileged students trained by IDIA who are now at the various law schools in India). She was joined by Justice Harishankar.

Prof. (Dr.) Shamnad Basheer, Founder and Managing Trustee of IDIA welcomed all the dignitaries to the dias and began by introducing the IDIA movement and the key challenges faced.

Justice Sikri, the keynote speaker congratulated IDIA for doing a commendable job by training IDIA Scholars who could then advocate the cause of their communities in unparalleled ways. He noted that it was important to bridge the gap between “Bharat” and “India”. Speakng about the times when law was regarded as the last option, he was happy that IDIA was engaged in sensitizing more students to law as an attractive career option. Much to the delight of the audience, Prof. MP Singh narrated some stories about Justice Sikri from their days in Law Faculty, when Justice Sikri was a student and Prof. MP Singh a law professor! It turns out Prof Singh sought out Justice Sikri in the library since he had heard that Sikri was the class topper.

The various IDIA awards were then handed out by dignitaries on the dias including Justice Sikri, Justice Hari Shankar, senior counsel Salman Khurshid and Prof MP Singh. The awards were handed out to institutions and individuals that had partnered with IDIA to champion the cause.

Next, IDIA Stars 2017 awards were presented to IDIA’s student Team Leaders, who spent countless hours leading their teams at the various law schools, while balancing their classroom commitments.

This was followed by a creative outpouring of stage performances by some of the IDIA scholars, ranging from musical renditions to poetry reading. Short IDIA videos including one showcasing the stories of two inspirational IDIA Scholars moved the audience. Over dinner, the various guests interacted with IDIA Scholars.

The day after the awards ceremony, IDIA held its Annual Conference on “Law, Leadership and Creativity” in collaboration with the Indian Law Institute (ILI), New Delhi. The conference, supported by Manupatra, focused on various topics relating to law and creativity. Creativity is the first attribute of CHAMPS (Creative Holistic Altruistic Maverick Problem Solvers) - the attributes that IDIA works towards inculcating in its Scholars, and law students.

After opening remarks by Prof Basheer and the welcome address by Prof Manoj Kumar Sinha (Director,- Indian Law Institute), Justice Ravindra Bhat (Judge, High Court of Delhi) gave the foundational address, touching upon various aspects of creativity in the law, and  setting the tone for the rest of the day’s discussions.  He noted that balancing out various competing concerns in law (and particularly in relation to intellectual property law, an area where he had passed some seminal decisions) called for a fair degree of creativity. He explored how the law viewed creativity through the various standards it set for IP protection.

Dr Bezwada Wilson, Ramon Magsaysay Award Winner and National Convener (Safari Karmachari Andolan) delivered a powerful keynote address on “Creative Leadership and Social Change”. He highlighted the fact that despite the constitution beginning its preamble with an avowed commitment to equality and fraternity, these are empty ideals in so far as Dalits and other underprivileged communities were concerned. So long as people feel superior in their consciousness, equality will always remain a distant dream, he said. He spoke in particular about his fight to eradicate manual scavenging and lamented the fact that while we were technologically adept enough to build a rocket to launch 104 satellites, we are yet to develop technology to clean 10 feet deep sewer water. But rely on the oppressed castes, the so called “lower castes” to manually do this!

In the aftermath of the inspirational keynote address, there were two panel sessions. The first was the much awaited panel on “Lateral Lawyering: Lessons from India’s Privacy Battle” with three lawyers/activists who were closely involved with the privacy battle at the Supreme Court. Namely, Dr. Arghya Sengupta (founder, Vidhi Centre for Legal Policy), Dr. Usha Ramanathan (Advocate and Independent Researcher), and Gopal Sankaranarayanan (Advocate, Supreme Court of India)who discussed their diverse view points on right to privacy. Dr Sengupta began the panel discussion by arguing that while the right to privacy decision had a huge symbolic value, but didn’t really do much, since this right was already embodied in Article 21 as a component of “personal liberty”. Gopal Sankaranarayanan strongly disagreed, and stressed that in not just articulating a strong right to privacy, but also killing the mischief in ADM Jabalpur and the notorious SC decision in the 377 case, the decision was of monumental significance and importance. He clarified that some of his arguments as a counsel for the Centre for Civil Society in the Right to Privacy case (Justice K.S. Puttaswamy (Retd.) v. Union of India) were misrepresented by the media; and that he actually argued in favour of a strong fundamental right to privacy.

Dr Ramanathan spoke about the lawyers for the petitioners who went beyond their call of duty for the case whose impact they were deeply concerned about. They invested their time and money, and spent sleepless nights on it. In her opinion, the case was about the UID project which was started without the backing of any law. She lamented that as a country, we’d moved from civil disobedience to simple obedience.

Justice Hari Shankar questioned the assumption that AI will necessarily be a threat to lawyers, and pointed out the limitation of AI programmes which cannot really replace human “intelligence”. He was also of the view that precedent does not necessarily hamper creativity. Prof. Ranbir Singh applauded the creativity underlying the idea of IDIA and took us back in time to his tenure at NALSAR where he instituted scholarships and fee concessions for those without financial means. On AI, he submitted that lawyers will need to develop emotional intelligence to set themselves apart from the machines. He pointed that areas like Alternate Dispute Resolution will require a lot of creativity and will play an important role in the future.

Mr. Pravin Anand drew from his extensive experience and spoke of a number of IP cases that he was involved in that embodied legal creativity. He also spoke of several initatives that he and his firm had undertaken including an IP comic (Mr IP), an IP play (Brainchild), an IP game (Anaryst) etc.

He ended by highlighting his latest initiative to think up creative brand names and sell them to the highest bidder. One such sale had been made and the proceeds would come to IDIA to fund the education of two underprivileged scholars.

Prof (Dr.) Purvi Pokhariyal spoke about inter-disciplinarity and how it was absolutely essential to cultivating creativity. She also spoke about how Nirma was trying to implement the CHAMPS methodology to generate more lateral thinking in their classes. She spoke on the need to create the new policy advocate/lawyer.

The session ended on a hugely inspirational note from Prof (Dr) JS Patil who spoke of his personal experiences in taking the students outside the classroom to file PILs etc in the 1980’s! And being hauled up by his administration for teaching outside the “classroom”! He spoke of how he was inspired by the ideals of Jaiprakash Narayan and call for a total revolution. He advised students to break the bounded walls of classrooms and learn from wherever they could.

A vote of thanks was delivered by Shreenibas Chandra Prusty, (Registrar, Indian Law Institute).

On Sunday (17th September), IDIA held its CHAMPS training workshop for all IDIA scholars and team leaders. The first half involved discussions around ways to beat stress, improving language skills and mental health issues. What was clearly emphasized was that IDIA scholars did not need to “fit into” any one mould, but could retain their distinct individual identities.

Prof (Dr.) Basheer then discussed the T-FLIP methodology, a unique innovative pedagogical set of techniques developed by IDIA and one which lies at the heart of the CHAMPS training initiative. T-FLIP stands for “Theme based, Flipped, Inter-disciplinary and Poly-centric Linked Learning”, where each unit of learning has multiple sites of enquiry and is more "divergent" than "convergent".

The new pedagogy entailed a “Back to Basics” approach, where only the foundational legal cases and concepts in each legal discipline would be taught. Prof Basheer highlighted Elon Musk’s learning techniques where the focus would be on building the semantic tree trunks/roots, such that the students could add informational “leaves” on their own!

He then demonstrated this new pedagogy through the landmark torts case of Donoghue v. Stevenson. Highlighting the importance of linked learning, he showcased how the case also involved a patented invention (the ginger beer float), how it reflected legal realism (Lord Atkins being a staunch Christian and waiting for a case like this to infuse the law with moral standards such that negligent manufacturers could be taken to task!). Also, how this foundational case reflected legal creativity by Lord Atkins (in turning the concept of “dangerous goods” on its head) and how the case paved the way for statutory reform and food and drug laws etc.

He emphasized how the case should be studied as a story, a linked piece of learning. As opposed to rote learning, students should work to internalize the case and completely understand it in a manner that will ensure that they never forget it. The next step was to externalize it, where students would form their own opinion/perspective about the case and articulate it. Even creatively by making a song and dance about it (no pun intended!). Prof Basheer spoke about how his first cohort of CHAMPS students were now trying to externalize case learning by tracing an Indian case (Dinesh Samanta vs State of west Bengal) where a dead frog was found in a cough syrup and yet the manufacturer went scot free! A PIL is soon going to be filed on this.

After three exciting days, the IDIA family finally packed their bags, but carried back many important learnings, stories, memories and friendships!