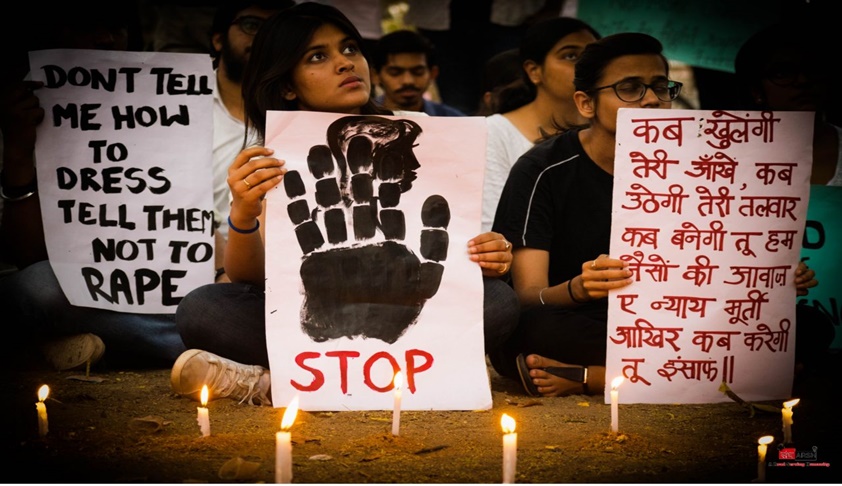 Team Sangharsh on 18/04/2018 held a protest in Chavani Sector - 6, Gandhinagar against the rape crimes being committed in our country. The protest was organized by law students of Institute of Law, Nirma University. The protest was organized after obtaining due permission from the executive magistrate of Gandhinagar after completing all the formalities required as per law.

The aim of the protest was to inculcate sensitivity within youth of the country against such barbaric crime like rape. The student fraternity gathered together to initiate their commitment towards building a safer India for women and girl child demanding for severe and stern action on any crime against women. Any crime against women should not go unnoticed and need of the hour is to bring a change in the mindset of the society in addressing such concerns. The students reflected their solidarity towards the rape victim by speaking out their mind at the venue and igniting candle lights in their support. The emphasis was laid on the kind of India the youth aspires to see in future while pointing out the failure that we have witnessed and are a part of the same ranging from poverty, corruption and issues pertaining to safety of women which are still unsettled even after 71 years of independence.

It has been now much important to raise your voice instead of accepting injustice with hands down. The given protest was a symbolism of unity and integrated efforts of the student to stand against any inhume act against women of our country. As it is correctly said that revolution cannot be brought in a day or two, it needs time and constant efforts to bring a change in the society and with the same spirit all the students gathered there to spread the word “Justice” and disseminate that sense of responsibility to work for preventing rape incidents as one’s own prerogative and agenda.

Team Sangharsh extends it support to all the victims and assures everyone to raise their voice against any such savage activity against women. The team aims to make the voices of victim heard to the concerned authorities at different places along with the support of the youth of our country and hence encourage them to take such initiative wherever possible for preventing travesty of justice.