ILNU To Conduct Various International Courses And Lectures In September 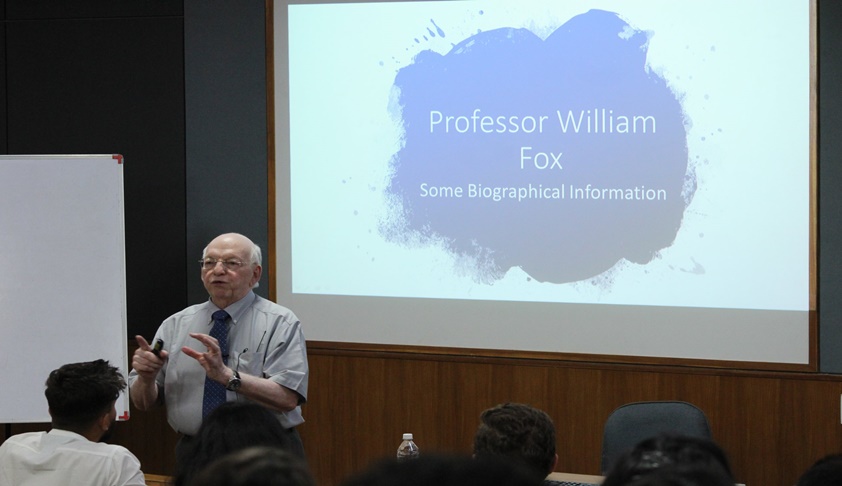 Institute of Law, Nirma University (ILNU), in September, is organising various lectures and certificate courses by the professors of international repute. In the list of events, the first one was a lecture by Prof. Stephen Barnes, Assistant Dean, Graduate and International Programs, Penn State Law on the topic ‘U.S. Constitution and Impeachment Powers’, where he discussed that US constitution has very vaguely left the impeachment process undefined as to how high should a crime be so that a president can be impeached. He also talked about the impeachment process being very complex and referred to the historical instances of impeachment in US that had never passed above conviction process. He referred to examples like Johnson, Richard Nickson and finally Bill Clinton. He also concluded by saying that maybe Donald Trump as President faces the same fate of impeachment procedure after mid-term elections. But, he was happy that the procedure of impeachment is complicated as not any ruling party can mishandle president position and rule out a president whenever they want.

A certificate course was conducted by Prof. Shamnad Basheer, Founder (IDIA/ SPICY IP/ P-PIL) and Visiting Professor of Law, NLSIU, Bangalore from 10th September to 12th September 2018 on topic of ‘Case to "Case Plus" Method: A New Pedagogy’ where he organised courtroom proceeding for the famous case of Donoghue v. Stevenson. He also talked about a certain new case reading mechanism where individuals can link many contemporary topics and cases while reading the original case benefiting students to widen their learning scope.  He also conducted a major discussion on Adhaar.

A course is currently being conducted by Prof. William Fox, Former Dean and Professor of Law, Columbus School of Law, USA on International Business Transactions from 10th September to 10th October 2018.

ILNU is also hosting Prof. Jen Berg, Founder, Responsibly Rouge, LLC, Portland, Oregon for conducting a course on Skill-Lab Critical Thinking and Decision Making from 10th September to 30th September 2018. The course will be focussing on the development of soft and managerial skills of students at initial level as part of curriculum structure so that they can be market ready.