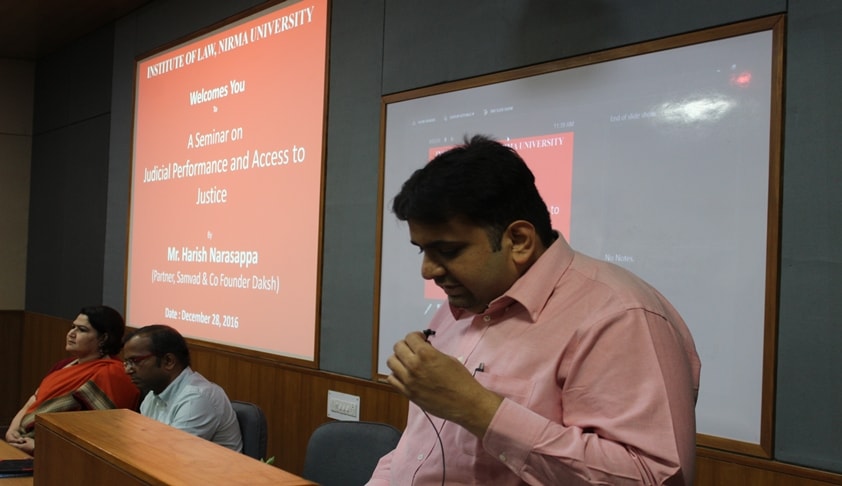 Subscription starts from
₹ 599+GST
(For 6 Months)
View Plans
Premium account gives you:
Subscribe Now
Already a subscriber?
Login
The Centre for Social Justice, Institute of Law Nirma University conducted a seminar 'Judicial Performance and Access to Justice' on Wednesday, 28th December, 2016. The speaker for the session was Mr. Harish Narasappa, founding partner of Samvad Partners, a leading national law firm in India and co-founder of Daksh which is a Bangalore-based independent, not-for-profit organization.

Mr. Harish addressed many questions related to the over-burdening of courts with cases and if the data collected by social organizations is reliable in terms of the number of cases that are reported to be yet decided. He additionally talked about how the decisions given by judges impact the judiciary and public at large. Access to Justice was to help the poor people through projects like Plead for India, providing Legal Aid to make them aware of their rights and make the judicial system more efficient, he added.

He further spoke about Judicial Efficiency and pointed out the problem faced by judges of being fair and reasonable in all the cases they decide which to an average that ranges from about 70-80 cases per judge. He referred to “Justice” as a civilization’s goal and not only as a citizen’s goal. Justice is uttermost important as respect for law and order can only come when Justice is achieved.  He concluded by saying that the judicial performance of judges and Judiciary as whole cannot be measured only based on the number of cases that are decided but it has a task beyond that to achieve.