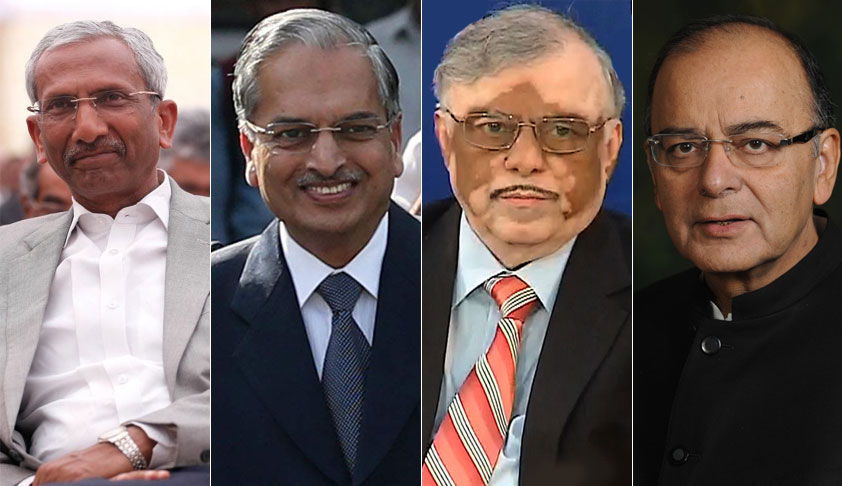 "The Tribunals should not be heaven for retired persons and appointment process should not result in decisions being influenced if the Government itself is a litigant and appointment authority at the same time. There should be restriction on acceptance of any employment after retirement "- A Bench headed by Justice Adarsh Kumar Goel quoted and broadly approved the Amicus report, in...

"The Tribunals should not be heaven for retired persons and appointment process should not result in decisions being influenced if the Government itself is a litigant and appointment authority at the same time. There should be restriction on acceptance of any employment after retirement "- A Bench headed by Justice Adarsh Kumar Goel quoted and broadly approved the Amicus report, in Rojer Mathew v. South Indian Bank Ltd on May 7, 2018.

These appointments, which took place within a short span of the retirements of the said judges, have raised quite a few eyebrows. The immediate appointments suggest that decisions regarding their post-retirement assignments were already taken, at least in principle, by the respective governments even during the tenure of the judges. Even before their retirements, rumors were rife amongst the members of the bar regarding the finalization of their post-retirement posts. This certainly casts a cloud over judicial decisions rendered during their tenure in cases involving stakes of the respective governments, as the executive has a major say in appointments to quasi-judicial bodies. Irony stares stark at Justice A.K Goel who accepted the appointment by Central Government as the Chairman of NGT on the very same day of his retirement, as the bench headed by him was dealing with the issue of restructuring of Tribunals in the case Rojer Mathew v. South Indian Bank Ltd. There, the amicus curiae Senior Advocate, Arvind P Datar had suggested as follows.. "The Tribunals should not be heaven for retired persons and appointment process should not result in decisions being influenced if the Government itself is a litigant and appointment authority at the same time. There should be restriction on acceptance of any employment after retirement "-. The bench said that they 'broadly accepted' the concept note , while dealing with the need to restructure tribunal system.

The debate gets weighty on noting that the judges had dealt with sensitive  issues during the twilight of their tenure. Justice R.K Agrawal headed the bench which dismissed the petition questioning the Centre's appointment of R.K Asthana as CBI Special Director, and also the petition seeking an investigation into corruption allegations in the Prasad Education Trust cases which was decided by the bench of Chief Justice of India. Justice R.K Agrawal was also part of the specially constituted bench which annulled the order of the bench of Justice Chelameswar which had ordered a special investigation in the medical college bribery case. Therefore, Justice Agrawal had dealt with cases involving stakes of the Central Government and the Chief Justice of India. The appointment of Chairman of NCRDRC is made by the Central Government on consultation with the Chief Justice of India. In that backdrop, a dispassionate observer cannot be faulted for doubting the presence of bias in the judicial process leading to these judgments in the light of the immediate post-retirement assignment given to the judge.

As regards Justice Antony Dominic, as the Chief Justice of the High Court of Kerala, he happened to deal with cases which had the potential to politically affect the ruling party in Kerala. This is not to suggest, even remotely, that their judgments are wrong or biased. The only endeavor is to underline the fact that immediate post-retirement appointments of the said judges create a cloud over the sanctity of those judgments, irrespective of their merits. As it is well settled, the actual existence of bias is not required to vitiate the sanctity of judicial process; the perception of bias, founded on grounds which are not too far-fetched and hypothetical, taints judicial process.  The judicially accepted test of bias is the reasonable likelihood of bias and not the actual existence of bias( Rattan Lal Sharma v. Managing Committee AIR 1993 SC 2155). The significance of the oft-quoted adage 'justice should not only be done but also seem to be done' gets more profound in this context.

Similar questions arose when former Chief Justice of India P. Sathasivam was appointed as Governor of Kerala. It had led to a chorus of criticism that he was being rewarded for favouring the ruling party.  Justice Sathasivam however denied that his appointment had anything to do with his judgment quashing the second FIR against BJP President Amit Shah in the Tulsiram Prajapathi case. As Governor of Kerala, Justice Sathasivam had to negotiate embarrassing situations, when he had to sign an ordinance mooted by the Government to get over a Supreme Court decision, and when that Ordinance was later stayed by the Supreme Court.

Judges accepting jobs under the Executive certainly creates situations of conflicts of interest. It tends to undermine public faith in judicial independence. In the recent 'master of roster case,' the Supreme Court reiterated that public confidence was the greatest asset of the judiciary, and observed as follows:-

The faith of the people is the bed-rock on which the edifice of judicial review and efficacy of the adjudication are founded. Erosion of credibility of the judiciary, in the public mind, for whatever reasons, is greatest threat to the independence of the judiciary.

Immediate acceptance of post-retirement assignments certainly creates a dent on public confidence in judicial independence.  Justice Chelameswar declared that he will not take up any post-retirement assignment given by the Government. Justice Kurian Joseph has also made open his reluctance to accept such jobs. According to them, judiciary and executive should remain mutual watchdogs than mutual admirers, and post-retirement offers can lead to erosion of judicial independence. Justice B. Kemal Pasha, retired judge of the High Court, who raised dust with his controversial remarks in his farewell speech spoke against this practise as well. "When a judge is expecting a post-retirement job from the government,  normally he will be in a position not to invite displeasure from the government at least in the year of his retirement. There is a common complaint that such judges do not dare to invite displeasure from the government by expecting post-retirement jobs," he said while recollecting the words of Justice S H Kapadia and Justice TS Thakur that no judge should accept any salaried job under any government at least for a cooling period of 3 years from his or her retirement.

At the same time, to squander the wealth of experience and insight of retired judges is also not ideal. There has to be mechanism to channelize the potential of retired judges back into the system. At present, most statutory commissions/tribunals require to be headed by retired judges of the Supreme Court or High Court.

In this regard, the suggestion regarding a "cooling off" period for appointment of retired judges as mooted by former CJIs Justice Kapadia, Justice Lodha and Justice Thakur assumes relevance.  Former CJI Justice Lodha had stated that he would not take any post-retirement benefit for a period of two years after retirement.

Arun Jaitley, in his capacity as the Leader of Opposition in Rajya Sabha in 2012, had advocated for a cooling off period for Judges, saying that "pre-retirement judgments are influenced by a desire for a post-retirement job".

"My suggestion is that for two years after retirement, there should be a gap (before the appointment), because otherwise, the government can directly or indirectly influence the courts and the dream to have an independent, impartial and fair judiciary in the country would never actualise," Jaitley had said.

But irony couldn't get starker when Jaitley's party, after assuming power at Centre, enthusiastically offered immediate post-retirement offers to judges- Justice P. Sathasivam, Justice Aggarwal and Justice Goel. Also, the present government has included a lot of provisions in the Finance Act, 2017, which cuts at the root of judicial independence. These provisions have the potential to affect the independent working of several quasi judicial bodies like NGT, NCDRC etc.  They amend the provisions of parent Acts of various Tribunals, and delegate the power to appoint and prescribe qualifications to the Central Government through rule-making. Thus, the composition and working of Tribunals can be regulated through executive rule making. These provisions have been challenged in the Supreme Court on the ground that they infringe upon the doctrine of separation of powers and undermined the independence and autonomous functioning of bodies. The Madras High Court, dealing with the issue, ordered that all appointments made to Tribunal as per the 2017 amendment will be subject to the final result of petitions challenging the amendments.

In Madras Bar Association v. Union of India, AIR 2015 SC 1571, the Constitution Bench of the Supreme Court had held the National Tax Tribunal to be unconstitutional, as its composition impinged on judicial independence and separation of powers, which were held to be basic features of the Constitution. "It is not possible to accept that a party to a litigation, can participate in the selection process, whereby the Chairperson and Members of the adjudicatory body are selected", the Court had observed in that case. Hope these observations ring a bell with all stakeholders. To say the least, the swift jump from one branch to another does not look graceful.

Manu Sebastian is a lawyer practicing at High Court of Kerala.
[The opinions expressed in this article are the personal opinions of the author. The facts and opinions appearing in the article do not reflect the views of LiveLaw and LiveLaw does not assume any responsibility or liability for the same]
TagsCentral government Justice A K Goel Justice Antony Dominic Justice R.K. Agrawal National Consumer redressal Commission Post-Retirement Appointment
Next Story
Similar Posts
+ View more
Law Firms
+ More