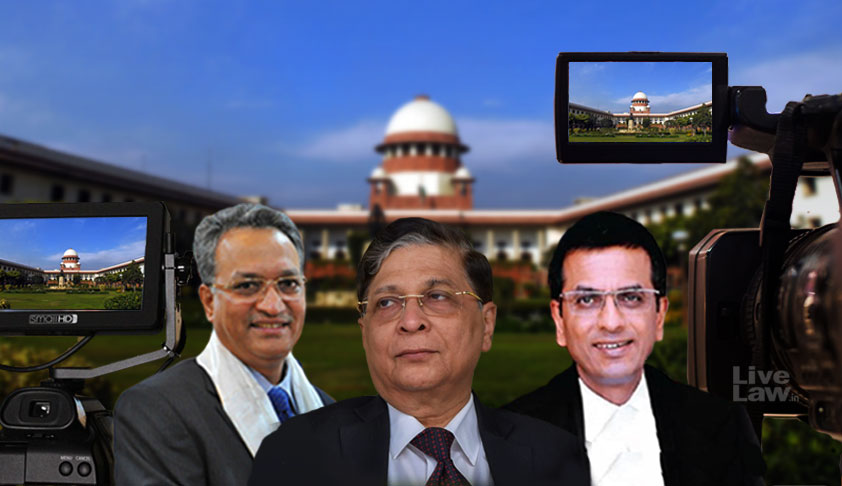 The Supreme Court on Friday granted further two weeks’ time to the Centre to frame comprehensive guidelines on the live streaming of court proceedings after considering the views of interested parties.In addition to those before the Constitution bench, the bench of Chief Justice Dipak Misra and Justices A. M. Khanwilkar and D. Y. Chandrachud seemed inclined towards matters of public...

The Supreme Court on Friday granted further two weeks’ time to the Centre to frame comprehensive guidelines on the live streaming of court proceedings after considering the views of interested parties.

In addition to those before the Constitution bench, the bench of Chief Justice Dipak Misra and Justices A. M. Khanwilkar and D. Y. Chandrachud seemed inclined towards matters of public importance before three-judge benches also being live telecast.

The bench was of the opinion that such live streaming would also address the grievance of law interns who are restrained from entering courtrooms on Miscellaneous days to prevent a congregation of crowds in the courtrooms.

Earlier this month, In a significant step towards transparency and accountability, the idea of live streaming of court proceedings in all matters, except where the hearing is held in camera, in rape cases and matrimonial disputes had found favour with the bench as well as Attorney General K. K. Venugopal.

Elaborating on the numerous benefits of the live telecast, the AG had advanced that it would enable litigants commuting from distant states such as Tamil Nadu and Kerala to conveniently follow the Supreme Court proceedings.

“Knowing that the entire country can watch them, there will be fewer interruptions and raised voices on the part of the advocates...it will be a great lesson for them...if we observe the hearings in the British courts, we can see how sober and dignified they are...”, continued the AG.

“As a principle, every member of the bar must learn to be disciplined, whatever may be the case”, agreed the Chief Justice. “Let them show the world how indisciplined they are...” chipped in the AG in a lighter vein.

“It will also check the tendency of advocates to seek adjournments...the litigants will be able to see how many times the advocate requested and for an adjournment and why”, commented Justice Chandrachud. “When the counsel seeks an adjournment, it means he is not prepared and this is not admissible”, added the Chief Justice.

The AG submitted that live streaming of the court proceedings would also address the issue of voluminous crowd of unrelated advocates, litigants and others hoarding the courtrooms.

“It would also go a long way in the training of the interns who wish to learn from the highest court of the country and who are the future lawyers...ultimately, the suggestion is that the proceedings of all courts and not merely the Chief court or the Constitution benches should be shown...”, he concluded.

Agreeing that all cases and not merely the matters before the Constitution bench should be aired live, the bench also reflected that the live broadcast of important matters would significantly aid legal education in law schools.

Enumerating another advantage of the live streaming, Ms. Jaising said that the same would qualify as an official record, in the light of the rising trend of live tweeting which may be inaccurate and misguiding.

“Our courts anyway have open access...the need for an entry pass is only a minimal security requirement...when we already have open courts and public hearings, live streaming is only an extension of the concept; an extrapolation by way of a ‘virtual’ open court...”, weighed in Justice Chandrachud.

“Conceptually, we have an open court, except where the trial is required to be held in camera under a statutory provision (like section 22 of the Hindu Marriage Act, 1955)...the litigant has the right to know how their matter is being dealt with...the concept of access to justice can be expanded to enable them to know what is happening on their lis and how their lawyer is presenting their case even though they are not in court...”, observed the CJ.

“Matters involving security concerns, matrimonial disputes and such other cases as Your Lordships’ may deem fit can be excluded from the recording”, recommended the AG.

“Matrimonial cases as a class must be excluded...parties would not want their names and why the divorce was granted or not granted to come in public eye...there can be no telecasting of rape cases...there may also be other matters having implications on the privacy of the parties...”, concurred the CJ.

Urging that there be no unauthorised reproduction of the content of the court proceedings which are live streamed, Ms. Jaising cited the example of UK where official agreements are entered into with broadcasters on a non-commercial basis.

“Nobody should be allowed to make money out of it”, she stated.

“Like the Lok Sabha and Rajya Sabha, the Supreme Court may have its own channel”, ventured the AG.

When the bench had inquired if there was any counter-view at the bar, an advocate had suggested that the knowledge of being watched may encourage some lawyers to “over-perform” resulting in a bigger congregation.
In response, CJ Misra had remarked, “there is no under-performance or over-performance, only performance...this is the difference between advocacy and legal advocacy; the latter has substance while the former is devoid of any...”

Another advocate had cited the dangers of the telecast of proceedings prior to any conviction, at the stage when only the evidence is being appreciated.

At the previous hearing on July 23, the AG had suggested that the live streaming initiative be undertaken on a pilot basis initially only in respect of the Constitution bench matters to ascertain its technological stability and its impact on lawyers, judges and the general public.