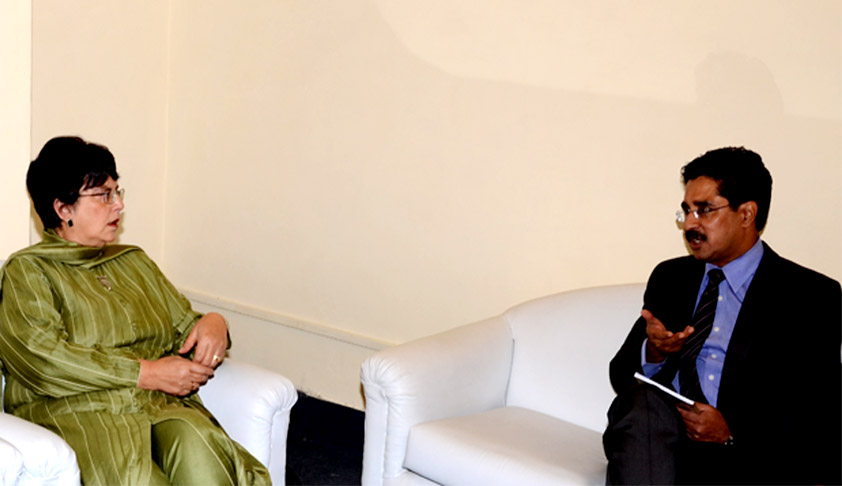 Baroness Usha Prashar was appointed as the first chairman of the Judicial Appointment Commission in the UK in September 2005. She is currently a member of the House of Lords. She was instrumental in bringing far reaching changes to the appointments process; making it transparent, widening the selection pool, eliminating elitism and bringing in diversity.In this conversation with Santosh...

Baroness Usha Prashar was appointed as the first chairman of the Judicial Appointment Commission in the UK in September 2005. She is currently a member of the House of Lords. She was instrumental in bringing far reaching changes to the appointments process; making it transparent, widening the selection pool, eliminating elitism and bringing in diversity.

In this conversation with Santosh Paul, (Advocate, Supreme Court) for Live Law, she spoke at length about UK’s model of JAC and the proposed JAC in India.

Santosh: You will appreciate the tremendous enthusiasm in understanding the United Kingdom’s model of the judicial appointments commission (JAC) in view of the pending bill in Parliament for constitution of a Judicial Appointments Commission in India?

Santosh: Did the Lord Chancellor determine the composition of the first JAC or did it have an appointment process independent of the government?

The composition of the Judicial Appointment Commission is stipulated in the 2005 Constitutional Reform Act. It states the number of members it should have, how many should be the lay members and how many judicial and legal members it should have. In total it has 15 members, including the Chairperson. It also states that the Chairperson of the Judicial Appointment Commission should be a lay person and not a lawyer.

Santosh: Can you explain the methodology adopted in appointing the first JAC in the UK to ensure they from free from the Government? And are the current members of the JAC appointed?

Baroness : Apart from the three judicial members, who were selected by the Judges Council, all the others members of the Judicial Appointments Commission were appointed through a fair and competition. The panel which selected the members was chaired by an independent person of high standing and the person from the Public Appointments Commission was also a member as was then the Lord Chief Justice. Once the Chairman was selected (that was me), I then sat on the panel to select the other commissioners.

So the process was open and transparent and that is how the current JAC members were appointed.

Santosh: Would you agree that prior to the Constitution Reforms Act, 2005 and creation of JAC in 2006, the British Judicial appointments was a system of political patronage and where family and social connections mattered more than merit?

Baroness : Prior to the establishment of the Judicial Appointment Commission the process for appointing judges was opaque .There was also a feeling that the judiciary was drawn for a homogenous group of people. Change was seen as necessary not because of patronage but to make the process open and to widen the pool of potential eligible candidates. The criterion for appointment is and was always merit.

Santosh: Has the JAC been able to rid dynasticism in the appointment process i.e. siblings and relations of Judges having an unfair edge in being appointed as judges?

Baroness : Establishment of the Judicial Appointment Commission has made the process more open. It has succeeded in widening the pool. I think by widening the pool and making the process open, we have seen an increase in the appointment of women and solicitors as judges. So change is being happening though not as fast as we would like.

Santosh: In your tenure as the Chairman of the Judicial Appointment Commission, UK, did you feel the pressure of the judicial and the executive wings of the Government to influence the appointments?

Baroness : The Judicial Appointments Commission is an independent body. It is funded by the Ministry of Justice and its membership is finely balanced. It has 8 lay and 7 legal members. Obviously, when JAC developed its processes for selecting Judges, it made sure that there was appropriate involvement of and consultation with the judiciary. The powers of the Lord Chancellor to reject a recommendation made by the Judicial Appointments Commission are restricted. If he does not accept the recommendation made, he has to give reasons and the JAC has to consider the reasons and can reject or accept the reasons. So the act is very carefully drafted. Appropriate involvement of the judiciary and the executive is finely balanced.

Santosh: Has the JAC in the U.K been able to eliminate the charge of elitism in the appointments process?

Baroness : The charge which we have been able to eliminate is that the process is now open and transparent and, those who felt that  they did not have a fair chance before now feel that they have an opportunity to apply and that their application will be considered on merit.

Santosh: The Peach Report:  `An Independent Scrutiny of the Appointment Process of Judges and Queens Counsel in England and Wales’ defended the regime of `the secret soundings’ as a `valuable input as one part of the assessment’. You put an end to the secret soundings. Do you have any second thoughts on it?

Baroness : Yes, there were criticisms of “secrets sounding” and “tap on the shoulder”. “Secret soundings” meant that consultations were not open and there were suspicions about this system of appointing judges.

What has happened with the new process is that judges are consulted, but this is now done openly and candidates know that there is consultation. The candidates can also provide names of referees.  In that sense the process of consultation is open and people know the consultation takes place.

Santosh: According to you has the selection of judges by the JAC entirely been based on merit and has the process been transparent, fair and ensured open competition from the widest range of eligible candidates?

Baroness : Yes, again it is stipulated in the Act that selection must be on merit and  merit alone. I think the) JAC has succeeded in showing that you can widen the pool from where the eligible candidates are drawn and appoint on merit. In other words merit and diversity are not incompatible.

Progress in diversifying the judiciary is slow but the reasons for this are not solely due the selection process but other systemic factors.

Santosh: Has the Ombudsman been able to redress the grievance of the rejected candidates in a fair manner?

Baroness : In the first instance candidates complain to the JAC and   if the JAC doesn’t satisfy them, then they can go to the Ombudsman. The Ombudsman also deals with disciplinary matters. I think he receives more complaints on the disciplinary matters than on recruitment which says something about the fairness of the selection system.

Santosh: The Ombudsman is appointed by the Queen on the recommendation of the Lord Chancellor. Does that not go against the grain of the philosophy of the Constitution Reforms Act, 2005 of the Executive abdicating its role in the appointment process?

Baroness : I do not agree. It is to ensure that there is an independent complaints process.

Santosh: Now coming to the touchy topic of diversity in the composition of the judiciary. Do you think JAC has been able to significantly bring in diversity by appointing less represented groups and women in the bench?

Baroness : Lack of diversity was one of the reasons why the JAC was set up. I think that JAC has succeeded, in a limited way, to bring about diversity particularly in the lower courts, that is, district courts and circuit courts and to some extend the High Court. But it has not been as fast as one would have liked. There is frustration and impatience that women and minorities are not making progress particularly in the senior judiciary, that is, the Court of Appeal and the Supreme Court. I believe that the appearance of the JAC on the scene has acted like a litmus paper.  It highlighted other structural and systemic issues which needed to be tackled. Giving confidence to people to apply and making the selection process fair is only part of the story. Steps need to be taken by the professions to diversify the legal profession and by the judiciary itself to look at its working practices. There are a whole range of other issues like retention of women lawyers, maternity leave and working practices which need to be looked at.

Widening the pool is also the responsibility of the legal profession and the judiciary. Issues such as creating conducive working conditions and the way transfers and promotions within the judiciary take place also need attention. Bringing about diversity is a joint endeavour.

Santosh: Jack Straw had lamented `the assumption on diversity – naïve as it turned out – was that if we changed the process, we would change the outcome.’ There have been similar criticisms from other quarters that the object of diversity has not been achieved by the JAC. Any comments?

Baroness : It was naïve but at least, as I said earlier, it is now clear what other steps are necessary by everyone concerned to bring about change.

Santosh: What the government in India is proposing is a JAC with 3 judges and 3 political persons. Do you think it’s a safe arrangement for guaranteeing judicial independence?

Baroness : It is difficult for to me to comment on what India is proposing. Each country has on its own history and its own processes. The only thing I would say is that how judges are selected and appointed is becoming increasingly important given the changes that are taking place in our respective societies.  Independence of the judiciary is critically important as is its legitimacy and accountability. What I think is of paramount importance is that the method of selecting  or appointing the judges is impartial and that appointment is on merit, that is based on the ability to do the job. In our system we spent a great of time in determining what merit is.   All I have tried to do in this interview is to describe how we did it. In each system there are tensions and controversial issues.  What lessons you draw from our experience is a matter for you.

Baroness : There were fears that this might happen. This fear has turned out to be unfounded. Applications have continued to increase and the quality of the appointments continues to be high.

Santosh: Unlike the UK here in India the Constitution and how it came to be interpreted is politically loaded. For instance, right to property under the Constitution came to thwart the land reforms legislations.  Amartya Sen is of the view that China’s leap forward has been on the strength of the Land Reform Movement which pulled out 300 million people out of poverty and could develop human capital requisite for a modern economy. My question to you is whether the larger economic and political philosophy of the candidates are considered by the JAC?

Baroness : No. Judicial Appointment Commission does not ask questions about what the economic or political philosophy is. The JAC has clearly stated qualities it is looking for and candidates are assessed against those qualities and abilities.

Santosh: Any piece of advice on the proposed judicial appointments commission to be set up here in India?

Baroness : As the inaugural Chairperson of the JAC I believe that the independence of those selecting the judges is of paramount importance. If the body which selects the judges is not impartial and independent then I think people will question the appointments made and the independence of the judiciary will be compromised. Whatever system you construct you have to make sure that the composition of the selection body is independent and that body implements its processes fairly and openly.