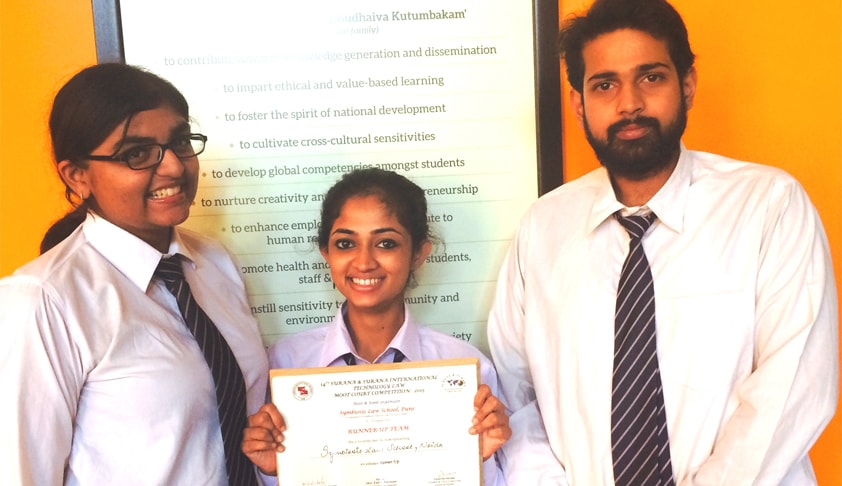 Surana &Surana International Technology Law Moot Court Competition is one of the most prestigious competitions around the world. It was held from 21st to 23rd  August 2015.The event witnessed an impressive participation of 34 teams including NALSAR, Hyderabad, WBNUJS, Kolkata, GNLU, Gandhinagar, RMLNLU, Lucknow, HNLU, Raipur, NLU, Odisha, NLU, Assam, RGNLU, Patiala and...

Surana &Surana International Technology Law Moot Court Competition is one of the most prestigious competitions around the world. It was held from 21st to 23rd  August 2015.

LiveLaw:  How do you feel after such a big achievement?

Team: We feel good and it is only encouraging us to do as well if not better in the next moot we participate in.

LiveLaw: What was your motivation behind opting for the reason behind doing this moot? Why did you decide to do this moot?

Team: This was a tough call as we were given this moot with only a ten days in hand, we initially had our doubts in participating but then International Law is a subject that interests all of us and the moot problem covered a new aspect of International Law that none of us had worked on before, so we decided to give it a shot.

LiveLaw:  What difference did you find at Surana &Surana International Technology Law Moot Court Competition and other moots?

Team: The organization part is the best, the hospitality, the way it is conducted and the organizers make sure that discretion and transparency is maintained.

LiveLaw: What is the most important thing you learnt while preparing and competing this moot?

Team: Teamwork and good research are two of the most important things for a team participating in any moot.

Team: It was a new topic with a lot of technicalities that were hard to understand initially but formed the basis of our arguments.

LiveLaw: Did any one of you feel like giving up at any point of time? If yes, how did

you guys motivate each other?

Team: We were determined to do well for this moot and there was never a point where we felt like giving up.

Team:  We’ve all mooted before and it was luck that we ended up working together.

Team: Everyone took up one major issue and worked on it which we then discussed and compiled.

LiveLaw: What strategy the team made to prepare for the moot?

LiveLaw: Was drafting the memorial more hard or preparing for the orals rounds? How did you prepare for the oral rounds?

Team: Drafting the memorial was comparatively harder. We gave pleadings to seniors and to each other till we felt confident enough.

Team: Our college faculty provided us with a lot of guidance while we were preparing for the moot.

LiveLaw: How many National and International Moot Competition have you guys

participated in and won?

Team: We are all interested in International Law. IPR and Criminal Law are also areas of interest for us.

Team: Time management became one of the most important things for us. We did have our internal exams during our preparation but we managed both.

LiveLaw: How many months prior to the moot competition the team started its preparation?

Team: We did this moot with 20 days in hand.

Team: Ashutosh will pursue litigation as his career. Malavika and Niharika want to pursue higher studies abroad in the areas of IPR and International Law.

LiveLaw: How was it like working with the team? What were your team’s fortes?

What roadblocks did you guys face?

Team: It was good working with the team. This is the first time the three of us have worked together for a moot. We talked out any disagreements and got past all hurdles.

LiveLaw: Which area of technology does the moot question based on?

LiveLaw: Does speaking/ oratory skill really matters or the research alone will suffice to get through the moot?

Team: Both are equally important.

Team: We went up against 5 teams and went against the same in twice, we believe every one was well prepared and thorough with their research.

LiveLaw: What do you think got you success to reach to finals?

Team: Yes, it is the content put in the memorial which is the basis of all our arguments, but then at the time of pleadings the legal acumen and prompt thinking is as well needed.

LiveLaw: Any tips you would like to give for the students who are planning to go Surana & Surana International Technology Law Moot Court Competition in the coming years?

Team: Yes, do proper research and practice and structure your pleadings.

LiveLaw: What do you think about the law for Technology in India? What changes would you like to bring in Indian law when it comes to technology?

Team: Technology has increased the methods and possibilities of commission of traditional and modern crimes. A person sitting in one part of the world may commit a cyber crime in another part of the world. Indian government has now decided to formulate a cyber crimes prevention strategy for India. There are Cyber Insurance Policies In India, Initiatives to make ‘Gmail And Yahoo’ Make Telephone Number Mandatory For Opening New Accounts, Cloud Computing Legal Issues In India,  FDA Urged Central Maharashtra Government formulating Policy Regarding Online Pharmacies Operating In India, Indian Enterprises And Government Increasing their Spending On Cyber Security Infrastructure, Legal Recognition To E-mail Communications Among Government Departments in Madhya Pradesh, Illegal Online Pharmacies And Healthcare Websites In India Need being Curbed and Cyber Law Obligations Of Directors Of Indian Companies Under Indian Companies Act, 2013 which are to be followed. All of this clearly shows the progress in India with respect to Technology Law.

LiveLaw: What are your comments on the removal of Section 66 (A) of Information Technology Act, 2008?

Team: It was indeed a historic moment that Section 66(A) of the Information Technology Act, 2008 was declared unconstitutional. The Publics right to Know was directly affected by this Section as pointed out by the learned judges, J Chelameswar and R F Nariman . Indeed the terms in the Section terms like “annoying”, “inconvenient” and “grossly offensive”, are vague as it’s difficult for the law enforcement agency and the offender to know the ingredients of the offence. The Section termed as Draconian is in direct conflict with freedom of speech which is one of the fundamental rights under Article 19 of the Constitution. This Section has been misused a lot owning to its vague definition hence it was a justified descion by the Honorable Superme Court that it was declared unconstitutional.

LiveLaw: What message would you like to pass on to the mooters and the non-mooters out there? What is your advice to someone who has never mooted before?

Team: Enjoy whatever you do, mooting is like bungee jumping, at least experience it once.