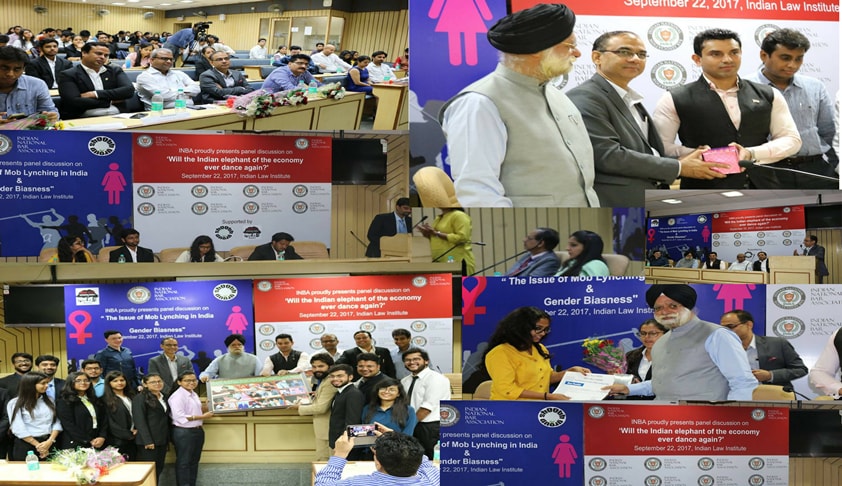 In the backdrop of such increasing differences within the nation, the Indian National Bar Association organised a National Panel Discussion titled, “The Indian National Bar Association Meet (INBAM)”.The first panel discussion was on “Prevention of Gender Biasness in the Corporate World” had speakers from all walks of life. Ms. Merlyn Abraham (Partner, IndLex Partners, Advocates...

The first panel discussion was on “Prevention of Gender Biasness in the Corporate World” had speakers from all walks of life. Ms. Merlyn Abraham (Partner, IndLex Partners, Advocates & Consultants), Mr. Ashok Pandey (Chairman, NPSC & Principal, Ahlcon International School & Member, ShOObh Board) and Ms. Charu Pragya (Social Activist) were the speakers at the session.

As part of this session, the speakers touched upon various issues such as men and women ratio at the workplace, how men are judged on their potential and skills while women are judged on their probability of continuing work post marriage and pregnancy. There was also a discussion on the gap in the number of women who've achieved higher education and the number of women who ultimately join the workforce.

All speakers made some key recommendations on how there can be a change in the processes followed at the workplace to provide women with a more conducive environment where they are able to bring out the best results.

The second discussion was on “Addressing the Issue of Mob Lynching in India” had candidates participating in a live panel discussion. The participants shared their ideas, opinions and suggestions on how the menace of mob lynching can be controlled in a more effective way by introducing appropriate laws and rules. They debated on key issues related to this barbaric act and how the legal system is struggling to save human lives.

At the end of the discussion, the participants prepared a draft legislation to present to the judge’s panel, based on the suggestions that emerged out of the discussion. Some of the important recommendations made at this open forum included the need to have fast track courts to ensure there is immediate sentencing for such severe crimes.

The session on prevention of mob lynching was concluded with a speech by Mr. Poonawala who urged the Central govt. to take appropriate and immediate action in order to set an example for State govts. He insisted that mob violence is still in its preliminary stage and must be controlled now before it becomes a trend in the society. While giving examples of all the recent cases of mob violence and cow vigilantism, he said, “There must be a law against mob lynching for it is truly unacceptable in a civilised society.” He also pointed out that the country's current “demographic advantage is turning into a demographic nightmare”, for young India is indulging in such barbaric acts and creating a hostile environment. He also linked the rising cases of mob killings to the country's falling GDP and economic slowdown.

Mr. Diwakar, on the other hand, highlighted that it is not just the duty of the govt and law enforcement agencies but also the people of India who should come forward to ensure such heinous crimes do not take place in the country. He urged that it is also the responsibility of the citizens to maintain peace and sanctity around their areas.

Mr. K.T.S. Tulsi (Sr. Advocate, Supreme Court of India, New Delhi) later joined the discussion and gave some statistical insights on the growing cases of mob violence. He also said, “It is the government’s obligation to protect the lives and property of the people of this country, and ensure there is a law to address the issue as soon as possible.” While continuing his speech, he moved to the next discussion on “Will the Indian elephant of the economy ever dance again?” As part of this session, he talked about the challenge of reviving the economy post demonetization. He also pointed how the diesel and petrol prices are at a three-year high, which has inflationary tendencies and would lead to an increase in food prices and other products that are consumed regularly.

INBA's Meet was concluded with an award ceremony where one of the shortlisted panelists (Ms. Malavika Rajkumar, Symbiosis Law School, Noida) was declared the winner for her proposal on tackling mob lynching in India. Along with her, other participants were also acknowledged for their contribution in the debate. Later, Mr. K.T.S. Tulsi along with members of the jury was felicitated by INBA as a token of gratitude and appreciation.

The event was supported by shOObh Group Welfare Society, a non-profit community based organization working in the field of community-service and action, education, health, personal growth and improvement, social welfare and self-help for the disadvantaged.

The people behind the Manav Suraksha Kanoon (MASUKA), a bill drafted as part of the National Campaign against Mob Lynching, also made some contribution to make this event a success