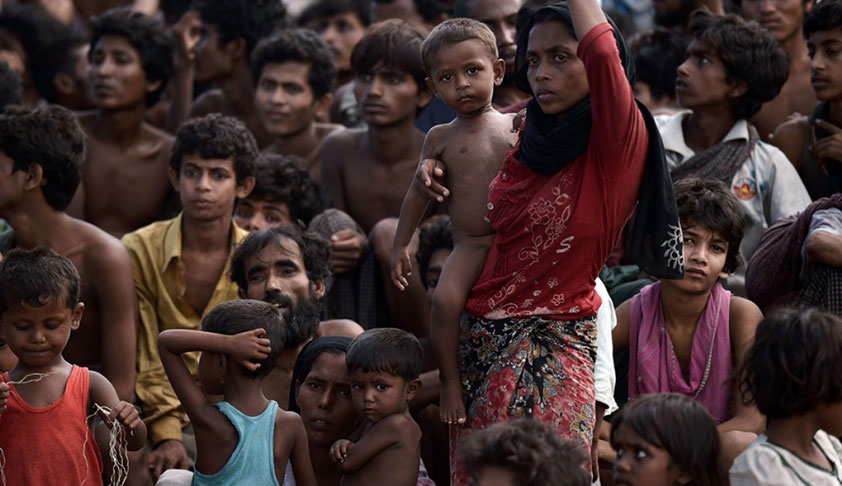 While civil liberties lawyers and organizations rightly fight the legal battle in the Supreme Court to stay the deportation of Rohingya Muslims (refugees) from India as per the directive of the Indian Government, it is pertinent to note the lack of recognition for the displaced persons within the country.Internally Displaced Persons (IDPs) aren’t a new class of persons who have emerged in...

While civil liberties lawyers and organizations rightly fight the legal battle in the Supreme Court to stay the deportation of Rohingya Muslims (refugees) from India as per the directive of the Indian Government, it is pertinent to note the lack of recognition for the displaced persons within the country.

Internally Displaced Persons (IDPs) aren’t a new class of persons who have emerged in the recent past; infact the displacement has been taking place due to armed conflict, ethnic violence, human rights violations since World War I.

Often the status of refugees is conflated with the status of IDPs, however there exist clear and distinct differences between both the movements. Though it is accepted that sometimes the movement of refugees and internally displaced persons’ overlap. While a multilateral treaty exists for the protection of refugees ( The Convention relating to Status of Refugees, 1951 and its 1967 Protocol) alongwith the mandate of a specialized international institution (United Nations High Commission for Refugees (UNHCR)), the status of IDPs remains in a flux.

India has been home to thousands of internally displaced people. From Kashmiri Pandits in 1990s to Muzzaffarnagar riot victims in 2014, India as a country has seen a steep escalation in the internal movement. However, it remains one of the countries which haven’t recognised Guiding Principles of Internal Development (GPID), the prime international framework available for protection of IDPs because of the reason that it came into existence without any intergovernmental negotiations when more than 17 countries in the world have domesticated the principles into its municipal law. As a result India plays within the vacuum and considers itself bereft of any obligation under law when both international and domestic legal framework mandates protection to be awarded to the IDPs.

The definition of IDPs which exist in International Law was provided by Mr. Deng, the 1998 human rights special representative of the Secretary-General while he drafted the GPID (known as Deng Principles popularly).

“persons or groups of persons who have been forced or obliged to flee or to leave their homes or places of habitual residence, in particular as a result of or in order to avoid the effects of armed conflict, situations of generalized violence, violations of human rights or natural or human-made disasters, and who have not crossed an internationally recognized State border”

It is important to note that the movement of people has to be against their will and should be well within the territory of their country in order to be classified as an IDPs. Moreover, the movement is not just limited to the action/inaction of a state and its agencies, but even international organizations and corporations can induce displacement.

Also, the list of factors causing internal displacement isn’t exhaustive and other reasons can be accommodated. Displacement due to developmental projects is one of the examples which are wide spread and hasn’t been recognized perse in GPID. [It has been recognized in Kampala Convention, the IDP legal framework of African Union]

Despite the fact that definition of IDPs in the GPID is non – legal in nature, the Guiding Principles have gained international standing and authority.

The Guiding Principles provides for thirty principles which shall be observed by all authorities, groups and persons irrespective of their legal status and applied without any adverse distinction.

The following principles ensure to prevent the causes of displacement -

IHL protects IDPs and prevent displacement through Geneva Convention IV and its Additional Protocol I and II (AP 1 & II) as well as via customary international law.

Article 49 prohibits individual or mass forcible transfer as well as deportations of civilians regardless of the motive except when the same is done for the security of population or when there is an imperative military necessity. Article 51(7) prohibits parties to conflict from directing movement of an entire population or an individual in order to shield military objectives and evacuation of children (Art. 78(1)). Willful transfer or deportation within or outside its territory is considered as a grave breach of the Protocol (Art. 85(4)(a)). Further, AP II prohibits forced movements of civilians because of the reason of the conflict and provides for specific provision against the transfer of children (Art. 17). Though the IDPs do not come within the meaning of ‘protected persons’, they are entitled to basic guarantees as provided for individuals to be treated humanely in all circumstances.

IDPs can seek protection under Human Rights Law via The Universal Declaration of Human Rights (UDHR), the International Covenant on Civil and Political Rights (ICCPR) and the International Covenant on Economic, Social and Cultural Rights (ICESCR). Other international human rights treaties relevant to IDP protection and assistance include the Convention on Elimination of Discrimination against Women (CEDAW) and the UN Convention on the Rights of the Child (UNCRC).

Infact, The Statute of the International Criminal Court (ICC) includes among its definition of crimes against humanity and war crime "deportation or forcible transfer of population. (Article 8(2)(b)(viii) and Article 7(1)(d)). The expression ‘displacement of a civilian population’ in the Rome Statute appears to cover transfer both within and beyond a border

As per the recent report by The Internal Displacement Monitoring Centre (IDMC) and the Norwegian Refugee Council, there are over 2.4 million IDPs in 2016 due to conflict, violence and disasters. Despite this fact, India has expressed fear that such intervention would result in violation of state sovereignty and that ‘humanitarian aid’ would become a justification for the interference of powerful states in the affairs of weaker states.

Therefore, incorporation of GPID into domestic law has been limited while 17 countries have adopted GPID in its municipal law.

In 2005, Communal Violence (Prevention, Control and Rehabilitation of Victims) Bill was proposed and drafted in the backdrop the Godhra and Bhagalpur Riot146 , with a purpose to

“…to take effective measures to provide for the prevention and control of communal violence and to rehabilitate the victims of such violence…”.

The bill provided for the rehabilitation of the people affected by the communal violence and compensation by the State. However, the Bill was centre of many controversies and was withdrawn eventually in 2014.

The primary responsibility to award protection and humanitarian assistance to IDPs rests with the State because IDPs are people who haven’t crossed the national boundaries and are well within the country in itself calls for protection within India’s national laws as well as its international obligations w.r.t. human rights regime.

Union of India has by and large only recognised the movement of Kashmiri Pandits (KPs) from the valley in early 1990s as displacement. Though KPs are still considered as ‘migrants’ instead of IDPs by the Govt. fearing the humongous responsibility which will dawn upon them. Also, India frequently denies international humanitarian actors’ access to internally displaced populations, arguing that local governments take full care of the affected people.

The rights guaranteed by GPID are synonymous to rights enshrined in the mentioned international covenants which have been ratified by India and thus attracting obligations towards it. The doctrine of pacta sunt servanda mandates India that every treaty in force is binding upon it and must be performed in good faith and it may not invoke the provisions of its internal law as a justification for its failure to perform a treaty. Further, Article 18, VCLT places an obligation on the States to not indulge in any act which would defeat the object and purpose of that treaty which it has signed or ratified.

On the other hand, Constitution of India remains the charter which primarily protects and assists IDPs since they haven’t crossed the national borders. IDPs are also governed by the Protection of Human Rights Act, 1993 which provides citizens to seek enforcement of their human rights which are either guaranteed by Constitution or international covenants. The principles of GPID are synonymous to the fundamental rights guaranteed under the Part. III of the Constitution and hence, the same cannot be overlooked.

Fundamental rights extend to IDPs irrespective of their movement from their homes or habitual place of residence. Therefore, they shall be treated equally (Art.14) without any discrimination (Art. 15)  on the grounds of religion, race, caste, sex, place of birth. They shall be provided with equal opportunity in public employment (Art. 16) and shall have freedom of speech and expression alongwith the right to assemble, form associations and to move freely within territory of India and practice their profession (Art. 19). Further, Article 39 directs the state to secure its citizens with right to an adequate means of livelihood and Article 41 rests obligation on the state to make effective provision to secure the right to work, education and to public assistance. Therefore, IDPs can approach SC or HC under Art. 32 or Art. 226 of the Constitution to seek redressal of the infringement of their fundamental rights.

Despite the presence of evidence of the movement of the people, government remains oblivious to their existence and continues to be in denial of their status. The long held stand of India has been to associate IDPs with migrants to dilute its responsibility to award them protection as mandated by international standards.

The lackadaisical attitude of the Indian government to not have a domestic legislation catering to IDPs is an extension to their stand against recognising Guiding Principles under the veil of ‘sovereignty’ and principle of ‘non-interference’. International human rights instruments and the provisions of its own Constitution provides India with the mandate to safeguard the rights of IDPs and it shall be failing in its duty by not paying heed to the plight of its own citizens whose status has remain unchanged. Therefore, there is a dire need to acknowledge and protect the rights of IDPs by bringing out a separate legislation and if the government of the day lacks political will for the same, the onus shall shift to Indian Judiciary to interpret the Constitution and International Law in the favour of IDPs.

[The opinions expressed in this article are the personal opinions of the author. The facts and opinions appearing in the article do not reflect the views of LiveLaw and LiveLaw does not assume any responsibility or liability for the same]
TagsArticle 49 Human Rights Law Internally Displaced Persons International Humanitarian Law (IHL) Kashmiri Pandits Rohingya Muslims United Nations High Commission for Refugees
Next Story
Similar Posts
+ View more
Law Firms
+ More