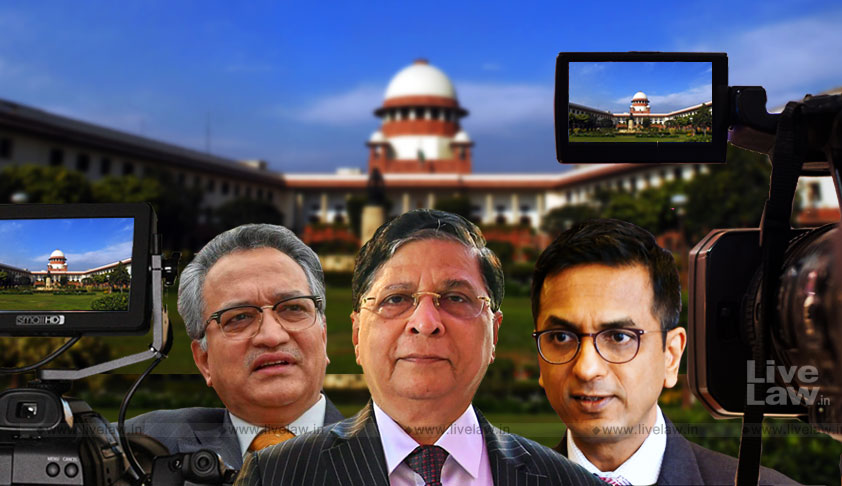 Providing “virtual access to courtroom proceedings as they unfold”, the Supreme Court on Wednesday opened its doors for live streaming of cases of constitutional and national importance, barring those involving juveniles, cases of sexual assault, matrimonial issues, being argued for final hearing before the Constitution Bench.The court also ordered that to give full effect to the process...

Providing “virtual access to courtroom proceedings as they unfold”, the Supreme Court on Wednesday opened its doors for live streaming of cases of constitutional and national importance, barring those involving juveniles, cases of sexual assault, matrimonial issues, being argued for final hearing before the Constitution Bench.

The live streaming would be with prior consent of all parties concerned and if there is no unanimity, the court concerned will take the decision which shall not be open to appeal.

The court will have copyright over the broadcasted content.

There will also be reasonable time gap between the proceedings and streaming to ensure that anything which ought not be made public can be edited.

In allowing live streaming of cases, Justice Chandrachud said, “Sunlight is the best disinfectant. Live-streaming as an extension of the principle of open courts will ensure that the interface between a court hearing with virtual reality will result in the dissemination of information in the widest possible sense, imparting transparency and accountability to the judicial process.”

In its judgment, the bench of CJI and Justice Khanwilkar said, “The project of live streaming of the court proceedings of the Supreme Court on the “internet” and/or on radio and TV through live audio-visual broadcasting/telecasting universally by an official agency, such as Doordarshan, having exclusive telecasting rights and/or official website/mobile application of the Court, must be implemented in a progressive, structured and phased manner, with certain safeguards to ensure that the purpose of live streaming of proceedings is achieved holistically and that it does not interfere with the administration of justice or the dignity and majesty of the Court hearing the matter and/or impinge upon any rights of the litigants or witnesses.”

The bench reiterated that the Supreme Court Rules, 2013 will have to be suitably amended to provide for the regulatory framework for holistic live streaming.

The basic issues which the bench said should be kept in mind are:

(A) To begin with, only a specified category of cases or cases of constitutional and national importance being argued for final hearing before the Constitution Bench be live streamed as a pilot project. For that, permission of the concerned Court will have to be sought in writing, in advance, in conformity with the prescribed procedure.

(B) Prior consent of all the parties to the concerned proceedings must be insisted upon and if there is no unanimity between them, the concerned Court can take the appropriate decision in the matter for live streaming of the court proceedings of that case, after having due regard to the relevancy of the objections raised by the concerned party. The discretion exercised by the Court shall be treated as final. It must be non-justiciable and non-appealable.

(C) The concerned court would retain its power to revoke the permission at any stage of the proceedings suo motu or on an application filed by any party to the proceeding or otherwise, in that regard, if the situation so warrants, keeping in mind that the cause of administration of justice should not suffer in any manner.

(D) The discretion of the Court to grant or refuse to grant such permission will be, inter alia, guided by the following considerations:

(E) There must be a reasonable time-delay (say ten minutes) between the live court proceedings and the broadcast, in order to ensure that any information which ought not to be shown, as directed by the Court, can be edited from being broadcast.

Justice Khanwilkar wrote, “Until a full-fledged module and mechanism for live streaming of the court proceedings of the Supreme Court over the “internet” is evolved, it would be open to explore the possibility of implementation of Phase-I of live streaming in designated areas within the confines of this Court via “intranet” by use of allocated passwords, as a pilot project.”

The designated areas may include:

(A) Dedicated media room which could be accessible to the litigants, advocates, clerks and interns. Special provisions must be made to accommodate differently abled people;

The bench of the CJI and Justice Khanwilkar also listed other measures to be taken for efficient management of the entire project such as:

(A) Appoint a technical committee comprising the Registrar (IT), video recording expert(s) and any other members as may be required, to develop technical guidelines for video recording and broadcasting court proceedings, including the specific procedure to be followed and the equipment to be used in that regard.

(B) Specialist video operator(s) be appointed to handle the live broadcast, who will work under the directions of the concerned Court. The coverage itself will be coordinated and supervised by a Court-appointed officer.

(C) The focus of the cameras in the courtroom will be directed only towards two sets of people:

(D) Subject to any alteration of camera angles for the purpose of avoiding broadcast of any of the aforestated papers, notes, reference materials, books and/or discussions, the camera angles will remain fixed over the course of the broadcast.

(E) This Court shall introduce a case management system to ensure inter alia that advocates are allotted and adhere to a fixed time limit while arguing their matter to be live-streamed.

(F) This Court must retain copyright over the broadcasted material and have the final say in respect of use of the coverage material.

(G) Reproduction, re-broadcasting, transmission, publication, re-publication, copying, storage and/or modification of any part(s) of the original broadcast of Court proceedings, in any form, physical, digital or otherwise, must be prohibited. Any person engaging in such act(s) can be proceeded under, but not limited to, the Indian Copyright Act, 1957, the Indian Penal Code, 1860, the Information Technology Act, 2000 and the Contempt of Courts Act, 1971.

“Sunlight is the best disinfectant”—Here is what Justice Chandrachud said:

Making a statement when he said “sunlight is the best disinfectant” and how live streaming will ensure transparency, Justice Chandrachud also referred to e-committee reports and platforms created for service delivery such as mobile-app, SMS Push, SMS Pull, Automated e-mails and said, “The time has come for this Court to take a step further in adopting technology and to enable live-streaming of its proceedings. Live-streaming of courtroom proceedings is an extension of the principle of open courts”.

The court examined the practices followed by the jurisdictions such as Canada, Brazil, Australia etc and said, “…Every jurisdiction has a set of limitations to which the broadcast is subject. Broadcast is usually not permitted when it impedes the administration of justice.”

Justice Chandrachud suggested that initially, a pilot project may be conducted for about three months, by live-streaming only cases of national and constitutional importance in the Chief Justice’s Court and as and when the infrastructure is ready, the Court can expand the ambit of live-streaming to cover all cases (except for the ones which are excluded like matrimonial cases and cases of sexual assault).

While espousing the principle of open court, Justice Chandrachud said, “The need for live-streaming of proceedings applies with equal and, in some respects, greater force to proceedings of cases in the district judiciary and the High Courts.

Justice Chandrachud said, “…the Chief Justices of the High Courts should be commended to consider the adoption of live-streaming both in the High Courts and in the district judiciaries in phases, commensurate with available resources and technical support. The High Courts would have to determine the modalities for doing so by framing appropriate rules.”

Justice Chandrachud said live streaming would require attitudinal changes in those familiar with the cocoon of a physical court room.

“Live-streaming of proceedings is crucial to the dissemination of knowledge about judicial proceedings and granting full access to justice to the litigant. Access to justice can never be complete without the litigant being able to see, hear and understand the course of proceedings first hand. Apart from this, live-streaming is an important facet of a responsive judiciary which accepts and acknowledges that it is accountable to the concerns of those who seek justice.

“For lawyers and judges familiar with the cocoon of a physical court room, live-streaming would require attitudinal changes. They include the maintenance of order and sequencing of oral arguments. Judges in charge of their courts would have to devote attention to case management. But these demands are necessary incidents of the challenges of our time. Slow as we have been to adapt to the complexities of our age, it is nonetheless necessary for the judiciary to move apace with technology”.

Below are the model guidelines for broadcasting of the proceedings and other judicial events of the Supreme Court of India as penned by Justice Chandrachud.

Kind of matters to be live-streamed

Proceedings involving the hearing of cases before the Supreme Court shall be live-streamed in the manner provided below:

a) Cases falling under the following categories shall be excluded as a class from live-streaming:

(i) Matrimonial matters, including transfer petitions;

(ii) Cases involving sensitive issues as in the nature of sexual assault; and

(iii) Matters where children and juveniles are involved, like POCSO cases.

b) Apart from the general prohibition on streaming cases falling in the above categories, the presiding judge of each courtroom shall have the discretion to disallow live-streaming for specific cases where, in his/her opinion, publicity would prejudice the interests of justice. This may be intimated by the presiding judge in advance or live-streaming may be suspended as and when a matter is being heard; and

c) Where objections are filed by a litigant against live-streaming of a case on grounds of privacy, confidentiality, or the administration of justice, the final authority on live-streaming the case shall lie with the presiding judge.

2. In addition to live-streaming of courtroom proceedings, the following events may also be live-streamed in future subject to the provisions of the Rules:


a) Discussions among the judges on the Bench;

b) Any judge giving instructions to the administrative staff of the courtroom;

d) Notes taken down by the judge during the court proceedings; and

e) Notes made by an advocate either on paper or in electronic form for assistance while making submissions to the court.

The Registry will make one or more rooms or a hall available within the premises of the Supreme Court for the purpose of broadcasting the proceedings. Multiple screens along with the other necessary infrastructural facilities shall be installed, for enabling litigants, journalists, interns, visitors and lawyers to view the courtroom proceedings in the broadcast room(s). Special arrangements will be made for the differently-abled.