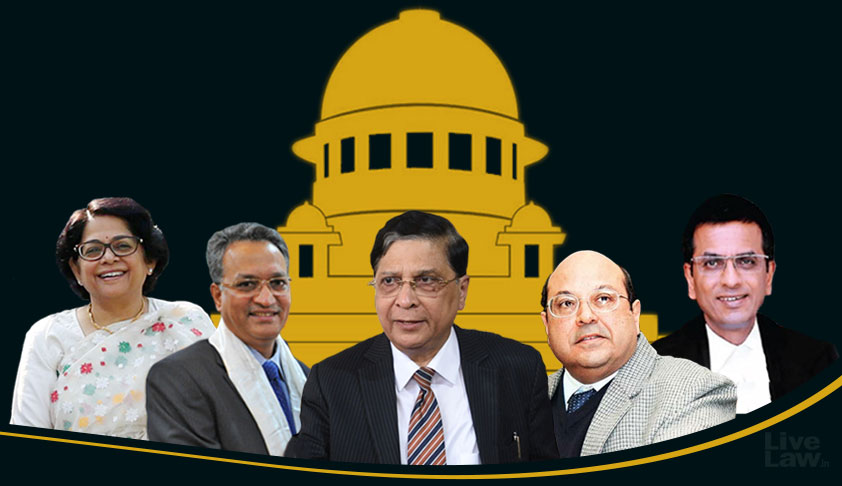 After reserving its judgment in the Sabarimala Temple entry case, the Supreme Court five judge bench on Wednesday commenced hearing in the PIL seeking decriminalisation of the act of Adultery.Praying that section 497 of the IPC and section 198(2) of the Cr. P. C. be struck down altogether, the petition questions the statutory immunity from prosecution for the offence of adultery which has...

After reserving its judgment in the Sabarimala Temple entry case, the Supreme Court five judge bench on Wednesday commenced hearing in the PIL seeking decriminalisation of the act of Adultery.

Praying that section 497 of the IPC and section 198(2) of the Cr. P. C. be struck down altogether, the petition questions the statutory immunity from prosecution for the offence of adultery which has been accorded to women, even as an abettor, under the garb of Article 15(3) of the Constitution.

In the brief hearing on Wednesday, the bench observed that if section 497 fails the test of Article 14, it would be declared unconstitutional.

The rationale for criminalising consensual sex between two adults was also doubted, considering that adultery is already prescribed as a ground for divorce in most personal laws, in addition to other civil law remedies.

When the petition had first come up for hearing in December last year, Advocate Kaleeswaram Raj, appearing on behalf of the petitioner, had contended that the judgement of the five-judge bench in Yusuf Abdul Aziz [AIR 1954 SC 321] may not be deemed fit, in so far as the top court has ruled there under, “Sex is a sound classification and although there can be no discriminate in general on that ground, the Constitution itself provides for special provisions in the case of women and children. Article 14 and 15 read together validate the impugned clause in section 497 of the Indian Penal Code, exempting the woman from prosecution even as an abettor”.

Mr. Raj had also submitted that the judgement in the Sowmithri Vishnu case [AIR 1985 SC 1618], wherein the top court had held, “We cannot accept that in defining the offence of adultery so as to restrict the class of offenders to men, any constitutional provision is infringed. It is commonly accepted that it is the manwho isthe seducer and not the woman”, was not acceptable.

Finally, the ratio of the top court in V. Revathi v. UOI & Ors., [(1988) 2 SCC 72] was also contended as being unacceptable, in so far as it upholds the constitutional validity of the impugned provision which disables the wife from prosecuting the husband for adultery, observing, “Be it realised that Section 497 of the Indian Penal Code is so designed that a husband cannot prosecute the wife for defiling the sanctity of the matrimonial tie by committing adultery. Thus the law permits neither the husband of the offending wife to prosecute his wife nor does the law permit the wife to prosecute the offending husband for being disloyal to her. Thus both the husband and the wife are disabled from striking each other with the weapon of criminal law”.

The Counsel had relied on the judgement in W. Kalyani v. State [(2012) 1 SCC 358], wherein it was observed that the provisions of section 497 of IPC have come under criticism from various quarters for gender bias in so far as it provides that only a man be prosecuted for the offence of adultery and even an adult woman shall be exempted.

Subsequently, on January 5, the three-judge bench headed by Chief Justice Dipak Misra had referred the vires of section 497 to a constitution bench- “...the provision seems quite archaic and especially, when there is a societal progress. Thus analyzed, we think it appropriate that the earlier judgments required to be reconsidered regard being had to to the social progression, perceptual shift, gender equality and gender sensitivity. That apart, there has to be a different kind of focus on the affirmative right conferred on women under Article 15 of the Constitution...”

Centre had sought dismissal of the petition challenging the vires of Section 497 of the Indian Penal Code, informing the Supreme Court that the issue is already being deliberated upon by the Law Commission of India.

The Centre’s affidavit begins with it demanding the dismissal of the petition, and asserting that Section 497 “supports, safeguards and protects the institution of marriage”. It submits, “It is submitted that striking down section 497 of IPC and Section 198(2) Cr.P.C. will prove to be detrimental to the intrinsic Indian ethos which gives paramount importance to the institution and sanctity of marriage.

"The provisions of law under challenge in the present writ have been specifically created by the legislature in its wisdom, to protect and safeguard the sanctity of marriage, keeping in mind the unique structure and culture of the Indian society.”  states the Affidavit.