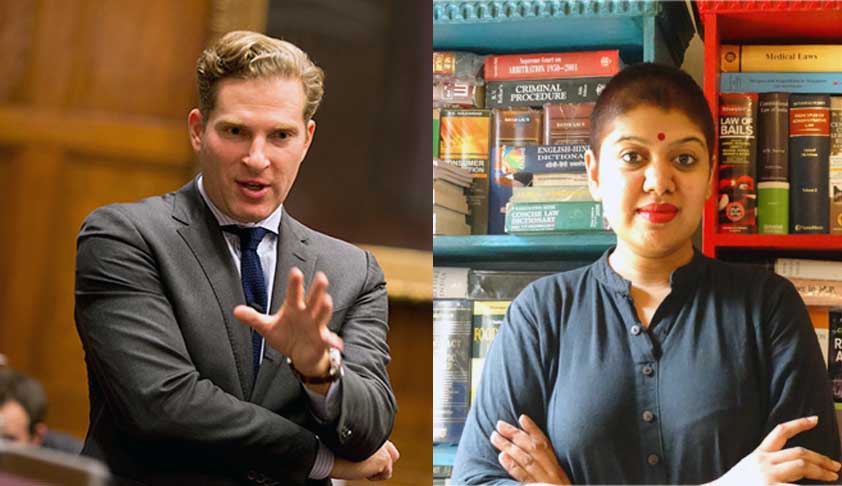 The Supreme Court of India (SC), in one of its latest judgments -Abhiram Singh vs. CD Commachen (delivered on 2nd Jan 2017), ruled that a political candidate or anyone with his/her consent, cannot appeal to the candidate’s, his agent’s, or voters’ – religion, race, caste, community or language during elections. Both the positive element viz. an appeal to vote on these grounds, and the negative element viz. an appeal not to vote on these grounds are covered. In essence, the SC provided that in light of the secular nature of the Indian constitution, political candidates cannot be allowed to appeal to religion, caste etc. for creating divisive tendencies in the society. Delivered by a 4:3 majority, the judgment gave rise to a difference of opinion, both inside and outside the court room.Like in case of any judgment, the differences in opinion is only fair, but in a recent article in Bloomberg, Professor Noah Feldman of the Harvard Law School has said that this judgment ‘disadvantages only minority religions’. This piece points out that arriving at such a conclusion based on the reasoning offered is incorrect and a misreading of the Indian law.

The legal issue before the court involved the legal interpretation of Section 123 (3) of the Representation of People’s Act, 1951 (an act to regulate elections in India), which lays down what will be a ‘corrupt practice’ for the purpose of this Act :

“123 (3) The appeal by a candidate or his agent or by any other person with the consent of a candidate or his election agent to vote or refrain from voting for any person on the ground of his religion, race, caste, community or language or the use of, or appeal to, religious symbols or the use of, or appeal to, national symbols, such as the national flag or the national emblem, for the furtherance of the prospects of the election of that candidate or for prejudicially affecting the election of any candidate….”[Emphasis supplied].

The legal issue in the judgment hinged upon whether the word ‘his’ refers only to candidate’s religion or also includes the religion of the agent and the voters. The majority opinion, delivered by the outgoing Chief Justice – Justice TS Thakur favoured a broad interpretation and held that -

“The sum total of Section 123 (3) even after amendment is that an appeal in the name of religion, race, caste, community or language is forbidden even when the appeal may not be in the name of the religion, race, caste, community or language of the candidate for whom it has been made.” (p 60-61 of the judgment)[Emphasis supplied]

It may be useful to look at Section 123 (3A) too, because the judgments in question do make a reference to it at various points, even though the main issue involved the interpretation of Section 123 (3) alone.

Prof. Feldman in his Article makes the claim that the judgment in Abhiram Singh

‘delivered a gift to the ruling Hindu nationalist Bharatiya Janata Party at the expense of India's minority faiths and castes.’ The reasoning he offers for this is by reliance on another earlier judgment by the Indian Supreme Court viz. Ramesh Yeshwant Prabhoo v. Prabhakar Kashinath Kunte and Ors. (1995) wherein the Court said that Hinduism is ‘a way of life and nothing more’. This leads Prof. Feldman to say that by virtue of the latest judgment, ‘Muslim candidates can't invoke their creed to win votes, but Hindu candidates can.’ This opinion was also re-iterated in another piece published in NY Times.

This claim is simply not true for the following reasons. First, even though the Supreme Court went on to deliberate the meaning of ‘Hindutva’ and ‘Hinduism’ in the Ramesh Prabhoo judgment, it held the speeches of a Hindu candidate to amount to ‘corrupt practice’ (Page 34 of the judgment). The Court said that the case involved a clear appeal to Hindu voters on the basis that the candidate (Ramesh Prabhoo) was a Hindu (Page 33 of the judgment). Further, the speech made derogatory reference to Muslims and amounted to ‘promote(ing) feelings of enmity or hatred between that Hindus and the Muslims on the ground of religion.’ (ibid).The speeches were made by Shiv Sena chief Bal Thackeray, with the consent of Ramesh Prabhoo.Shiv Sena is a far right political party in the state of Maharashtra in India. Mr. Thackeray in his three different political speeches made comments such as :

"We are fighting this election for the protection of Hinduism. Therefore, we do not care for the votes of the Muslims. This country belongs to Hindus and will remain so." (Page 3 of the judgment)

“Hinduism will triumph in this election and we must become hon’ble recipients of this victory to ward off the danger on Hinduism, elect Ramesh Prabhoo to join with Chhagan Bhujbal who is already there. You will find Hindu temples underneath if all the mosques are dug out. Anybody who stands against the Hindus should be showed or worshipped with shoes. A candidate by name Prabhoo should be led to victory in the name of religion." (Page 4 of the judgment)

The Supreme Court held that the speeches amount tocorrupt practices and said that it ‘cannot help recording our distress at this kind ofspeeches given by a top leader of a political party’ (Page 34 of the judgment). So, in this very case, the speeches made by a Hindu candidate were held to be ‘corrupt practice.’ To that extent, relying on this judgment to suggest that the latest ruling will not be applicable to Hindus is incorrect. It is important to note what the Court said while looking into the meaning of ‘Hindutva’ and ‘Hinduism’. It said –

“It is the kind of use made of these words and the meaning sought to be conveyed in the speech with has to be seen and unless such a construction leads to the conclusion that these words were used to appeal for votes for a Hindu candidate on the ground that he is a Hindu or not to vote for a candidate because he is not a Hindu, the mere fact that these words are used in the speech would not bring it within the prohibition of sub-section (3) or (3A) of Section 123.”(Page 28 of the judgment)

Therefore this holding of the Court cannot be said to lead to a conclusion that the political candidates from BJP or any other Hindu candidate for that matter will be out of the scope of the judgment in Abhiram Singh. In Ramesh Prabhoo, the court elaborated on the use of the words – Hinduism and Hindutva but said that whether their usage in a speech is hit by Section 123 (3) will have to be decided on the facts of the case. This judgment in Ramesh Prabhoo cannot be interpreted to mean that the mere use of the word – ‘Muslim’ irrespective of the context and facts of the case will be hit by Section 123 (3), whereas usage of the word ‘Hindu’ will not. There is nothing to support this conclusion.

The judgment in Abhiram Singh does not touch upon the issue of Hinduism or Hindutva. It has only widened the scope of the Section 123 (3) as it is no longer restricted to the religion of the candidate alone, as held in the Ramesh Prabhoo judgment. So now instead of the candidate’s religion, even the candidate’s agent’s and the voters religion cannot be appealed to. Therefore, the question of discriminationamongst Hindus and Muslims does not arise. Neither Hindu, nor Muslims, nor people of other religion can make an appeal on ground of religion.

If Prof. Feldman’s argument is read as a case for discrimination based on the fact that Muslims being in minority will be dis-advantaged if they are not allowed to bring up religion related issues in elections, then consider this. Given the huge margin by which the ruling party BJP has won in the 2014 elections, if anything, this judgment can be seen as a way to check on BJP to use its power blatantly in appealing on grounds of religion in the upcoming elections.

Secondly, the extent to which identity based mobilization is permitted, can be known only by future application of the judgment. This is primarily because the judgment does not clarify with any definitiveness whether ‘identity-based mobilization would be in violation of the judgment.’Making a statement that Muslims are in minority in the country and their economic and educational standards need to be improved, may not be hit by Section 123 (3) of the Representation of People Act, but saying that Muslims are still backward and you should vote for me because being a Muslim I will protect your rights, may be hit by this section. The judges will decide whether a particular political speech is hit by Section 123 (3) based on the facts of the case. It cannot be concluded that absolutely all identity-based mobilization, irrespective of the framing of the language of the political speech will be in violation of Section 123 (3) and Section 123 (3A), as that would be a very broad reading of the judgment.Further, as noted by Justice Chandrachud in his dissent, strict standard of proof will apply when scrutinizing the facts under Section 123 (3). This is important because the consequences of a corrupt practice are serious, as the person in question may be debarred from voting and contesting elections for upto six years.

The question of a potential conflict between Section 123 (3) of the Representation of People’s Act and Art. 19 (1) (a) of the Indian Constitution (which protects freedom of speech and expression as a fundamental right), was raised in the Abhiram Singh case. The Court noted that ‘no serious submissions were made in this regard.’ Further, the Court referred to its earlier judgment in Jamuna Prasad Lakhariya and Others v. Lacchi Ram and Others (1955), (which was also cited in the Ramesh Prabhoo case), to show that this question has been considered and decided upon by the Court in the negative. A democracy is not about unrestricted freedom to discuss anything and does not protect speech that violates the basic structure. The secular nature of the Indian polity is part of the basic structure and a restriction to appeal to religion under Section 123 (3) protects the secular fabric of the country.

The bottom-line of the judgment in Abhiram Singh is that religion, race, caste, community or language should not be used as the sole reason to appeal for votes. It is a fact that the religious or caste identity of the candidates is not hidden from the voters, and will be continued to be relied upon in one way or the other. It is also true that the India legal system provides for reservation (in the American context – affirmative action), thereby recognizing the differences in religion, caste, gender etc. However, the Court seems to have been concerned with the ground reality in India wherein these differences are exploited by political parties, especially during elections,thereby exacerbating the tensions on these lines, in the society.

By giving a broad interpretation to Section 123 (3), the Indian SC has championed the cause of preserving the democracy and struck at the root of the divisiveness that mixing religion with politics can cause. In doing so, it hasn’t given any indication that any political candidates of any one religion will be given preference over the other. Therefore criticizing the judgment on this ground is a misreading of the law.

Avani Bansal is a Lawyer practising in the Supreme Court of India. She had her BCL from Oxford,  LLM from Harvard