My Innings in Justice: An Interactive Session with Justice Mukul Mudgal [Video] 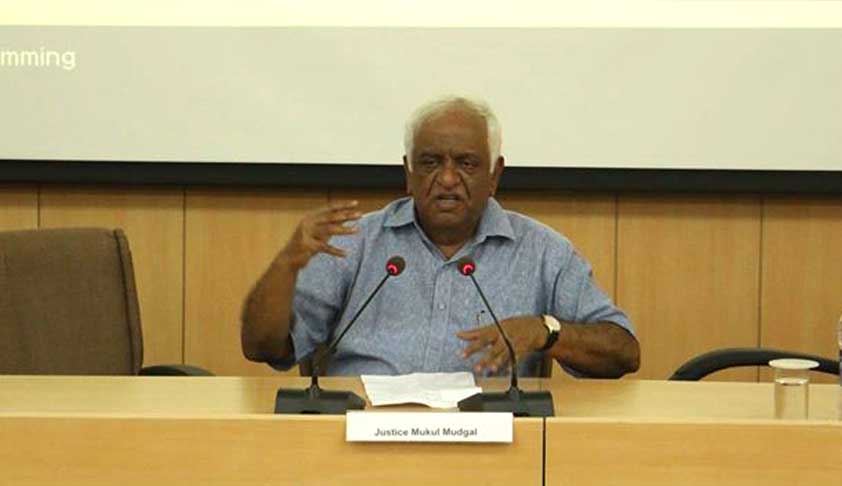 Nyaya Forum for Courtroom Lawyering hosted Justice Mukul Mudgal on 6th March, 2017 at NALSAR University of Law._h9-FriVhsJustice Mukul Mudgal, a former Chief Justice of the Punjab and Haryana High Court, an d a former Judge, Delhi High Court,has also been a member of NALSA (National Legal Authority of India) and the Court of Arbitration for Sports (CAS), Geneva. He headed a committee appointed...

Justice Mukul Mudgal, a former Chief Justice of the Punjab and Haryana High Court, an d a former Judge, Delhi High Court,has also been a member of NALSA (National Legal Authority of India) and the Court of Arbitration for Sports (CAS), Geneva. He headed a committee appointed by the SC to probe the allegations of betting and match-fixing in the Indian Premier League in 2013. He was also appointed by FIFA as the Deputy Chairman of its Governance Committee, and is currently serving there. Justice Mudgal visited NALSAR on 6th March, 2017 to give a lecture on his experience inlitigation and the judicial system in India and about sports law. He shared his insights in to the profession given his experience as a lawyer for 25 years, and gave advice to those who wanted to join the bar.

Justice Mudgal started his speech by giving a general set of rules which a young advocate should keep in mind while drafting. Firstly, he says that a filing of briefs should be made in a brief concise manner, with all the important provisions clearly stated. The lawyer should always write down the relevant section in the filing, as it becomes convenient for the judge. And if it is an appeal, the most glaring problem with the judgment should be clearly written down. Secondly, that one should always make a list of the cases in the beginning with a synopsis. He also advises against using too many cases, instead that using phrases like ‘and the same has been held in other judgments also’ would suffice.Thirdly, for a junior, they should always be prepared with the briefs which their senior has, as there is a possibility that the judge may ask them to present the arguments in the seniors’ absence. Fourthly, knowing the judge is an extremely important skill for an advocate. The advocate should know the judge’s mentality, their interests, their disinterests, likes and most importantly their dislikes. In his own words, “A judge may be an ass, but he will decide your case.” Judges are also human beings who have days when they can be very irritable, a lawyer has to learn to handle such situations deftly. In a question about what is his advice would be for interns, he says that an intern should attend every single meeting his senior has. There may be times when a client, who is overawed by the senior, will not share something with him/her, but may share the information with the intern.

According to Justice Mudgal, there are certain prime qualities which make a good litigant. An advocate should be sharp and observant, and have the ability to know the intentions and thoughts by looking at people’s body language. To develop this skill he suggests that they read a book by Desmond Morris called ‘Manwatching’. After finishing the oral arguments of a case, they should always give the printed copy of your submission as the judge’s may not always remember the contents of your speech. He continued to say that it is very important to develop a reputation of credibility with the bar and the bench. This is because judges also gossip and talk about the lawyers, and if a bad impression is created in front of one judge then that will spread to the entire court. Justice Mudgal said that a good human being can become a good advocate and to become a good human being it is important to develop interest in arts and literature. According to him, humility is a great virtue, it is important to be modest and humane to everyone, especially to those who are not as well-bestowed as we are.

On sports law, Justice Mudgal says that though there is not much on sports law in India, a sports bill was drafted in 2011 it is still doing the rounds. Some of the provisions in the Bill are, that there should be an age limit for any office bearer in 70 and no individual can stay for more than 3 terms. 25% of the executive committee should be held in national bodies by national level players, in state bodies by state level players and mandatorily one female in the body. He also says that Justice R.M. Lodha committee’s report will have wider consequences for not just the cricketing governance mechanisms as BCCI, in comparison of the others, is the most well-managed sports body in the country. There has also been a call from players from other sports to apply the Lodha Committee recommendations into their sports bodies. In response to a question about Supreme Court’s decision on barring of politicians from becoming a part of the committee, he said that it is unfair to prohibit an entire profession from joining the committee, even if the rationale behind it may have been reasonable- that it would be tough for them to contribute as much time to the body. For those interested in the sports law, he says that they can learn it in the context of media law, contract law, etc.

Justice Mudgal also spoke on the issue of legalisation of betting in sports. He said that this would be give government a chance to make regulations on this and give a chance to prevent the unfair practices in the games, which would be beneficial for the industry.He cites the example of FIFA, where there are computers which track the betting patterns and flag any erratic or unusual bets being placed. The sheer amount of money which gets transacted in this entire betting, can give the government a lot of chance to earn revenue from this. But, he said that legalising betting is a great “moral call” that a government will have to take, which he does not see happening anytime soon.

The talk as diverse as it was in the range of topics it covered, was inspiring and informative. Justice Mudgal gave practical advice and “trade-secrets” of the profession to a young litigant. He gave insights into how young advocates should conduct themselves and grow as an individual in the profession. He gave a concise explanation of the current state of the sports law and also advised on what a student can do if they are interested in the field. He also spoke as to how spot-fixing must be tackled, and how association of sporting disciplines must be more responsive to the needs of their sport. He lamented at the politicisation of sports regulation, and the future prospects on this front. He also addressed questions from students on a plethora of issues such as maintainability of writ jurisdiction (under Article 226 of the Constitution) towards bodies serving “public functions.”

All in all, the primary takeaway from the interactive session was that pursuing a career in courtrooms may be difficult in the formative years, but has a great prospect of returns in the later years; not only in material terms, but also in terms of aspects such as satisfaction happiness. Justice Mudgal recounted his engagement with sports in the law, right from his 1989 litigation challenging the ban on a few cricketers, to his role as a judge, when he delivered the landmark judgment as a single judge sitting over Rahul Mehra And Anr. vs Union of India &Ors.[the link leads to the division bench judgment on the question], and later when, as a former judge, courts and executive authorities have consistently sought his contribution to issues such as doping, spot-fixing, and sports administration.