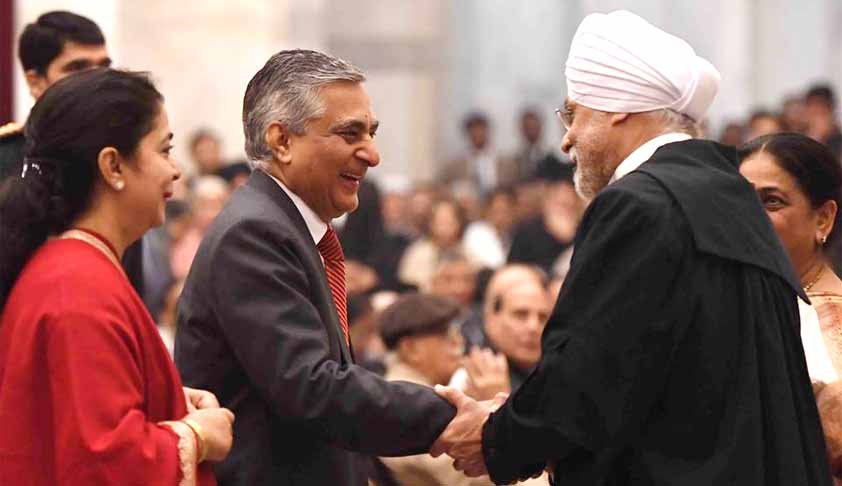 Live Law presents you with some sidelights, a few interesting and witty moments at Chief Justice T S Thakur’s farewell organized by the Supreme Court Bar Association yesterday which was presided over by Chief Justice-designate Justice J S KheharJUSTICE KHEHAR ABOUT JUSTICE THAKUR ( IN LIGHTER VEIN):“SUCH A HANDSOME MAN” : I first set my eyes on Justice Thakur at the High Court of Punjab...

Live Law presents you with some sidelights, a few interesting and witty moments at Chief Justice T S Thakur’s farewell organized by the Supreme Court Bar Association yesterday which was presided over by Chief Justice-designate Justice J S Khehar

“SUCH A HANDSOME MAN” : I first set my eyes on Justice Thakur at the High Court of Punjab and Haryana in 2008. I remember vividly he was dressed in a khadi half kurta..very casually but elegantly dressed …his first glimpse gave me the impression that he is a very handsome man, an extremely handsome man. If he is handsome to a man I was wondering what he would have been to a woman. Well we met and shook hands...it was a firm and warm handshake...Then on the relationship continued...and you know our women lawyers describe him as our handsome and flamboyant Chief Justice”

“WHY CAN’T YOU BE PRESIDENT ? ” : “The other day while we were having a cup of coffee together I told him that I came across a newspaper report that he is going to be the Vice President of India but he laughed it off..But I ask why Vice President why not President ?”

“HE WANTS TO DRIVE TRACTOR THROUGH HIS FARM”: “I asked Justice Thakur what he wanted to do in his spare time post-retirement.  He told me I wanted to drive a tractor through his farm and just be himself. We wish him that”

“HE WANTS TO BE AN ACTOR TOO”: “At a venue during a personal conversation…I cannot share the entire details with you...he shared with me something  ...i said ‘super’..he shared it with few of our other colleagues..they also said ‘super’..Then in a related conversation while a documentary on judiciary was being conceived I asked him why don’t you direct it sir ? He said why direct? Why cannot I act in it..I say may you also act in your spare time”

CJI THAKUR REACTED: “Look at your new Chief Justice. He is now sending me to bollywood and he also says if possible re-emerge in Rashtrapati Bhawan”

THIS CROWD HERE TO WELCOME THE NEW CJI AND NOT FOR ME: CJI THAKUR - Pointing towards the “largest ever crowd” which had gathered at the Supreme Court lawns comprising of judges, law officers, SC officials and lawyers, all speakers said it showed how popular CJI Thakur was. But when his turn came, Justice Thakur said the crowd had gathered to welcome the new Chief Justice J S Khehar and they only wanted to get rid of a “terrible” Chief Justice. This raised a peal of laughter and thunderous applause.

CJI THAKUR BREAKS DOWN AGAIN: Chief Justice T S Thakur became emotional and spoke in a choked voice while remembering his days as lawyer. He urged for an amendment of rules to allow retired Supreme Court judges to practice law.The last time he broke down was on April 25 last year, during the state CJs and CMs conference while launching an unprecedented attack on the government for blaming the judiciary for the backlog of cases, which has hit an alarming 3.14 crore, while “doing nothing to increase the number of judges and courts despite repeated pleas from the judiciary”.

He said yesterday in a choked voice: “The most challenging and most interesting times I had in my life was as a lawyer. If you ask me, this is one amendment that I would like..it is to let the retired Supreme Court judges to start practice again”

IN A LIGHTER VEIN AG ROHATGI CHARGES SCBA SECY GAURAV BHATIA WITH “CONTEMPT”; BHATIA “PLEADS GUILTY”: Bhatia in his speech while praising CJI Thakur called him “the most judicious person around”. AG Rohatgi during his speech said “Be very careful Mr. Bhatia the comments will amount to contempt as there are several other judges and several legal luminaries seated here”

Bhatia replied: “Learned AG says I’m in contempt. I plead guilty to that… But as punishment only request that I get an extra day with CJI Thakur and that is my affection for you, Justice Thakur”.

AG ROHATGI ON HIS ASSOCIATION WITH CJI THAKUR: “My association with Justice Thakur, in fact with his family goes back a long way as a youngster at Bar. I have appeared before his father the illustrious judge late D D Thakur.  I still remember his smiling face. He was very popular with young lawyers because he would often encourage them ..say it doesn’t matter what is the nature of a case..let us go..something or other will come up..I think  Justice Thakur has imbibed those qualities of his father who was a versatile person.

AG ROHATGI RATES CJI THAKUR’S ENTRY TAX VERDICT AS THE BEST: “There were several landmark judgments of Justice Thakur like the curb on use of religion and caste for canvassing votes, the BCCI one..but to my mind the biggest judgment is of the entry tax. It has cleared thousands of cases, not only in the court but in all the High Courts..there was utter confusion till then. Some High Courts had upheld it while some others had struck it down”.