'Criminalization Is Being Presented As A Solution To Social Problems' :Dr Prabha Kotiswaran On Women Issues And Laws 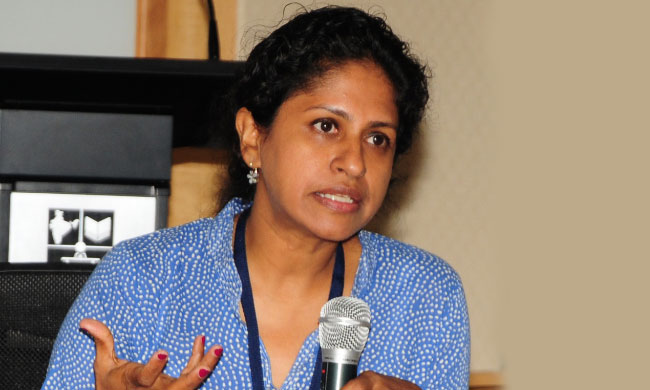 In the recent past, the only response of the Indian government to sexual violence against women and children, has been introducing newer and harsher punshments. This is evident through the Criminal Law Amendment Act, 2013, Criminal Law Amendment Act 2018 and this year's to the Protection of Children from Sexual Offences Act, 2012 (POCSO). In this interview, Dr. Prabha...

In this interview, Dr. Prabha Kotiswaran, speaks to Live Law about the processes and movements leading to these legislative shifts, and the implications that this might have on the ability of women to exercise their rights within the legal system. Dr. Kotiswaran is Professor of Law and Social Justice at King's College London, and has written extensively on issues of feminist legal theory, post-colonial feminist studies and criminal justice. She is in New Delhi this week, and is delivering Project 39A's Annual Lecture in Criminal Law, 2019 on 22nd November 2019 (Friday) at the Siri Fort Auditorium-II at 6:30pm.

What is your take on the amendments to the IPC and POCSO, increasing mandatory minimum punishments for sexual offences against women and children. Do you think the amendments were necessary to ensure protection of these vulnerable groups?

We have enough laws on the books which if implemented in their letter and spirit can counter sexual violence against women and children. Certainty in implementation of the law is the surest way of securing the interests of victims. When laws are not implemented, there is a temptation to resort to more stringent laws that compromise the right to a fair trial and which are implemented even less because it makes judges ambivalent. With POCSO for instance, children's rights groups repeatedly cautioned against the imposition of the death penalty, as victims would be less likely to report crimes given that the majority of the offenders are known to victims, that the death penalty was against international law and practice and that it is used arbitrarily in India. They were clear that the amendment was "anti-child, regressive and counter-intuitive". Judges and senior lawyers agreed. When the implementation of POCSO is highly unsatisfactory how can increasing punishments alone address institutional failures? Despite this the POSCO Amendment Act, 2019 was passed.

After the December 2012 gangrape in Delhi, the government responded by constituting the J.S. Verma Committee and subsequently enacting the Criminal Law Amendment Act, 2013. Similarly, the law was again amended in 2018 following the Kathua incident. What do you make of one-off incidents triggering massive legislative changes? Do you view it as more than mere political tokenism?

There is considerable tokenism in both instances demonstrating that governments, irrespective of their political persusion, find an easy ally in criminalisation. The 2013 amendments were adopted at a rapid pace in response to the groundswell of protests in the wake of Delhi gang-rape and murder. Although the 2018 amendments also seemed to be triggered by the Kathua case, I believe that in the intervening 5 years, the state has developed a highly carceral mindset that we see expressed in other arenas such as trafficking. Indeed as MP Kiron Kher said in the Lok Sabha when the Criminal Law Amendment Bill was being debated, that far from being a "knee jerk reaction and not thought out well," the provisions of this Bill are "undoubtedly well-thought out"; "this government has zero tolerance for these sorts of crimes." We must bear this in mind and locate the carceral move in more than just a tokenist narrative.

In your work on Governance Feminism, you have examined the manner in which the Indian Women's Movement (IWM) engaged with the state apparatus in ensuring changes to and implementation of laws on sexual violence, especially with the Verma Committee. Could you tell us a little about that, and what you feel about the implications of such engagement? Also, how do you think that might be different from how women's groups across the world have interacted with the state on similar issues?

In a 2018 book Governance Feminism: An Introduction, I mapped feminists' efforts to amend rape law from 1979 onward till 2013 to argue that Indian feminism has placed an increased reliance on criminal law, has a deep commitment to a highly gendered reading of sexual violence, and has a diluted oppositional stance vis-à- vis state power. Where they were highly suspicious of state power at the state of the movement, their opposition to the criminal law is today manifest mostly in their arguments against the death penalty. I am not saying that the Criminal Law (Amendment) Act, 2013 is not beneficial at all, only that intended consequences are accompanied by unintended consequences that we need to consider especially carefully. Indian feminists are however not alone in adopting such strategies. Feminists around the world have engaged with the state to pass criminal laws to address sexual abuse but often times, the results have been poor for victims of sexual abuse themselves but the hands of the carceral state have been strengthened in the process.

In relation to sexual violence, the IWM has increasingly relied on criminal law. This is not the case in relation to trafficking and sex work. The IWM has long been conflicted on the question of sex work; they want to support the rights of sex workers but not the right to sex work given the economic conditions in which women take to sex work in India. This meant that they have generally abdicated the advocacy space on this issue which has been in turn occupied by radical feminist and anti-trafficking NGOs. These groups have pursued passage of the Trafficking of Persons (Prevention, Protection and Rehabiltation) Bill, 2018 which is highly carceral legislation that was passed by the Lok Sabha last year but which lapsed before being presented to the Rajya Sabha. Feminists from the Indian women's movement, however, supported sex workers' groups especially when the Verma Committee recommended an offence of trafficking that conflated voluntary sex work with trafficking. The Verma Committee then issued a clarification that the offence of trafficking would not cover voluntary sex work.

Could you give an idea about what to expect in your upcoming lecture, especially with regard to how the criminal law apparatus interacts with social realities ? How do you think this might be relevant for lawyers who practice before Indian courts, and confront multiple issues you will raise, in their everyday practice?

In my lecture I speak about the political economy of criminal law, about why we need to pay closer attention to how laws are made not just how they are implemented; about how we need to have an overarching understanding of how the various criminal laws interact with each other; how we have prioritised passing new laws in place of investing resources in institutional, governance and social reform and how criminalization is being presented as a solution to social problems whereby it displaces other regulatory approaches such as administrative law, labour law and social welfare law. I hope that this will help practising lawyers understand the broader context in which these laws are made and therefore make strategic and ethical choices when they deal with sexual violence cases in securing justice for the victim while ensuring a fair trial for accused persons.