"Law Has Been Very Slow To Take Up Technology": In Conversation With Prof. David Wilkins (Harvard Law School) 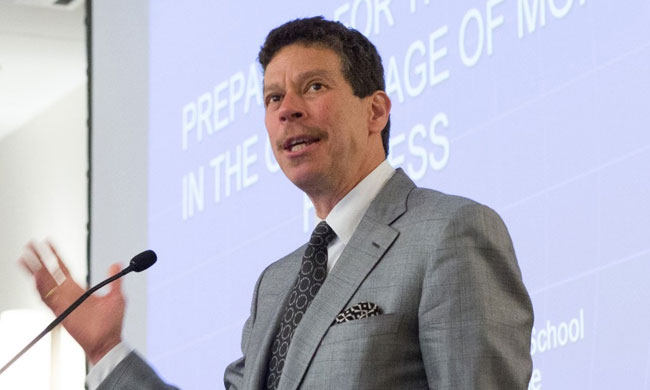 He said that one of the reasons why he was attracted to study in India (working on the project) was that according to him, among the BRIC countries, India has the deepest and strongest commitment to Rule of Law and India is undergoing tremendous transition. Therefore the study of evolution of Rule of Law in a rapidly developing country like India is interesting.

On The Changing Contours Of Rule Of Law In India

Rule of Law is a critical pillar for democracy and development. But its meaning is changing and it is different in different places. Rule of Law is also under threat around the world. However, Professor Wilkins said that he has seen the strength of Rule of law in India and Indians should be very proud of its tradition, strength of legal profession and of judiciary.

On The Challenges To Rule Of Law In The Indian Context

Challenges to Rule of Law come not only from rapid development but also all the other changes in society and in the world. India, like many places of the world is facing the challenge of the assumption of having a uniform Rule of Law on an incredibly diverse population. The challenge is the incredible diversity - in language, religion, culture, ethnicity, regions and stages of economic development - and the idea of a single Rule of Law that can cover this diversity. If there is no way of resolving dispute within a framework of Rule of Law, then that leads to conflict and eventually potential bloodshed. That can destroy every country. That is a challenge for India, as well.

Another aspect of the challenge is that India is taking a legal system that is inherited from the British. The British legal system has much strength; but it doesn't necessarily apply well to the Indian context. And even more, in a context that is evolving with advancement in technology and globalization. Rule of Law has to keep up with the changes.

One of the major challenges is how long it takes for disputes to be resolved in India. This again is not unique to India. Other jurisdictions are also facing this challenge. Various kinds of reforms including introduction and greater use of technology might be able to solve this problem.

Professor Wilkins says that firstly we need to understand what is it that we are trying to accomplish in our judicial system. Next step is to identify what parts can be coordinated and subject to the use of AI/ machine learning and what part need to have the attention of human beings. Next is to understand the relation between these two things. This is not true just for the judiciary, but true for the legal profession also.

Law has been very slow to take up technology, unlike everything else in lives that is run by technology. Professor Wilkins finds a reason for that. He said: "Law is a discipline in some ways that looks forward by looking backward." He stated that law is the only different discipline in which you can't say anything new unless you prove what someone else already said is false and he opined that this is good in a way because the law does not just change because everything else has changed. The change has to be justified in terms of the continuation of the principles that is central to Rule of Law. It is a challenge, again not just in India.

The legal profession needs to be much more willing to experiment with new ways, dealing with challenges, introducing new kinds of technologies and then measuring how it affected us, not against some abstract notion of perfection, but against the reality of what real human beings do. The key lies in figuring out the best way to incorporate the best of the technology that we see around us. "Technology always has to be controlled by human beings and tempered by the important human values that are at stake particularly in a system of justice."

Professor Wilkin asserted that it was already open in many ways that people always just don't acknowledge. He pointed out to the list of who is doing the top deals in India. They are global firms, and what they in fact do is they employ 100 or 200 trained Indian lawyers, who would fly in to Hong Kong and Singapore to do Indian deals representing Indian clients. The idea that we could have a legal system closed in the midst of a global economy is false. There should be reasonable restrictions as to who is able to have licence to practice law, whether they are from India or outside. Every jurisdiction in the world is moving towards openness in the delivery of legal services.

Professor Wilkins said that India produces world-class lawyers. They don't have anything to fear in terms of the quality of Indian lawyering. Indian lawyers and legal profession would benefit from more engagement with the best of the lawyers and best of legal practice around the world. Young Indian lawyers will feel more opportunity and options of working at whatever kinds of organizations that they want and without leaving their country. There has been tremendous brain drain, for whatever reasons, when India needs those talents.

On How A Free Legal Market Would Affect Common People

It is not true that globalization is an unmitigated good for everyone. Yet lives have improved due to the free movement of people, ideas and products across the borders. According to Prof. Wilkins, "When you keep something out, you often exaggerate its importance." So the idea that India if opens its market to foreign lawyers, there would be a flood of lawyers from all over the world, who would instantly be coming in to take over the Indian legal profession, is a fantasy. Countries like Japan, Hong Kong, Singapore and many more have opened their markets; there are more law firms, more foreign lawyers; but they have not taken over space.

He said "It will be a very long time that anyone to argue a case in the Supreme Court is going to go to a lawyer from the US or the UK versus Mr. Fali S. Nariman or Harish Salve because they know the judges and the Indian Supreme Court. In fact they would become more valuable.

On Standard And Quality Of Legal Education In India

Much more need to be done to improve the overall quality of Indian legal education. There have been some pockets of terrific excellence - Jindal law School produce outstanding lawyers and top national law schools produce world-class lawyers, but that is a tiny fraction. There must be even more investment particularly in public colleges and universities by government. The importance of world class legal education for a world-class legal profession is in itself the key to India becoming more and more important on the world stage economically, politically and socially.

Law is a gateway to development. Professor Wilkins was optimistic about India compared to other emerging economies in Asia and South Asia because he thinks that India despite all its flaws is a functioning democracy with a functioning Rule of Law system that has many pockets of excellence. This would be the major reason that it would attract the kind of foreign investment not just in dollars, but also in brainpower cultural and other ideas that will continue to develop the India economy.

There is no magic solution but constant attention needs to be taken by those who care about the Rule of Law and the legal profession to focus on legal education and try to upgrade legal education to higher standards.

"The World Has So Much To Learn From India"

Professor Wilkins quoted with approval, Anand Mahindra: "If India succeeds, the world succeeds", and concluded, "All of the issues that the world is facing around development, around democracy, around dealing with diversity, around understanding how to deal with demographic change is in India. Therefore if India succeeds, all can learn from India."