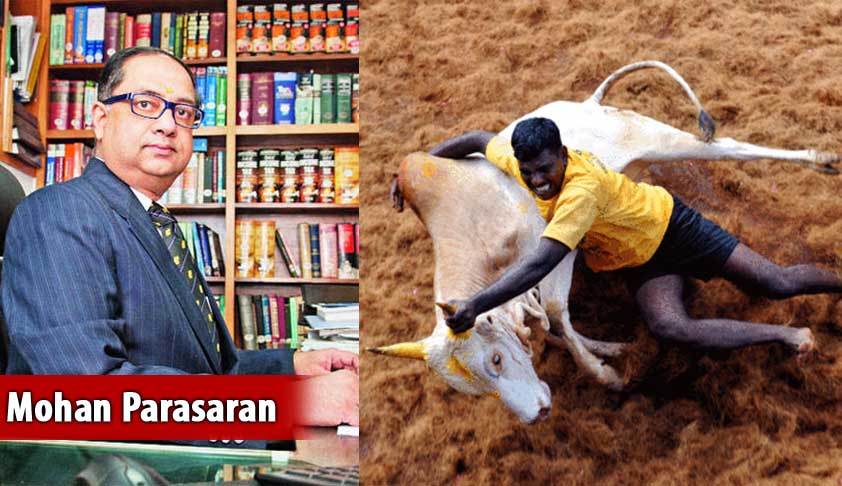 The Constitution Drafting Committee had a difficult task of balancing rights and duties in a multicultural, diverse country like India while framing its Constitution. The fundamental rights of persons or groups of persons have been subjected to reasonable restrictions. While fundamental rights were not specifically extended to animals but in a dignified society bound by constitutional...

The Constitution Drafting Committee had a difficult task of balancing rights and duties in a multicultural, diverse country like India while framing its Constitution. The fundamental rights of persons or groups of persons have been subjected to reasonable restrictions. While fundamental rights were not specifically extended to animals but in a dignified society bound by constitutional values, respect for other living beings is implicit. Whether such respect extends to a fundamental right to life is debatable, nevertheless the law on the subject prohibits certain actions qua animals.

Jallikattu or Sallikattu is a traditional sport, which symbolizes and celebrates the native, indigenous life of the villages of Tamil Nadu. In many districts, the sport is played in celebration of Pongal.

A notification was issued by the Ministry of Environment and Forest on July 11, 2011 banning use of various animals including bulls as performing animals.

The Tamil Nadu Jallikattu Regulation Act of 2009 which regulated the sport of Jallikattu, was struck down by the Supreme Court vide its judgment in Animal Welfare Board Of India Vs A. Nagaraja & Ors pronounced on 07.05.2014, as repugnant to the Prevention of Cruelty to Animals Act and therefore unconstitutional, and condemning the sport of Jallikattu and bullock cart race as violative of Sections 3, 11(1)(a) and 11(1)(m)(ii) of Prevention of Cruelty Act, and the July 11 notification of MOEF was upheld.

A subsequent notification was issued on 7th January 2016, by the Central Government in supercession of its earlier notification of 2011 and in effect permitted the use of bulls as performing animals in events like Jallikattu and bullock cart races. The notification provides a number of safeguards like the venue of such an event should be a place where such event is traditionally held annually; the bulls are put to proper testing by the authorities of the Animal Husbandry and Veterinary Department to ensure that they are in good physical condition to participate in the event and performance enhancement drugs are not administered to the bulls in any form, etc. The said notification is the subject matter of challenge in the case where the Hon’ble Supreme Court has reserved its judgment on 07.12.2016.

A blanket ban on a practice of cultural importance will not be a solution to prevent cruelty to animals and will do more harm than good in the form of completely unregulated and illegal organization of such events with no regard to the health of the bulls.

Among other factors, which have to be borne in mind before condemning the traditional sport altogether is its relevance as an incentive to breed and raise the indigenous cattle breed (the Kangayam breed of bulls is the animal participant in Jallikattu). Article 48 under the DPSPs clearly enjoins upon the State to “take steps for preserving and improving the breeds, and prohibiting the slaughter, of cows and calves and other milch and draught cattle”.

The Centre has now approved a draft ordinance on Jallikattu by the State of Tamil Nadu,which seeks to exempt Jalliakttu from the Prevention of Cruelty to Animals Act, 1960. An ordinance is also “law” under Article 13(3)(a) of the Constitution of India. The Ordinance will have the effect of “removing the basis” of the 2014 judgment of Supreme Court which struck down the Tamil Nadu Jallikattu Regulation Act, thereby curing basis of the law declared by the Hon’ble Supreme Court on the subject matter. There have been several instances in the past where the effect of a judgment has been neutralized by passing law removing the basis of the judgment (ShriPrithvi Cottons Mills Vs. Broach Borough Municipality & Ors. 1970 SCR (1) 358).

In fact this sport is not unique to Indian culture alone. Even Spain’s top Constitutional Court has overturned a regiional government’s ban on bullfighting. Nine of the 12 judges ruled that the “preservation of common cultural heritage” was the responsibility of the state and found the same to be “one more expression of a cultural nature that forms part of the common cultural heritage”. Similarly in 2012, the Constitutional Court of France upheld the tradition and rejected a challenge to the bullfighting exception contained in the animal cruelty provisions of the country's criminal code.

As a long term solution, a comprehensive law should be envisaged with all necessary safeguards balancing the traditional and indigenous rights of the people of Tamil Nadu to continue with the sport of Jallikatu while also providing a detailed scheme which would ensure that the animals are not ill-treated and subjected to inhuman methods in the name of the sport. The sport should be allowed by law under proper medical supervision and care and veterinarians should be available at the venue to ensure that emergency medical care can be provided to the animals. All of this should be done with an expert Committee with experience in the filed of Animal Husbandry. To ensure that the law is not called into question by way of judicial review, it should be placed in the Ninth Schedule, which would ensure that the uncertainties surrounding this sport is not repeated and the judiciary is not invited to take a view, which is not acceptable to the people of the State. The Supreme Court has held in I.R. Coeho v. State of T.N. (2007) 2 SCC 1 that laws in the Ninth Schedule can only be called into question if the basic structure of Constitution is violated. A law allowing Jalikattu can certainly not be questioned on the grounds of basic structure and therefore this issue can thus be given quietus, once and for all.

Mohan Parasaran is Ex-Solicitor General of India and Senior Advocate.