Exclusive ; Jethmalani relying on Shreya Singhal submits that NJAC Act is too vague and to be declared invalid; Read his written submissions before Constitution Bench 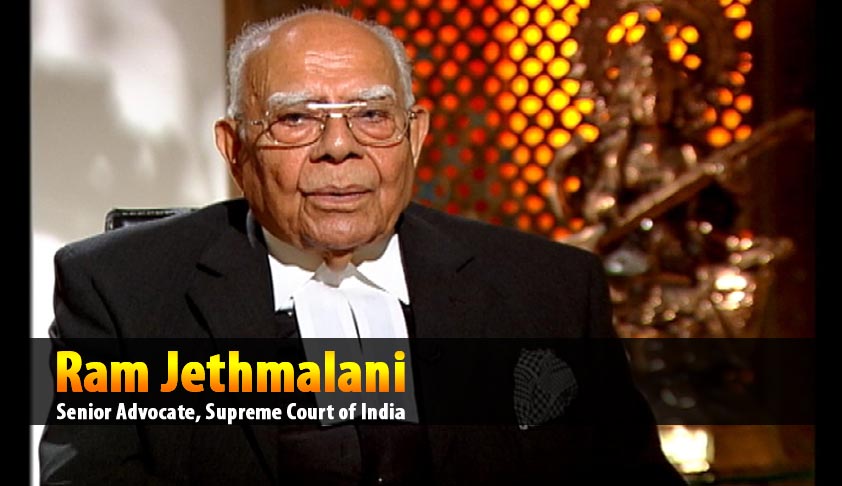 Well known Jurist and Senior Advocate Ram Jethmalani appearing for Advocate Ashish Dixit, an intervener in the NJAC matter, submitted before the Constitution Bench that a statute even a Constitutional Amendment Statute has to be declared invalid of it’s too vague and makes the task of its application or enforcement impossible or even difficult. Relying on the landmark Judgment of Supreme...

Well known Jurist and Senior Advocate Ram Jethmalani appearing for Advocate Ashish Dixit, an intervener in the NJAC matter, submitted before the Constitution Bench that a statute even a Constitutional Amendment Statute has to be declared invalid of it’s too vague and makes the task of its application or enforcement impossible or even difficult. Relying on the landmark Judgment of Supreme Court in Shreya Singhal v. Union of India he submitted that the reference to two eminent persons in the National Judicial Appointment Commission Act is provision of this kind and void.

(b) I will rely mainly on the concurring judgment of Justice Pandian (See Para 8 at page 505).

(c) In Para 9 he made it clear that the matter involved reconsideration of Gupta’s Case (1981) Supp SCC 87.

(d) In Para 19-20 relying on the Canadian decision of Dickson C.J he held that interpretations of some statute can change with altered social conditions arising out of decades gone by.

“Constitution is not ever locked in a century old casket. It lives and breathes and is capable of growing to keep pace with the growth of the Country and its people’.

In Para 21 he referred to the new dynamic judicial activism, a vital change.

III. He notes that even Justice Bhagwati who authored the Guptas final conclusions under challenge was not happy with the conclusion reached by him. His own judgment indicates that Bhagwati was not happy with what he thought was compelled by the words of the Constitution. This Para itself indicates what kind of National Judicial Appointment is required, “ It must consists of persons who have knowledge of the persons to be appointed and the qualities required for appointment and this last requirement is absolutely essential”. This is insurance of independent judges only being appointed.

VII. Any constitutional amendment which diminishes or dilutes the primacy of the Chief Justice recognized by 1993 and 1998 judgment of this Court is void as repugnant to the basic feature of the Constitution and also inconsistent with the nine judge bench.

The Constitutional position today is that the executive will be entitled to and bound to consult the Chief Justice and the CJI’s view is binding on the President. This right has been taken away from him and he is made to share it with 5 others.

Any two joining together can render the proceedings nugatory and no appointment desired by the judiciary can take place. His power to appoint and fill up all vacancies can be just extinguished.

The executive which had only the right and duty to participate in the consultation process has now a Constitutional power to vote and the law minister with his asset of vast patronage can get one vote on his side and render the judiciary impotent; with two more on his side can often not only create a dead lock but also appoint their own person.

Judicial primacy = the view of the CJI overruling the executive suggestion is wholly repugnant to Article 50 of the Constitution. See Para 31 of Pandiyans concurring judgment at Page 515.

Para 196 at page 565- Final Conclusions accepted by all the majority judges.

VIII. Presence of the Law Minister in the commission diminishes the confidence of the public or the citizens claiming protection against breach of fundamental rights or seeking relief against illegal unconstitutional or mala fide action of the executive. A minister in regular meetings often leading to social meetings and private talk, scandals and gossip disqualifies judges. The major litigants employee in constant touch with Judges and perhaps participating in appointments shakes public confidence. It is a well known feature of the pro-collegium case of 1993 candidates for judicial office cultivated politicians. Politicians are not known these days for integrity.

The two lay citizens must include a distinguished lawyer enjoying the confidence of the bar and bench, preferably an acknowledged Jurist and the second a trained sociologist who understands the misery of the poor, the causes of poverty and legal reform connected with these grave problems of our polity. Other lesser mortals are not needed. Reference to castes and gender makes invalidity a certainty.