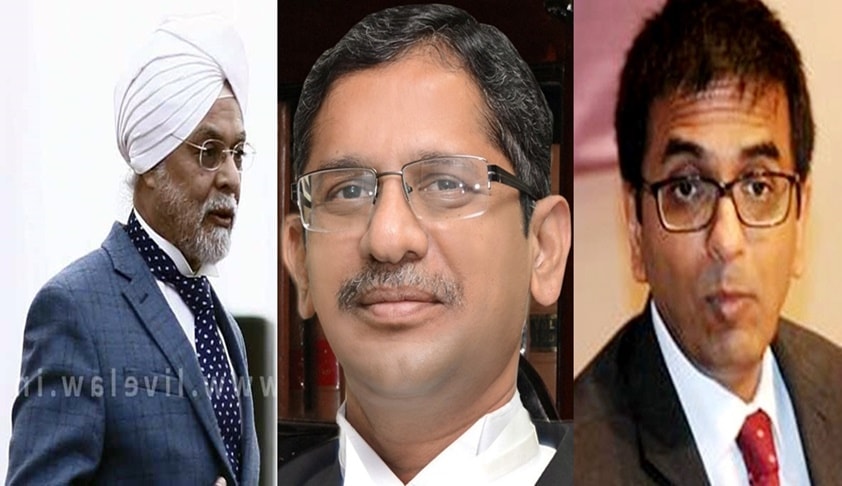 In a landmark judgment Supreme Court of India has held that an appointment to a post or admission to an educational institution – on the basis that the candidate belongs to a reserved category for which the benefit is reserved, the invalidation of the caste or tribe claim upon verification would result in the appointment or, as the case may be, the admission being rendered void or non-est.

A three Judges Bench of Chief Justice JS Khehar and Justices NV Ramana and Dr.DY Chandrachud was considering a batch of petitions which involved persons who sought the benefit of public employment on the basis of a claim to belong to a beneficiary group which has, upon investigation been found to be invalid.

In the Judgment which runs in to more than 100 pages written by Justice Chandrachud has discussed various Supreme Court and High Court Judgments relating to the issue. The Bench has examined the questions in the light of legislative framework under Maharashtra Act XXIII of 2001.

At the outset the Court observed that in pursuit of the constitutional goal of substantive equality, reservations have been envisaged as a means of enabling members of beneficiary groups to realise, in a true sense, dignity, freedom and liberty which the Constitution guarantees as its basic philosophy. But the problem which has confronted legislatures, policy makers as well as courts (as enforcers of the rule of law) is a capture of the benefits of affirmative action programmes by persons who do not genuinely belong to the beneficiary groups.

The Bench observed that when a person who does not belong to a caste, tribe or class for whom reservation is meant, seeks to pass off as its member, such a stratagem constitutes a fraud on the Constitution.

“For one thing a person who is disentitled to the benefit of a welfare measure obtains the benefit. For another this deprives a beneficiary who is genuinely entitled to receive those benefits of a legitimate entitlement. This constitutes an egregious constitutional fraud. It is a fraud on the statutes which implement the provisions of the Constitution. It is a fraud on state policy”

The Court said the present batch of cases raises the fundamental issue as to whether such equities are sustainable at law and, if so, the limits that define the jurisdiction of the court to protect individuals who have secured access to the benefit of reservation inspite of the fact that they do not belong to the caste, tribe or class for whom reservation is intended.

Justice Chandrachud observed that the selection of ineligible persons is a manifestation of a systemic failure and has a deleterious effect on good governance.

“Firstly, selection of a person who is not eligible allows someone who is ineligible to gain access to scarce public resources. Secondly, the rights of eligible persons are violated since a person who is not eligible for the post is selected. Thirdly, an illegality is perpetrated by bestowing benefits upon an imposter undeservingly. These effects upon good governance find a similar echo when a person who does not belong to a reserved category passes of as a member of that category and obtains admission to an educational institution. Those for whom the Constitution has made special provisions are as a result ousted when an imposter who does not belong to a reserved category is selected. The fraud on the constitution precisely lies in this. Such a consequence must be avoided and stringent steps be taken by the Court to ensure that unjust claims of imposters are not protected in the exercise of the jurisdiction under Article 142.

The Court observed that when a candidate is found to have put forth a false claim of belonging to a designated caste, tribe or class for whom a benefit is reserved, it would be a negation of the rule of law to exercise the jurisdiction under Article 142 to protect that individual.

“The legal system cannot be seen as an avenue to support those who make untrue claims to belong to a caste or tribe or socially and educationally backward class. These benefits are provided only to designated castes, tribes or classes in accordance with the constitutional scheme and cannot be usurped by those who do not belong to them. The credibility not merely of the legal system but also of the judicial process will be eroded if such claims are protected in exercise of the constitutional power conferred by Article 142 despite the state law”.

The Court has agreed with the Judgments in R. Vishwanatha Pillai and in Dattatray Case which laid down the principle of law that where a benefit is secured by an individual – such as an appointment to a post or admission to an educational institution – on the basis that the candidate belongs to a reserved category for which the benefit is reserved, the invalidation of the caste or tribe claim upon verification would result in the appointment or, as the case may be, the admission being rendered void or non est. But the exception to the above doctrine was in those cases where this Court exercised its power under Article 142 of the Constitution to render complete justice. The Court also held that Withdrawal of benefits secured on the basis of a caste claim which has been found to be false and is invalidated is a necessary consequence which flows from the invalidation of the caste claim and no issue of retrospectivity would arise.