Judge Loya Case - Conduct Of Petitioners & Intervenors Prima facie Constitutes Contempt, But We Have Chosen Not To Initiate Proceedings: SC 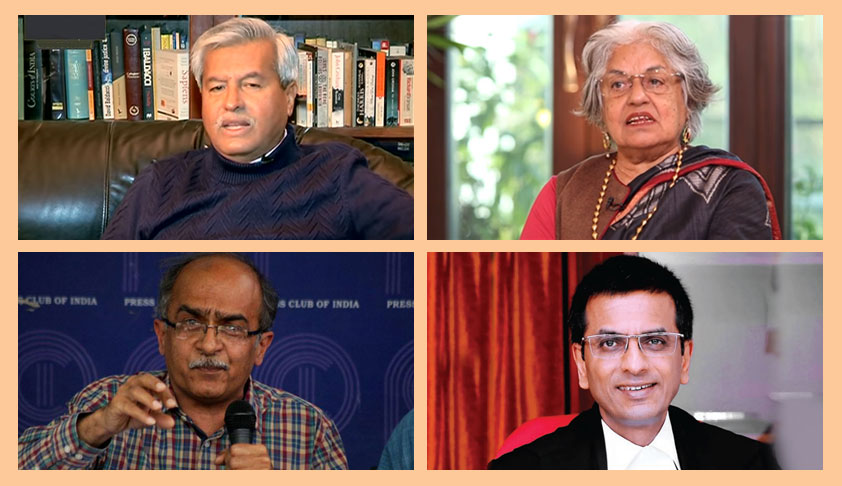 We rest in the hope that the Bar of the nation is resilient to withstand such attempts on the judiciary. The judiciary must continue to perform its duty even if it is not to be palatable to some., the Bench said.

The Supreme Court bench headed by Chief Justice of India Dipak Misra, while dismissing the Public Interest Litigation seeking probe into the death of Judge Loya, has come down heavily on PIL petitioners and intervenors.

Justice DY Chandrachud, who authored the Judgment, observed that the conduct of the petitioners and the intervenors in the Judge Loya Case, scandalized the process of the court and it prima facie constitutes criminal contempt.

The Court said that though the counsel who appeared for petitioners told the court that they have no personal agenda and that they have instituted these proceedings to protect judicial independence, as the submissions evolved, it became clear that ‘the petition is a veiled attempt to launch a frontal attack on the independence of the judiciary and to dilute the credibility of judicial institutions.’

Vituperative assault on the judiciary

The Court quoting submissions made by Senior Lawyers who appeared in the case said: “Mr Dave has urged that (i) he wants to cross-examine the judges; and (ii) he does not believe the judicial officers. Aspersions have been cast on the Administrative Committee of the Bombay High Court. This court has been called upon to issue a notice of contempt to the judges on the Committee at the relevant time. Ms Jaising has joined the fray by requesting that this court to issue contempt notices to the Administrative Committee of the Bombay High Court. Junior counsel appearing with Mr Giri went to the extent of urging that the judicial officers whose statements were recorded during the discreet inquiry are suspect. Even the judges of this Bench hearing the present proceedings have not been spared from this vituperative assault on the judiciary.”

The Court also took serious note of Senior Advocate Prashant Bhushan argument that because two of the judges Justice AM Khanwilkar and Justice DY Chandrachud were judges of the Bombay High Court, they may have known the judicial officers who have submitted statements or Justice Bhushan Gavai and Justice SB Shukre.

The Bench said: “If this were to be the test, it is rather ironical that the petitioners had instituted proceedings before the Bombay High Court each of whose judges were expected to be faced with the same situation. We informed Mr Bhushan that a decision as to whether a judge should hear a case is a matter of conscience for the judge. There is absolutely no ground or basis to recuse. Judges of the High Court hear intra court appeals against orders of their own colleagues. References are made to larger Benches when there are differences of view. Judges of the Supreme Court hear appeals arising from judgments rendered by judges of the High Courts in which they served, either as judges or on appointments as Chief Justices. Maintaining institutional civilities between or towards judges is distinct from the fiercely independent role of the judge as adjudicator. We emphatically clarify that on the well-settled parameters which hold the field, there is no reason for any member of the present Bench to recuse from the hearing. While it is simple for a judge faced with these kinds of wanton attacks to withdraw from a case, doing so would amount to an abdication of duty. There are higher values which guide our conduct.”

The Court observed that serious attacks have been made on the credibility of two judges of the Bombay High Court and the conduct of the petitioners and the intervenors scandalises the process of the court and prima facie constitutes criminal contempt.

However, the Court did not resort to initiate contempt proceedings against anyone in this case by observing thus: “However, on a dispassionate view of the matter, we have chosen not to initiate proceedings by way of criminal contempt if only not to give an impression that the litigants and the lawyers appearing for them have been subjected to an unequal battle with the authority of law, the Bench said.

The Court further remarked: “We rest in the hope that the Bar of the nation is resilient to withstand such attempts on the judiciary. The judiciary must continue to perform its duty even if it is not to be palatable to some. The strength of the judicial process lies not in the fear of a coercive law of contempt. The credibility of the judicial process is based on its moral authority. It is with that firm belief that we have not invoked the jurisdiction in contempt.”

The Court concluded its judgment by observing that the conduct of the petitioners and the intervenors is lacking in bona fides and reveals a misuse of judicial process.