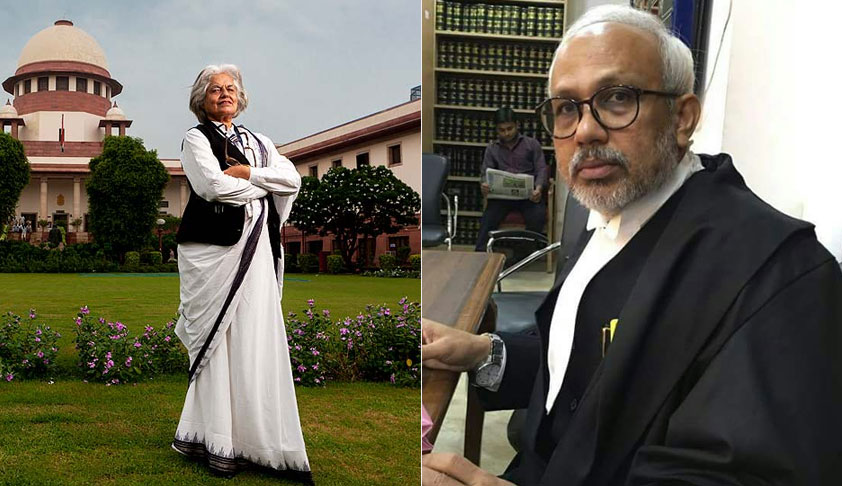 As the hearing in the two writ petitions seeking independent probe in the death of CBI Special Judge Loya resumed before the Supreme Court bench of Chief Justice Dipak Misra, Justice D. Y. Chandrachud and Justice A. M. Khanwilkar on Friday, Senior Counsel Indira Jaising advanced submissions on an intervention application.“There are two sets of submissions, one, on the basis of law, and...

“There are two sets of submissions, one, on the basis of law, and the other, on the basis of facts. The former are primarily regarding the contravention of the provisions of section 174 of the Cr. P. C.”, she stated.

Referring to the provisions of section 176 of the Cr. P. C. on the inquiry by a magistrate into a death covered under section 174, she advanced,

“Section 176 permits the magistrate to even disinter a dead body for examination. Further, the Explanation appended to the section defines ‘relative’ as ‘parents, children, spouse, brothers and sisters’. So how was judge Loya’s dead body handed over to Dr. Prashant Rathi? And why was his family not present at the time of the Post Mortem?”

Moving on, Ms. Jaising submitted, “The Inquest Panchnama of the personal belongings has not been produced. It was said the mobile phone was returned a few days later. There is also a discrepancy with regard to clothes. Further, how is the date of death in the inquest report dated December 1, 2014 written as December 7, 2014?”

“December 1, 2014 only has been mentioned as the date of death. It is only because of the way of writing that ‘1’ is appearing as ‘7’”, retorted Senior Counsel Mukul Rohatgi, appearing for the state of Maharashtra.

“Finally, the case diary has not been furnished. It is important to know the time at which the police station received a call that an accidental death has ensued. The diary would also provide a minute by minute account of the happenings so that Your Lordships can decide if these documents have been generated contemporaneously or later”, she continued.

Moving on to the hospital records, Ms. Jaising said, “The doctor’s progress report says ‘ECG done’. But by whom? At Dande or at Meditrina? Why has the ECG report not been produced?”

When Justice Chandrachud referred to a statement on record to the effect that an ECG was carried out at the Dande Hospital, Ms. Jaising advanced that the statement is “most likely false” as the ECG report has not been furnished, the person making the statement is not an eye witness to the fact of the ECG and that it is contravention of the statement of judge Rupesh Rathi, which she regarded as the “most credible statement”.

Thereupon, she quoted portions from judge R. Rathi’s statement- “...At Ravi Bhawan, judge Loya was attending to nature’s call when he appeared complaining of chest pain...he was taken to Dande Hospital in judge Barde’s car...judge Waikar’s help was also sought...the hospital was on the first floor so we climbed the stairs...judge Loya was sweating...the doctor tried to carry out the ECG but the machine was broken and could not be fixed...the doctor administered two injections to judge Loya...I called my cousin Dr. Prashant Harkoot who recommended that we immediately bring judge Loya to Meditrina Hospital...there were two separate cars...by the time we reached Meditrina, judge Loya was unconscious and was taken inside for treatment...he was treated for some time after which we came to know he had suffered a heart attack...finally, we came to know that he had passed away...it was an extremely sad and unfortunate incident...”

“We do not know if the cause of the death was heart attack or not. To ascertain the cause of death, it is necessary that the family members narrate the clinical history which is to be matched with the hospital reports. But the requirement of section 174 of the Cr. P. C. was not followed”,

“Judge Loya’s sister has stated that family history, habits of smoking, tobacco consumption and drinking, a condition of obesity etc are regarded as factors leading to a heart attack by cardiologists, but none of these were applicable to her brother. He was only 48 years old. Their parents were over 80 years old, alive and healthy. He did not even have a sedentary lifestyle and routinely indulged in sports”, she continued.

“When there is doubt regarding the cause of death, it is for the Investigating Officer to decide whether to pursue the procedure under section 174 of the Cr. P. C. or to register a FIR. In this case, neither was done. This is my submission”, advanced Ms. Jaising.

She cited the judgment on State of Haryana v. Bhajan Lal (1990) in so far as it was observed therein, “The expression ‘reason to suspect the commission of an offence’ used in section 154(1) Cr. P.C. would mean the sagacity of rationally inferring the commission of a cognizable offence based on the specific articulate facts mentioned in the First Information Report as well in the Annexures, if any, enclosed and any attending circumstances which may not amount to proof. In other words, the meaning of the expression "reason to suspect" has to be governed and dictated by the facts and circumstances of each case...”

“Statements of Loya’s wife, sister, father and son that there is nothing suspicious as to the death have been procured under duress and are self-serving statements which should be ignored in view of their earlier statements. The sister is a credible witness as all her statements have been corroborated. R. Rathi has backed the claim regarding climbing of stairs; Justice Gawai in his interview to the Indian Express has said that a car had broken down, supporting Loya’s sister’s statement that he had reached the hospital unaccompanied”, she continued.

“In 2015, judge Loya’s son, Anuj Loya, has made a statement that if something was to happened to him or any of his family members, the Bombay High Court Chief Justice Mohit Shah and the others involved in the conspiracy shall be responsible. And then in 2017, he has said before the Commissioner of State Intelligence that no inquiry into the death is sought?”, she said towards the conclusion of her arguments.

“An investigation is needed because this has become a matter of public importance and also because the public agencies have not done their duty”, she iterated.

At this point, Mr. Rohatgi intervened, “I was just reading the submission regarding the interview in the Indian Express. It only says that the car had brushed against another car”.

“I am only creating the grounds for investigation, not proving the case beyond reasonable doubt which would be the task of the investigator”, Ms. Jaising replied.

Referring to the 2012 Supreme Court order in CBI v. Amit Shah, transferring the Sohrabuddin trial to Maharashtra from Gujarat and directing the matter to be heard by a single judge, she submitted, “Just one day before the hearing, judge Utpat was directed by the Administrative Committee of the High Court to report to Pune. How could the transfer have been made without an application to the Supreme Court?”

“Finally, there is the letter by a retired judge of the Bombay High Court addressed to the Chief Justice of the High Court in November, 2017 for a SIT probe into the death of judge Loya”, advanced Ms. Jaising.

“Ms. Jaising is seeking an investigation but she has not done any homework. She is talking about the transfer of judge Utpat, the Sohrabuddin trial, the story in the Caravan? Why is the letter of the retired Bombay High Court judge being relied upon? It was written after the story in the Caravan was published. Is this a PIL?”, exclaimed Mr. Rohatgi.
“Are you trying to say I have a motive? Fine”, retorted Ms. Jaising, concluding her submissions.

“There is enough reason to suspect that a cognizable offence has been committed”, Jaising concluded

Thereupon, Senior Counsel P. V. Surendranath, appearing on behalf of intervenor All India Lawyers’ Union, pressed the prayer for a direction under Article 142 of the Constitution in respect of the security arrangements of judicial officers as well as  guidelines for the independence of the judiciary from the executive.

Mr. Mukul Rohatgi shall make arguments on behalf of the state of Maharashtra on Monday.