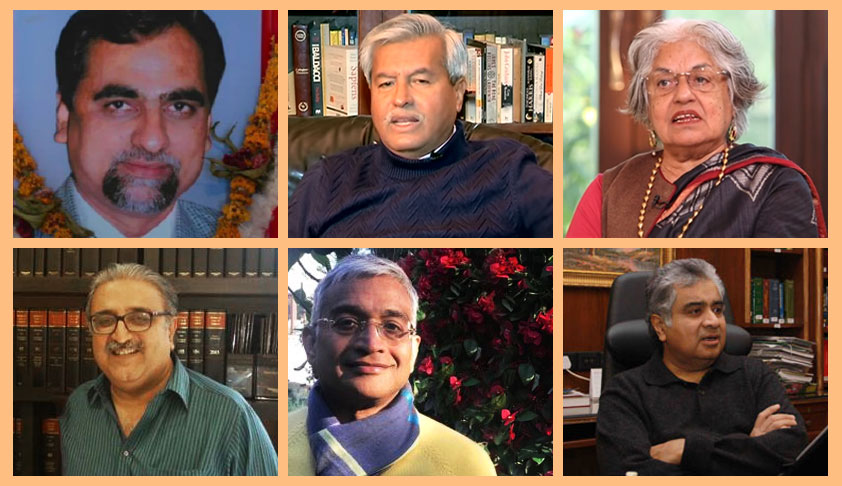 The string of writ petitions seeking an independent probe into the death of Judge Loya witnessed another eventful hearing on Monday. As the hearing resumed before the Supreme Court bench of Chief Justice Dipak Misra, Justice D. Y. Chandrachud and Justice A. M. Khanwilkar, Senior Counsel Dushyant Dave, appearing on behalf of the Bombay Lawyers’ Association, sought permission to bring on...

The string of writ petitions seeking an independent probe into the death of Judge Loya witnessed another eventful hearing on Monday. As the hearing resumed before the Supreme Court bench of Chief Justice Dipak Misra, Justice D. Y. Chandrachud and Justice A. M. Khanwilkar, Senior Counsel Dushyant Dave, appearing on behalf of the Bombay Lawyers’ Association, sought permission to bring on record additional evidence, including the video recordings of Loya’s father and sister.

Thereupon, Senior Counsel V. Giri proceeded to elaborate on the contradictions in the 2017 discreet inquiry report of the Commissioner of State Intelligence- “The report says that at around 4 AM on December 1, 2014, Loya complained of chest pain and was taken to Dande Hospital. From there, around 5 AM, he was being taken to Meditrina Hospital, accompanied by judges Barde, Modak and Kulkarni in 2 separate cars. Loya collapsed on the way. Around 7 AM, the then Chief Justice of the Bombay High Court and two other High Court judges reached the Meditrina Hospital”.

Throwing light on the contradictions, he continued, “There is nothing on record to show that judge Loya stayed at the government guesthouse Ravi Bhawan in Nagpur. There are No medical reports of Dande Hospital. Also, there has been no verification has been made of the doctors. Besides, there is no ECG report”.

Continuing in the same thread, he advanced, “PS Sitabardi recorded Dr. Prashant Rathi’s statement at 8:33 AM. The post mortem was carried out by one Dr. Tumram only at 10 AM on December 1, 2014. And the case diary of the accidental death was transferred to PS Sadar at around 4 PM. There is no verification of the fact of handing over of the body to Dr. Rathi by Police Constable Pankaj of PS Sitabardi. Also, when the records had been transferred to PS Sadar, how was the body handed over by a constable of PS Sitabardi?”

Emphasising on the reasons why an independent inquiry is indispensable, Mr. Giri submitted, “The letter dated November 23, 2017 of the Commissioner of State Intelligence addressed to the Chief Justice of the Bombay High Court named the four judicial officers and 2 high court judges who allegedly accompanied judge Loya. How was that conclusion arrived at prior to the inquiry? Further, Upon receiving permission from the High Court, instead of seeking appointments with the judicial officers, the Commissioner sent them letters.The Commissioner makes an assertion that the versions of the persons privy to the incident have been verified. But how? He only met the judicial officers and did not record the statement of other associated persons. Even Prashant Rathi’s statement was taken by some other person. It seems he conducted the discreet inquiry sitting in his armchair in Mumbai”.

“The medical officer at Dande was not examined. There is a contradiction regarding whether Loya was taken to Dande in judge Barde’s car accompanied with judges Kulkarni, Modak and Rupesh Rathi. Dr. Pankaj Harkut’s statement, a neurosurgeon at Meditrina, was not recorded. It also not clear why a neurosurgeon was even required. The inquiry should have conducted in a more concrete manner. The incident happened in 2014; why was the Commissioner so complacent as to not have the persons at Nagpur privy to the episode examined? He should have visited the Meditrina Hospital and sought verification from Dr. Rohan and Dr. Gawande but he did not. That judge Shriram Kulkarni admitted Loya at the hospital, there is only a letter from Kulkarni on evidence thereof and no verification was carried out, Mr. Giri submitted.

At this point, Mr. Dave exclaimed, “I will be filing an application under Order 11 of the Supreme Court Rules to seek permission to cross examine these judicial officers. There is a judgment to that effect”.

“We also need the original documents. The ones on record are illegible”, added Senior Counsel Indira Jaising.

“The identity of the author of the note that emergency medication, shocks etc were administered to Loya at Meditrina is not verified. All that was needed to be done was to ask the author if they signed the note and if they affirm its contents. But that was not done. There was a primary consultant and a secondary consultant at Meditrina. Why was the latter’s statement not taken?”, Mr. Giri proceeded with his submissions.

“The accidental death report was registered at PS Sitabardi based on the statement of Prashant Rathi. Why did the intimation not come from the four judicial officers? Sub inspector Munthe Constable Pankaj of PS Sitabardi were not examined. We have documents to show that the inquiry under section 174 Cr. P. C. was actually handed over to PS Sadar but there is a discrepancy as to whether at 4 PM or 8 PM”, Mr. Giri continued.

At this point, Senior Counsels Harish Salve and Mukul Rohatgi retorted, “The case diary of the accidental death was transferred to Sadar at around 4 PM”.

In addition, Mr. Salve had earlier clarified that Prashant Rathi’s statement was recorded at around 8:30 AM and the same had been transferred to Sadar; that there was no second statement.

Justice Khanwilkar also concurred with Senior Counsels for the state of Maharashtra regarding the case diary being recorded at Sadar at around 4 PM and being copied at around 8 PM. Subsequently, Justice Chandrachud also directed the petitioners to not press the ‘nakal bayaan’ at around 8 PM.

“This is a serious contradiction”, added Mr. Dave.

“None of the doctors, police officials or judicial officers have been verified in respect of the documents on which the discreet inquiry report is based. Loya was taken to the Meditrina Hospital at the recommendation of Dr. Prashant Harkut, but even this has not been verified. There is an incongruity as to whether Loya was brought dead to the Meditrina Hospital or did he die during the course of the treatment. The sequence of calls from one Dr. Hansraj Baheti to Rukmesh Jakhotiya to Dr. Prashant Rathi about Loya’s chest pain has not been verified. The state has not explained how Prashant Rathi was both at PS Sitabardi and Sadar at 8:30 AM on the date of the incident; and How does the Post Mortem Report dated December 1, 2014 show the death of death as December 7, 2014. None of the four statements of Dr. Prashant Rathi make a mention of the presence of any of the judicial officers and none of the four judicial officers in their statements have mentioned Dr. Rathi. Judge Barde’s statement avers that an ECG was carried out at Dande Hospital but there is no ECG report on record. There is also a contradictory claim that the ECG machine at Dande was broken”, elaborated Mr. Giri.

“However, not for a second are we suggesting names; may be these discrepancies can be explained. That is why an independent inquiry is essential, there is nothing untoward in this”, Mr. Giri concluded.

In his turn, Senior Counsel Pallav Shishodia made a  comparative summary of the news reports appearing in the Indian Express and the Caravan concerning the circumstances surrounding the death of CBI Special Judge Loya- “The Indian Express has relied upon inter alia the record of medical treatment and the Post Mortem report and concluded that Loya’s was a natural death, though premature on account of the cardiac arrest. This has also been backed by the state of Maharashtra. Then there is the Caravan which has based its story on unevidenced allegations of bribery through the conduit of the then Chief Justice of the Bombay High Court. One levelling claims and allegations cannot be allowed to ‘hit and run’ and must face consequences in terms of damages”.

“This exercise is like an independent inquiry as Your Lordships are seeing everything”, Mr. Shishodia concluded.

Ms. Jaising commenced her submissions with the remark, “If Mr. Shishodia’s client did not want an inquiry, then why was the petition filed?”

At this juncture,  a war of words broke out between the Senior Counsels- “The Petition was only filed to get the Bombay High Court matters transferred to the Supreme Court. The nature of the averments reveal the purpose of their petition”, exclaimed Mr. Dave.

“We do not care about what you say, Mr. Dave”, retorted Mr. Shishodia.

“Please let us not be oblivious to these portraits that look over us each day”, remarked Justice Chandrachud, indicating the portraits of the former Chief Justices of India and adding, “Mr. Dave, you have to listen to the judges when they pose a question to you”.

“I will not listen. These persons were representing Amit Shah earlier and now they are appearing on behalf of the state of Maharashtra. This is what is oppressive. They are obstructing justice. The Bar Council of India is issuing notice to me for raising the voice of truth but these people will get away”, urged Mr. Dave aggressively.

Continuing with her submissions, Ms. Jaising advanced, “there are two sets of contradictions. Mr. Giri has pointed out the contradictions internal to the inquiry report. In addition, there are certain external contradictions that have appeared in the press. I will draw your attention to the comments made in media of the two judges of the Bombay High Court”.

Reiterating that “16 persons statements have not been recorded” and deliberating on “the law relating to why and when an inquiry may be conducted”, Ms. Jaising stressed on the phrase ‘reason to suspect’ in section 157 Cr. P. C., dealing with the ‘Procedure for inquiry’.

“Mr. Giri has pointed out that all is not well; the contradictions brought out by him give enough ‘reason to suspect’. At the threshold, a prima facie case does not have to be made out”, she continued.

Thereafter, she drew the attention of the bench to three pieces of evidence not produced by the state of Maharashtra and which shall be deemed “enough to call for an inquiry”- “We have procured photocopies of the Ravi Bhawan register in which the name of judge Loya is not noted. If you take a look at entry 47, it shows Prakash Ambedkar as having resided at the guesthouse in the year 2017, though the register is of the year 2014. After this entry, there are blanks and then there are blanks and then are the name of Shrikant Kulkarni and Shrimati Phansalkar, both of whom came from Bombay. Judge Loya’s name is not here”.

“Below Kulkarni’s name, the name of the protocol officer of the Nagpur bench of the High Court, who advances requests for rooms, is written”, observed Justice Chandrachud.

“Even names of VVIPs have been mentioned, and not just the protocol officer. What I am trying to say is that the name of everyone who stays at the guesthouse, regardless of rank, is inserted in the register”, responded Ms. Jaising.

Continuing, she submitted, “the column to note the number of persons occupying a room has been left blank. Please read this together with judge Modak’s statement that ‘three of us’ stayed in one room. It is strange that three people stayed in a room with 2 beds, when there is nothing on record to show a shortage of rooms”.

“It was a suite, with 2 beds, a sofa and a desk”, noted Justice Chandrachud, remarking that rooms have been mentioned separately in the register.