A Judge Should Never Forget That He Is Under Constant Public Gaze; When He Sits On Trial, He Himself Is On Trial:Ex-CJI RC Lahoti [Read Full Text Of Constitution Day Speech] 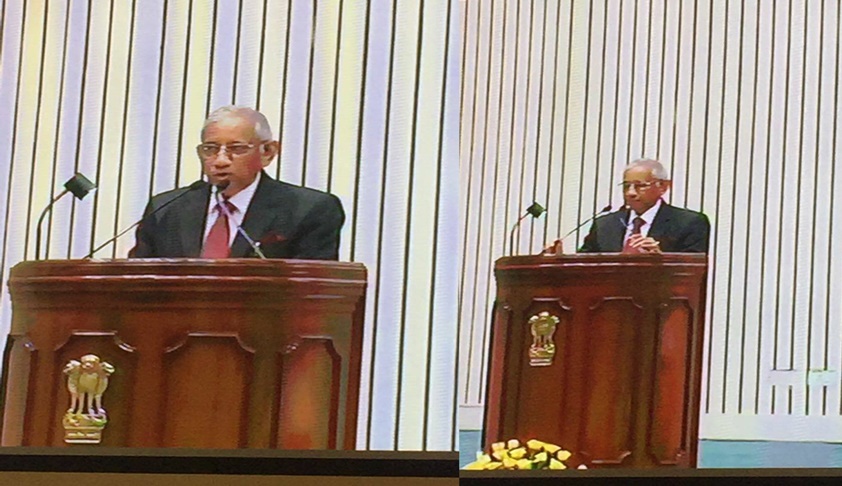 ‘Socialism’ and ‘Secularism’ are two concepts which were introduced into the original philosophy of Constitution. Their impact on Constitutional Values needs consideration, he said.Former Chief Justice of India RC Lahoti, while delivering a lecture on constitutional values, has said A judge should never forget that he is under constant public gaze; a Judge when he sits on trial,...

‘Socialism’ and ‘Secularism’ are two concepts which were introduced into the original philosophy of Constitution. Their impact on Constitutional Values needs consideration, he said.

Former Chief Justice of India RC Lahoti, while delivering a lecture on constitutional values, has said A judge should never forget that he is under constant public gaze; a Judge when he sits on trial, he himself is on trial.

He was speaking at a function organised by the Supreme Court of India on the occasion of Law Day at Vigyan Bhawan in Delhi.

“A word about judiciary to which, I too belong. The judiciary has been assigned the task of upholding the Constitution and its values. While other wings of governance may fail and falter, the judiciary shall not. While it has to preserve and protect the separation of powers, it shall not itself in its zeal transgress its own boundaries. The primary task of a Judge is to interpret and enforce the Constitution and the laws. Instinctively, and at times pro-actively, the judiciary may embark upon  making the law and also executing its directives. But the judiciary should never assume the role of a super-legislature or a super-executive. That if done, would be indulging into a misadventure resulting in irreparably weakening the legislative and executive wings”, he said.

He is the second former CJI to deliver a lecture on the Law Day. Last year, former CJI Justice MN Venkatachaliah delivered the first lecture.

The concept of Justice has three dimensions: Social, Economic and Political. Liberty, equality and fraternity form a union of trinity; if divorced from one another, the very purpose of democracy will be defeated. Dr. Ambedkar has in his closing speech on the draft Constitution delivered on 25th November, 1949 emphasized that political democracy cannot last unless it is based on social democracy.

Liberty is not synonym of freedom. [Freedom as liberation was achieved on 15.08.1947, but ] to achieve liberty there shall have to be freedom from arbitrary, undue and illegal external restraint even if it is by Government. To be a virtue, liberty has to co-exist with morality, justice, common good, discipline and order. Else, it would be oppressive of the weak, and result in anarchy.

Our Founding Fathers have not used the term equality as just equality; they hastened to qualify it as ‘equality of status’ and ‘equality of opportunity’ being achieved. Unequal, so created by the God himself or the nature itself, cannot be cut to size to make equals. Eminent Jurist Nani Palkhivala [who has been described as ‘the most intelligent of all intellectuals’ by none else than Justice H.R. Khanna], has stated – ‘equality before the law is the very foundation of a Republic; Equal opportunity is the very foundation of social justice; But equality (unqualified) is achieved only in the graveyard.’[1] It is only in the graveyard where all are buried as equals.

Fraternity, as explained by Dr. Ambedkar, is common brother-hood of all Indians. He indicated that regionalism, communalism and linguism were forces disrupting unity and integrity of India. Such fractional fraternities [gaining strength] damage the dignity of individual and pose threat to the unity and integrity of the Nation.

Constitution as originally framed dedicated itself to constituting India into a Sovereign Democratic Republic. Forty-Second Amendment substituted (w.e.f. 03.01.1977) these three words with five, namely, Sovereign Socialist Secular Democratic Republic. Thus, ‘Socialist’ and ‘Secular’ are two concepts which were introduced into the original philosophy of Constitution. Their impact on Constitutional Values needs consideration.

So far as the term ‘Socialist’ is concerned, our Constitution did not recognize any ism; the only ism it recognized was Nationalism. Forty-Second Amendment gave recognition to Socialism, a politically and economically controversial concept like all other isms.

So far as ‘Secularism’ is concerned, two significant historic events need to be recalled.

An interesting debate centered round the drafting of present Article 25 dealing with right to freedom of religion.[2]This Article guarantees freedom of conscience and the right freely to ‘profess’ ‘practice’ and ‘propagate’ religion. Much of the controversy centred round the right to propagate religion. It was emphatically urged before the Constitutional Assembly that religion was a private affair between oneself and one’s creator and it has nothing to do with others, and therefore, the right to propagate religion was wholly unnecessary; all that the individual needed was the right ‘to profess and practice religion privately’. [The assembly was told that propagation of religion had proved a nuisance in the country and putting it as an independent Fundamental Right was wholly unjustified.] ‘The dangerous implications’, the expression as the Constituent Assembly Debates record, did not appeal to the wisdom of the Assembly and the Article was enacted in the present form giving the right to propagate religion status of fundamental right!.

The other event is associated with the Hindi translation of the term ‘Secular’. Initially, secular was translated as Dharma Nirpeksh. On invitation of the then Prime Minister, the eminent jurist late Dr. L.M. Singhvi suggested – ‘secular’ being translated as Panth Nirpeksh (equivalent to Sampradhay Nirpekh) and not as Dharma Nirpeksh. The suggestion was agreed to and Dr. L.M. Singhvi carried out correction in his own hand in the Hindi text.

These two events have far-reaching implications which this august audience can well appreciate.