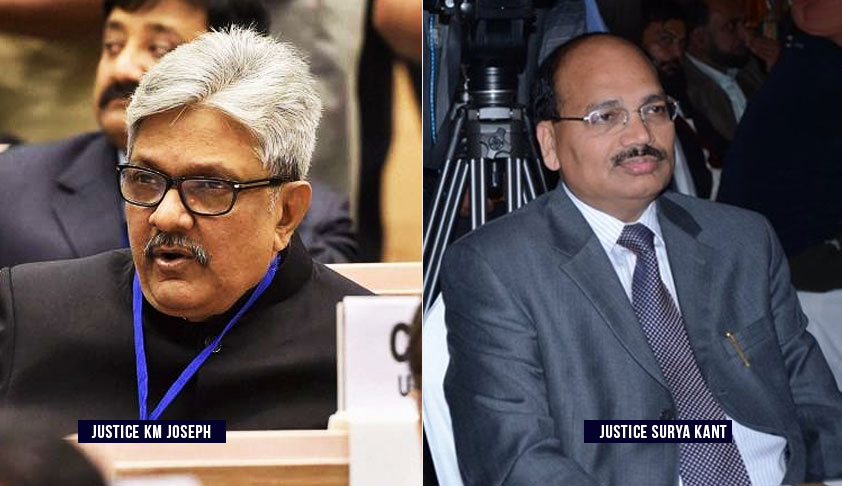 The Centre has reportedly blocked the recommendations of the Supreme Court Collegium to appoint Uttarakhand high court chief justice K.M.Joseph as a Judge of the Supreme Court and Justice Surya Kant of Punjab and Haryana high court as Chief Justice of the Himachal Pradesh high court.  Although there is no official confirmation of  that report and the Centre has not returned the recommendation to the Collegium yet for its reconsideration, reports appearing in the media suggest that the Centre has certain reservations about these recommendations. LiveLaw answers the questions that readers may have on this controversy, as it has unfolded so far.

Q: The present recommendations to elevate Justice K.M.Joseph and Justice Surya Kant were sent on January 10.  Yet, the Centre is neither returning them for reconsideration by the Collegium, nor going ahead with these appointments.   Does the Centre have the option to sit over the  Collegium’s recommendations and take its own time to process it?

A: The existing Memorandum of Procedure (MoP) is very clear.  Paragraph 3.5 says after receipt of the final recommendation of the Chief Justice of India, the Union Minister of Law and Justice will put up the recommendations to the Prime Minister who will advise the President in the matter of appointment.  It does not envisage any inexplicable time gap between the submission of the recommendation by the collegium and the Centre’s duty to act on it.

Q:  The Centre is reportedly of the view that Justice Joseph does not enjoy seniority in the all-India list, an important criterion for selection.  Is it a valid claim?

It also said that  the legitimate expectation of the High Court Judges  to be considered for appointment to the Supreme Court, according to their seniority” must be duly considered.

The statement made thereafter is very important; it is: “Obviously, this factor applies only to those considered suitable and at least equally meritorious by the Chief Justice of India for appointment to the Supreme Court.”

The Supreme Court’s judgment in the Third Judges case (1998), after reproducing this paragraph from the Second Judges case, held: “Merit, therefore, as we have already noted, is the predominant consideration for the purposes of appointment to the Supreme Court”.    It continued:

“Where, therefore, there is outstanding merit, the possessor thereof deserves to be appointed regardless of the fact that he may not stand high in the all India seniority list or in his own High Court.  All that then needs to be recorded when recommending him for appointment is that he has outstanding merit.  When the contenders for appointment to the Supreme Court do not possess such outstanding merit but have, nevertheless, the required merit in more or less equal degree, there may be reason to recommend one among them because, for example, the particular region of the country in which his parent high court is situated is not represented on the Supreme Court bench.  All that then needs to be recorded when making the recommendation for appointment is this factor.  The “strong cogent reasons” for appointing to the Supreme Court a particular High Court Judge, not for not appointing other High Court Judges senior to him.”

This, seen in the context of what the Collegium said in its resolution on January 10 with regard to the outstanding merit of Justice Joseph, is clear that the Collegium is aware of his position in the all-India seniority list, and yet recommended him, in view of his “outstanding merit”.  The Collegium said: “Justice Joseph is more deserving and suitable in all respects than other chief justices and senior judges of the high courts for being appointed as SC judge”.  While recommending the name of Justice Joseph, the collegium took into consideration combined seniority on all-India basis of chief justices and senior judges of High Courts, apart from merit and integrity.

Q: According to law ministry sources, cited in the news report, Justice Joseph was 12th in the list of seniority of CJs of 24 high courts, and at the 45th position in the all-India Judges’ seniority list.  The “legitimate expectation” of the high court Judges to be considered for appointment  to the Supreme Court in his turn according to his seniority, has also been cited by the ministry.   What is the basis of this claim?

A: The paragraphs culled from the Second and Third Judges cases, reproduced in the answer to the previous question,  are an answer to the Centre’s contention.  Therefore, the Centre’s defence is no defence at all.  Rather, it is a distortion of what the  Supreme Court had held in these cases.

Q: In the case of Justice Surya Kant, it appears, some Judges of the Supreme Court feel that Justice A.K.Mittal, who is senior to Justice Kant, was superseded unjustly.  Justice  Ashok Bhan, a former SC Judge, has apparently written a letter to the Centre slamming the Collegium for superseding Justice Mittal, on the basis of an Intelligence Bureau report of 2003.  Justice Bhan has disclosed that the IB report was discarded by the then collegium headed by the then CJI,  V.N.Khare.   The High Court Collegium too favoured Justice Mittal’s appointment to the high court, Justice Bhan has disclosed.

Justice Adarsh Kumar Goel, a consultee Judge has apparently sought taking a fair view of the assets acquired in Delhi, Shimla and Punjab by Justice Kant, after becoming a Judge.  Is the Centre justified in blocking Justice Kant’s elevation, based on these facts?

A: The collegium has made this clear in its January 10 resolution as follows: “ Though Mr. Justice A .K.Mittal is senior to Mr.Justice Surya Kant in the seniority of Judges of the Punjab and Haryana High court, having regard to all relevant factors and since we consider Mr.Justice Surya Kant more suitable than Mr.Justice A.K.Mittal, we are not recommending name of the latter, for the present, for appointment as the Chief Justice.”

The resolution, it may be noted, is silent on the 2003 IB report on Justice Mittal, which Justice Ashok Bhan has cited in his letter to the Centre.   Secondly, the Collegium has also kept the doors open for considering Justice Mittal, for suitable elevation, later.   Justice Surya Kant retires on  February 9, 2024, while Justice Mittal retires on September 29, 2020.   Both were appointed as Permanent Judges on the same day, January 9, 2004.

Q: Why is the Centre not returning the recommendations for reconsideration by the Collegium, if it has some reservations?

A:  The answer is obvious.  If the collegium reiterates its recommendations, they are binding on the Centre, as held in the Second Judges case.  The relevant paragraph reads as follows:

“Non-appointment of anyone recommended, on the ground of unsuitability must be for good reasons, disclosed to the CJI to enable him to reconsider and withdraw his recommendation on those considerations.   If the CJI does not find it necessary to withdraw his recommendation even thereafter, but the other Justices of the Supreme Court who have been consulted in the matter are of the view that it ought to be withdrawn, the non-appointment of that person for reasons to be recorded, may be permissible in the public interest. If the non-appointment in a rare case, on this ground, turns out to be a mistake, that mistake in the ultimate public interest is less harmful than a wrong appointment.  However, if after due consideration of the reasons disclosed to the CJI, that recommendation is reiterated by the CJI, with the unanimous agreement of the Judges of the  Supreme Court consulted in the matter, with reasons for not withdrawing the recommendation then that appointment as a matter of healthy convention ought to be made.”

Sitting on the recommendation of the collegium, as the Centre is doing now, is certainly not an option for the Centre.  Had the Supreme Court anticipated this in the second and third Judges cases, it would have considered laying down some time limit for the Centre to act on the recommendations.   The Supreme Court’s judgment in the National Judicial Appointments Commission case in and the consequential judgment in the Collegium reform, in 2015, too did not anticipate that the Centre could adopt a confrontationist approach vis-à-vis the collegium’s recommendations.   As many senior advocates in the Supreme Court feel a solution to this stalemate could only be found if the  Court takes note of it judicially, and takes remedial steps.