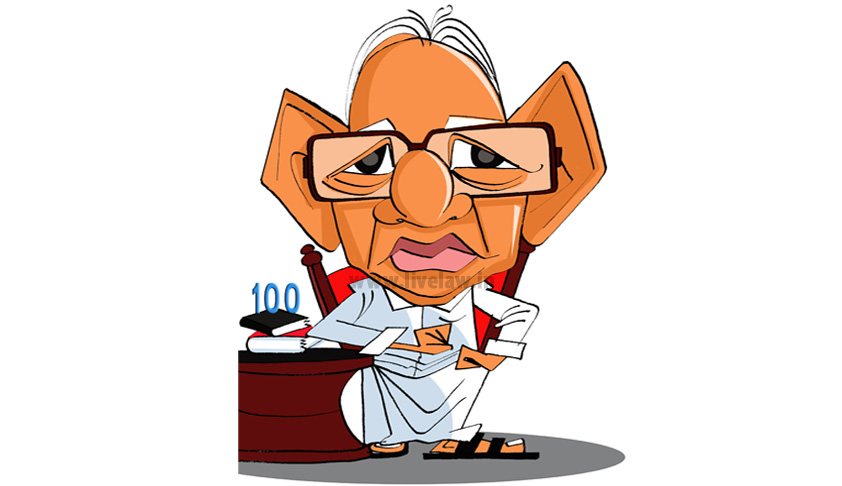 Justice V.R. Krishna Iyer, the man who is considered as the “judicial conscience of India”, the one responsible for “humanizing law in India”, turned 100 this month, achieving milestones and setting new ones, throughout the journey.Our country has had several intellectually enlightening judges. Their opinion and insight has sculptured the progression of justice in the country. But...

Justice V.R. Krishna Iyer, the man who is considered as the “judicial conscience of India”, the one responsible for “humanizing law in India”, turned 100 this month, achieving milestones and setting new ones, throughout the journey.

Our country has had several intellectually enlightening judges. Their opinion and insight has sculptured the progression of justice in the country. But Justice Krishna Iyer’s opinions travel far beyond mere expansion of the legal mind. It beseeches influences and stirs our conscience to be better human beings. In this sterling excellence, Justice Krishna Iyer stands tall and alone.

Justice Krishna Iyer was born on November 15, 1915, and his birth date is being celebrated on Saturday. He is to be felicitated by citizens of Kochi on November 16 at the Durbar Hall ground. The function is to be attended by the CM and the Leader of Opposition.

Justice Iyer holds the rare distinction of being first a Minister in State a Cabinet and later a Judge of the High Court and Supreme Court. He was the Law Minister of Kerala in the first democratically elected Communist Government led by E.M. Sankaran Namboodiripadu. The government was later dismissed by Nehru Government by misusing Article 356 for the first time in Indian Constitutional history. In 1968 he was appointed as a Judge in the High Court of Kerala and in 1971 he became a member of Law Commission of India.  His appointment to Supreme Court in 1973 was protested by leading members of the bar including Soli Sorabji because of his affiliation to the leftists.

Justice Iyer has been credited to open the doors of the judiciary to every person of the country by emphasizing on the need for relaxing the rule of locus standi, in the case of Fertilizer Corporation Kamgar v. Union of India. Reviewing the social foundations of Constitutionalism in India, Justice Krishna Iyer struck at the roots of the dominant perspectives, by folding “Constitutional patriotism” into “Constitutional commitment”. Never shying away from serving his thoughts on an eloquently enriched platter, he once rightfully stated, “The butcher, the baker, the candlestick maker, the bonded laborer, the pavement dweller, the damsel in distress, the sweated worker, the starving child, the dalit, the tribal and the socio-economic pariah shall have a vested interest in the Republic, only if the Constitution has a vested interest in their Survival, their human worth and personhood.”

Wishing him on his birthday, PM Narendra Modi accurately said, “Legal luminary, philosopher and intellectual, Justice Krishna Iyer is an Institution in himself, who dedicated his life to the nation," Prime Minister Modi said. Justice Iyer's life and works are an inspiration to all of us. My interactions with him have been very enriching. I learnt a lot from him.”

“He will gracefully respect you, but don’t expect him to stop speaking out his mind,” says Kochi Mayor Tony Chammany, recalling his interactions with the legal luminary. The humility with which he carries himself, oblivious of the number of souls he inspires with every word of his is extraordinary.

“When Iyer speaks the entire nation listens,” noted jurist Fali S Nariman once said. Supreme Court Judge A.K. Sikri has gone to the extent of envisaging the need of the hour as “a modern K Iyer with great experience and skills of communication.” He elaborates, "...What I want to emphasize is one needs to delve into the methodology which Justice Iyer adopted as a judge and remodel the same to suit the needs of the present on the basic foundation which he created while establishing his judicial philosophy.”

Justice Iyer has passed some path-breaking judgments, shaping the way justice is served in India. Sunil Batra v. Delhi Administration, the case which earned him the title of “Father of prison jurisprudence”, declared the practice of keeping undertrials with convicts in jail as inhumane.

The Judicial opinion in the case of Ratlam Municipal Council v. Shri Vardhichand laid the foundations of the responsibilities to be observed by a local municipal body, giving people the access to enforce public duties and held that municipalities and corporations are responsible for sanitation facilities.

Expanding the scope of Article 21 to include liberties of travel in 1978, in the case of Maneka Gandhi v. Union of India case, Justice Iyer noted, “Personal liberty makes for the worth of the human person. Travel makes liberty worthwhile.” His judgement in the Indira Gandhi case in 1975 was controversial, and earned him both accolades and criticism. It was Justice Krishna Iyer’s judgement that snowballed the political crisis, leading to the imposition of the emergency.

Constantly bearing in mind the needs of the society at large, in July 2010, Justice V.R. Krishna Iyer was one of the few who garnered support to a campaign to introduce Islamic Banking and Finance in India, reasoning that Islamic Banking provided the humane face to the business of banking and it took in to consideration the needs of the poor with kindness and compassion.

Justice Krishna Iyer did transform the Court from a conservative institution into a radical instrument of democratic dynamism. Talking about his journey to LiveLaw, Justice Iyer recalls, “The highest court became the watchdog of the Executive and the Legislature of the Nation.  The fundamental rights which empowered the citizens found implementation through Public Interest Litigation by the radicalization by a group of judges.  Among this group were Justice Chinnappa Reddy, Justice Bhagwati, Justice Desai and myself.  We made the court a power which made the left value of the Constitution a reality.   Whether it is an exaggeration I cannot say but there is an impression that among great judges could be included as one with Earl Warren of the USA, Lord Denning of Britain and myself from India as three great judges of the modern world.  Please exclude me from the three.  Whether there is even an iota of truth in it in this flattering statement, my progressive performance can be judged from the judgments of mine which have been published in a book by Oxford University Press named ‘Speaking for the Bench’ and over 100 books I have written.”

Justice Krishna Iyer’s judgments fathom the scruples and coax to tread on the conduit of rectitude and solicitude. May he live long and continue to inspire. May his tribe increase, for “The mouth of the righteous man utters wisdom, and his tongue speaks what is just” (Psalm 37:30)