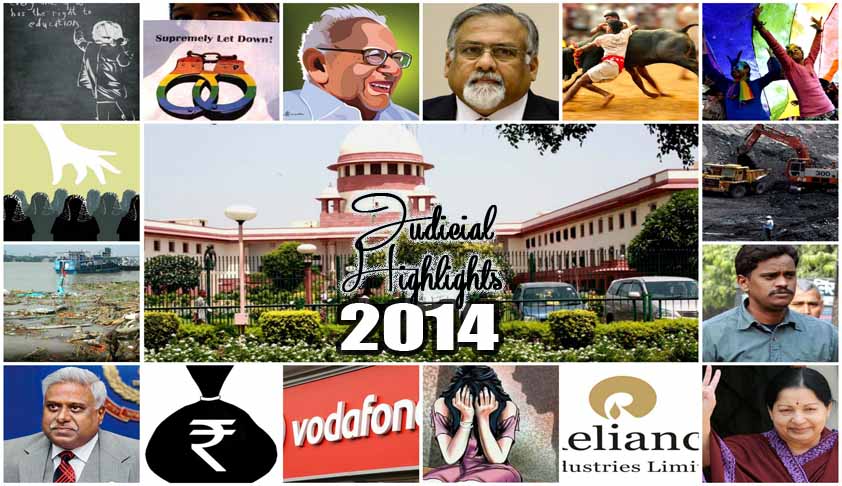 2014 has been a year of change for India. The country witnessed 3 CJIs as the head of Judiciary, retirements and fresh appointments of judges, new team of law officers, change in the Central & State Governments, and a consequential undeclared war somewhere between these changes. The nation went through a transitional phase and the Constitutional courts played a very important role...

2014 has been a year of change for India. The country witnessed 3 CJIs as the head of Judiciary, retirements and fresh appointments of judges, new team of law officers, change in the Central & State Governments, and a consequential undeclared war somewhere between these changes. The nation went through a transitional phase and the Constitutional courts played a very important role in balancing the direct will and the indirect will. In this piece, we have tried to concise the important yearly judgments and orders for our beloved readers.

A total of 16 judgments were pronounced by a bench comprising of 5 judges of the Supreme Court dealing with different and interesting questions of law. In Dr. Subramanian Swamy’s case, Sec 6A of the Delhi Special police establishment Act, 1946 & Sec 26(c) of the CVC Act, 2003 were held to be ultra vires the Constitution holding that approval of the Central Government to conduct any inquiry or investigation into any offence alleged to have been committed under the PC Act, 1988 is not required. In Pramati Educational Trust’s case, Article 21 and the Right to education were discussed and 86th and 93rd Constitutional Amendments were held to be constitutionally valid. In Manoj Narula v Union of India, the court decided that judicial interference in deciding fitness and suitability of candidates having criminal antecedents to become ministers is not required, traced its intentions for good governance and left it to the wisdom of the Prime Minister being the captain of the ship to decide his crew members. In Mohd. Arif’s Case, a landmark judgment was delivered allowing the petitions seeking a compulsory oral hearing in review petitions filed by death row convicts by a bench of minimum 3 judges. However in the first of such hearings, the court refused to change the judgment in Surinder Koli’s petition. In Madras Bar Association’s case, the National Tax Tribunal as sought to be created by a 2005 legislation was held to be violative of the Constitution. In his very impressive arguments, Arvind Datar proved to the satisfaction of the court that such tribunalisation will lead to transfer of judicial power of courts in the hands of executive leaving judiciary handicapped eventually.

In a historic judgment, the SC declared all Coal Block Allocations by the government from 1993 onwards completely illegal, arbitrary and without application of mind. However, via para 157 a small question as to whether declaration of illegality amounts to automatic cancellation of blocks was kept open. After further hearing, the court recorded words of the Attorney General that the Government wants to go ahead and cancelled all allocations ordering re allocations. Subsequently, a lot of petitions were filed by corporate houses but the court refused to intervene any more. The Govt. has now come up with an ordinance for the same. Special judge Bharat Parashar was appointed to preside over the hearings and Senior Advocate Cheema was appointed as the Special Public Prosecutor.

After the 2 judge bench decision by Justice Singhvi holding Sec 377 of IPC constitutionally valid and a review petition being dismissed at the threshold by Justice Dattu, a curative petition was admitted by the then CJI Sathasivam with a battery of senior advocates appearing for the same. The matter is pending to be heard by a bench of 5 judges in an open court now.

Huge stir was created nation wide when the then Chief Minister of Tamil Nadu, Ms Jayalalitha was sent to jail by the trial court and the Madras High Court declined to grant bail to her. The matter knocked the doors of the CJI Dattu and conditional bail was granted to her. Later on allegations were thrown on CJI Dattu but he strongly refused such accusations of corruption against him.

In a first of its own kind, the Supreme Court took cognizance of complaint against a sitting High Court judge for sexual harassment and subsequent resignation by a District Judge and ordered probe by a committee of the High Court Chief Justice. Later on however, distrust was shown in the committee and a fresh committee is to be constituted thereafter to look into the matter. The case showed that even judges are not immune to the due process of law.

The NDA Govt came up with the proposal of scrapping the present collegiums system of appointment of judges in High Courts and Supreme Court by establishing a National Judicial Appointments Commission (NJAC). A lot of ink went through in various for and against debates nation wide. The bill was challenged in the Supreme Court which refused to pass any order but kept in pending considering it premature to register their opinion. The bill has so far been ratified by 15 states and in no time it’ll become a legislation.

A bench of 3 judges, presided by Justice Chauhan heard the gas pricing and cost recovery matters filed by Gurudas DasGupta against Reliance Industries Limited and the Union of India. Huge allegations were made and the matter was heard for 22 continuous days. However, mysteriously, Justice Chauhan retired without letting a judgment to be delivered and released it from part heard. Raising quite a few eyebrows, the matter still needs to be adjudicated properly. Regarding the arbitration clause as well, both Union and RIL are preferring a lot of dilatory tactics still to avoid proper disposal.

The petition filed by Ram Jethmalani in 2011 and the formation of SIT headed by Justice M B Shah reached another milestone as the court used a brickbat finally to force the government to release the names of foreign bank account holders to the court and SIT. A lot of excuses were made by the Attorney General Mukul Rohatgi but the determination of CJI Dattu lead to another step in identifying black money holders.

Prashant Bhushan filed applications before the 2G bench and the Coal bench seeking removal of the then CBI Director Ranjit Sinha from the investigations alleging that he met the accused at his residence. After due deliberation, the 2G bench removed him just before his retirement marking a black spot in his brilliant career. The role of Senior Advocate Vikas Singh also was criticized heavily as he appeared for Ranjit Sinha and in words of former CJI Lodha ‘tried to hijack the proceedings’.

The present Govt very clearly stated their agenda to clean Holy river Ganga as soon as possible. But the promise was forgotten soon afterwards. The concerned ministry headed by Uma Bharti did nothing substantial to solidify the claim. The Supreme Court fell very heavily on the Solicitor General for not acting as an officer of the court and the govt not able to come up with a plan to show their enthusiasm to clean Ganga.

The Sahara Sebi saga continued as a 2 judge bench sent Mr. Subroto Roy Sahara and 2 other directors of the sahara group to jail for not complying with the court’s orders. Sahara engaged a lot of senior counsel but no relief was granted at all. The matter also lead to verbal exchange of heated arguments between the counsel especially Dr. Rajeev Dhawan and the bench. Till date the contemnors are in jail and nothing substantial has been  proved to the satisfaction of the court that the group is ready and willing to pay the amount of 10,000 crores for bail.

The Bombay High Court is currently dealing with a dispute between India’s leading law firm namely Amarchand Mangaldas & Suresh & Shroff & Co. for division. The matter has been referred to mediation and is pending to be resolved.

Justice Radhakrishnan, also awarded as the PETA man of the year, in a landmark judgment banned the Jallikattu tradition from Tamil Nadu celebrated during Pongal in which Bulls were included causing a lot of chaos and injuries. This judgment in one of its kind showed that the Judiciary is determined to protect rights and nothing is more important than upholding the rule of law in the country, including age old religious practices.

Justice Radhakrishnan in another judgment gave rights to transgenders giving them equal status and prohibiting any discrimination based on gender/sex as it would be constitutionally impermissible.

In the first of its kind, a division bench of the Bombay High Court held that issuing of shares from one indian subsidiary to the holding company in an international transaction between associated enterprises is not taxable in India in absence of a charging section. Emphasis was laid on chapter 10 of the Income Tax Act.

2014 takes within itself on one hand rise in number of judgments, increase in judicial activism & dedication of judiciary towards upholding the rule of law. But at the same time, this year also marked an increase in exchange of heated arguments between advocates and judges, allegations on members of judiciary, silent share of aggression between the ruling establishment and judiciary and the last years for former Attorney General G E Vahanvati and Justice Krishna Iyer. We look forward to 2015 for exciting judicial and constitutional adventures ahead.