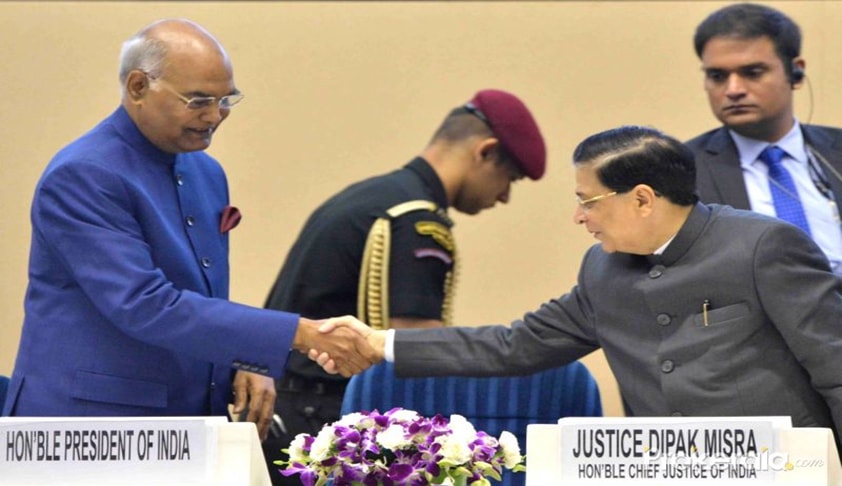 Defending the judiciary’s role guaranteed under the Constitution, Chief Justice of India Dipak Misra on Saturday said the judiciary does not intend to enter into the policy-making areas, but interprets the policies made by executive.

The CJI also said the court is obliged to stand by the citizens, if their fundamental rights are encroached by any of the government entities while terming the protection of fundamental rights of citizens as “sancrosanct duty” of judiciary.

Speaking at the inaugural function of the two-day long national Law Day celebration, organised by the Law Commission of India and NITI Aayog, he said it is only the Constitution which brings the three of them together.

Referring to Dr. Ambedkar’s quote about the separation of powers of the three organs, Justice Misra said: "Nobody intends, nobody desires to enter upon the policy making areas. We don't make policies but we interpret policies and that's our duty." Clarifying judicial activism, he said: “Citizens have been guaranteed with fundamental rights and governing entities are not allowed to encroach upon it. The moment, they encroach or if there is apprehension, the judiciary rises to stand by them.”

He cited the Vishakha judgment in which the women’s rights were protected by the court. Similarly for protection of children’s rights, the court has passed several orders.

Once again defending that the judiciary’s function, the CJI said judiciary plays a crucial role in the ambit of constitutional governance. The executive should also do its responsibilities within its respective sphere for the socio-economic growth.

He hoped that the three organs of the state to show cooperation with each other and respect Constitutional values, morals, philosophy so that the country thrives.

He expressed concern over the low representation of people from SC/ST and OBC in the judicial appointments and sought judiciary to take steps to address these issues.

Speaking on speedy justice system, the President said India has expensive legal system which makes the poor deprived of from getting justice. In addition, the repeated adjournments need to be avoided.

“Pro bono service to the poor should not be left at the will of lawyers, but the same should be institutionalized. The information and technology should be fully utilized by the judiciary so that the delay can be avoided. This will not only decongest the books, but also enhance the governance,” he said.