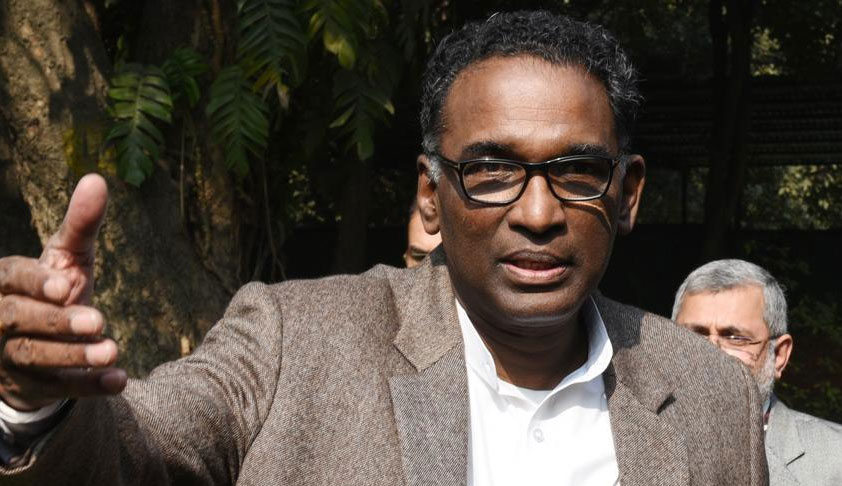 In a letter addressed to Chief Justice of India Dipak Misra and marked to all sitting Judges of the Supreme Court, Justice J. Chelameswar has made some scathing remarks against Chief Justice of the Karnataka High Court, Justice Dinesh Maheshwari, who initiated an inquiry against a senior District and Sessions Court Judge at the behest of the Ministry of Law and Justice.In his letter dated...

In a letter addressed to Chief Justice of India Dipak Misra and marked to all sitting Judges of the Supreme Court, Justice J. Chelameswar has made some scathing remarks against Chief Justice of the Karnataka High Court, Justice Dinesh Maheshwari, who initiated an inquiry against a senior District and Sessions Court Judge at the behest of the Ministry of Law and Justice.

In his letter dated 21 March, Justice Chelameswar has also called for a full court on the judicial side to discuss the matter of government interference in appointment of Judges to High Courts.

HC Chief Justice doing "executive bidding behind our back"

Justice Chelameswar penned the letter in view of the inquiry initiated against Judge P. Krishna Bhat, who had been recommended for elevation by the Supreme Court collegium. While the Centre has stalled Judge Bhat's elevation, it has given a green signal to the others who were recommended to be elevated along with him.

This was in view of a complaint filed against Judge Bhat by a female judicial officer who had accused him of “atrocities and abuse of power”. In view of this, the then Chief Justice of India T.S. Thakur had directed Justice Maheshwari’s predecessor, Justice Subhro Kamal Mukherjee, to hold an inquiry.

Justice Mukherjee had then absolved Judge Bhat of the allegations, asserting that the woman's complaints were aimed at maligning him and stalling his appointment as a High Court Judge. Centre has, however, nevertheless stalled his elevation, and communicated the need for an inquiry to the Chief Justice of the High Court instead.

In light of these circumstances, Justice Chelameswar's letter questioned the impact of Justice Maheshwari's actions on the independence of the judiciary, saying,

"We, the judges of the Supreme Court of India, are being accused of ceding our independence and our institutional integrity to the Executive’s incremental encroachment. The Executive is always impatient, and brooks no disobedience even of the judiciary if it can. Attempts were always made to treat the Chief Justices as the Departmental Heads in the Secretariat. So much for our “independence and preeminence” as a distinct State organ.

Someone from Bangalore has already beaten us in the race to the bottom. The Chief Justice of the Karnataka High Court has been more than willing to do the Executive bidding, behind our back."

Referring to re-opening of the inquiry against Judge Bhat, Justice Chelameswar asserted that if such retaliatory complaints, as those made by the female Judge, are entertained, "no career conscious judge would ever risk disciplining his subordinates".

He went on to express his anguish with the way Chief Justice Maheshwari established himself to be "more loyal than the King" and acted upon the communication received from the Ministry of Law and Justice.

Centre's interference in appointment of Judges to High Courts

In his letter, Justice Chelameswar also pointed out that if the Centre had any reservations about Judge Bhat's candidature for elevation, it could have sent back the recommendation for the Collegium's reconsideration, instead of writing to the High Court. Expressing his displeasure with the Centre's actions, he wrote,

"For some time, our unhappy experience has been that the Government’s accepting our recommendations is an exception and sitting on them is the norm. “Inconvenient” but able judges or judges to be are being bypassed through this route.

I do not think any of us disputes that elevating a person to be a judge of a High Court is a constitutional concern involving two authorities: the Supreme Court and the executive. The role of High Court ceases with its recommendation. Any correspondence, clarificatory or otherwise, has to be between these two authorities. To my mind, I could recollect no instance from the past of the executive bypassing the Supreme Court, more particularly while its recommendations are pending, and asking the High Court, as if it were an interdepartmental matter, to look into the allegations already falsified and conclusively rejected by us. Asking the High Court to reevaluate our recommendation in this matter has to be deemed improper and contumacious."

Condemning such practice of the Centre directly communicating with the High Courts, he asserted that "bonhomie" between the Judiciary and the Government "sounds the death knell to Democracy", and wrote,

"We only have to look forward to the time, which may not be far-off if not already here, when the executive directly communicates with the High Courts about the pending cases and what orders to be passed. We can be happy that much of our burden is taken away. And an Honorable Chief Justice like Dinesh Maheswari may perhaps be ever willing to do the executive bidding, because good relations with the other Branches is a proclaimed constitutional objective."

Thereafter, emphasizing on the Government and the Judiciary being "mutual watchdogs" rather than "mutual admirers", he called for a full court on the judicial side to discuss the issue.