Justice On Fire – Book Review Of Trial By Fire 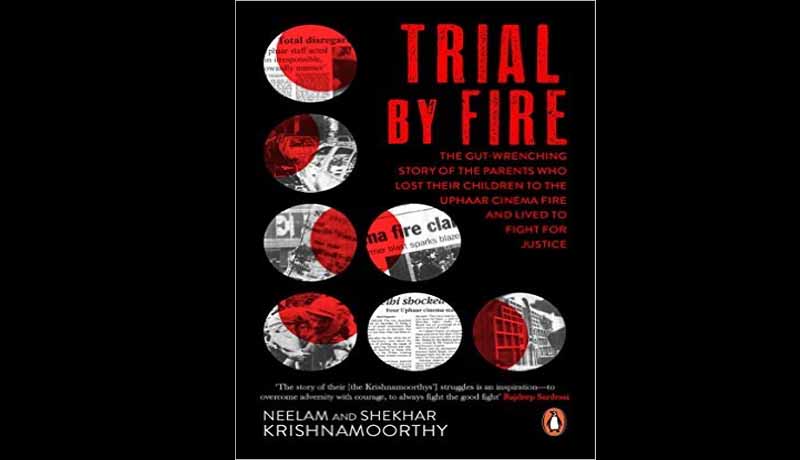 When the Supreme Court pronounced the sentence to Ansals in 2015 for Rs 30 Crore each in lieu of imprisonment, I had criticized the sentencing to be judge centric and unprincipled. I could not apprehend then, that one of the victimized family will author a book so heart melting showing that not only that particular order but the whole trial kept the victim families on fire throughout and...

When the Supreme Court pronounced the sentence to Ansals in 2015 for Rs 30 Crore each in lieu of imprisonment, I had criticized the sentencing to be judge centric and unprincipled. I could not apprehend then, that one of the victimized family will author a book so heart melting showing that not only that particular order but the whole trial kept the victim families on fire throughout and finally fired justice in the end. The only ray of hope left for justice now is the pending review before the Supreme Court.

Authors; Neelam Krishnamoorthy and Shekhar Krishnamoorthy who lost their teenage children, Unnati and Ujjwal, in the Uphaar theatre tragedy narrate the whole incident with delicate details, refuse to take names and speak the bold truth. The Uphaar Cinema fire on 13.06.1997 led to loss of 59 lives and is a classic example of how the rich played around with our ductile judicial system for 19 years. The book notes that in the 19 years the authors fought for justice, India saw 4 elected governments, 17 Chief Justices and 4 Prime Ministers, none of whom helped the cause of delivering efficient justice to the families and punish the culprits proportionately. The book registers various ironies throughout, the first being that their deceased daughter was born after the couple had watched a movie in the same cinema theatre years ago and that the couple had to collect dead bodies of the children from the same hospital where they were born. It further notes that there is no word in English dictionary for parents who have lost their children. And the reader trembles to note that the bodies of the children had bruises on earlobes, neck and wrists to show that how cruel humanity could have turned during the fire, when the jewels children were wearing were brutally snatched away, may be after death!

The authors have noted details of the infrastructure of the building, how the fire generated, with whose mistake it happened, how it could have been avoided, who all suffered, who all ought to have been charged and under what section of law, how they prepared for the legal battle, how they formed an Association to fight for justice, how the authors had to learn various provisions of law, how they attended the hearings, the various problems they faced during numerous hearings, how they had to cope up with falling health, how in memory of the deceased the members of the association created Smriti Upavan, how only selective action was taken, how arrests were evaded, how trial was delayed, how special treatment was given to Ansals even in the courtroom, how the judiciary failed the victims, how the fancy figure of 60 Crore came into picture and finally how the families stood the trial by fire and witnessed the justice on fire.

George Orwell wrote very aptly in Animal Farm – “all men are equal but some men are more equal than the others.” The Uphaar Cinema tragedy and the journey of the authors seeking justice is a poster example of what Viktor Frakl termed as ‘tragic optimism’ which says that one can remain optimistic inspite of tragic experiences. Trial By Fire is the narrative of the authors, who inspite of numerous falls, got up every time, dusted and marched with even more vigour. In the classic case of R v Sussex Justices, Ex Parte McCarthy (1923), Chief Justice Hewart wrote – “It is not only merely of some importance but is of fundamental importance that justice should not only be done, but should manifestly and undoubtedly be seen to be done.” In this case, however, at least justice didn’t seem to be done. The judiciary should have recollected at every step, what Thomas Fuller said very passionately – “Be you ever so high, the law is above you.” In the review petition perhaps, justice may seem to be done and the rich may be told they are beneath law. Kudos to the authors. Fingers crossed!