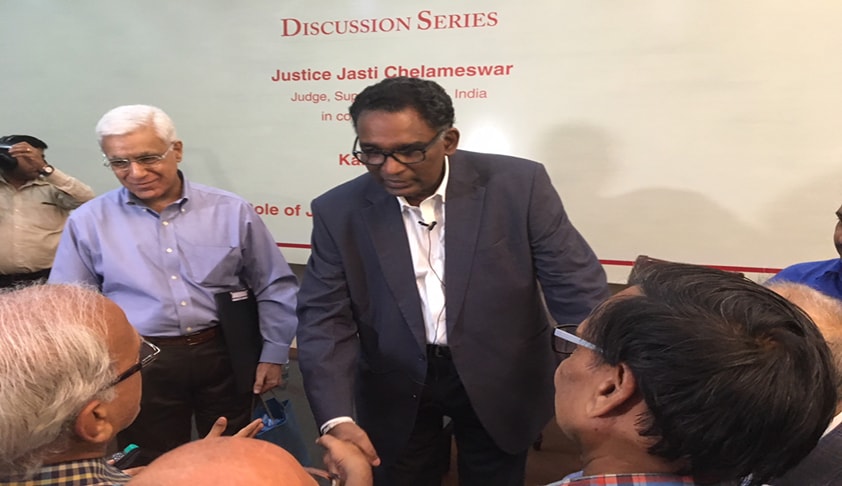 The Harvard Club of India hosted an event on Saturday at the Constitution Club of India, New Delhi, with acclaimed journalist Mr. Karan Thapar interviewing Supreme Court Justice J. Chelameswar on the ‘Role of Judiciary in a Democracy’.  As the interview progressed, it was clear that it was the sub-text, that is, the January 12 press conference by the four senior Judges of the Supreme Court, and its aftermath, that would dominate their discussion.  While much has been reported about their conversation, it was the silences of Justice Chelameswar to some questions, which Karan Thapar found eloquent.   As Karan Thapar remarked: “ It is the silences, the hoong...hoong of Justice Chelameswar that would leave the lasting imprint of this hour-long conversation”.

Here are the key takeaways from the discussion-

Thapar- “Would you agree that the Supreme Court made a serious error in striking down the NJAC?”

Justice Chelameswar- “...I do not consider the judgments of the Supreme Court to be synonymous with the constitutional truth...My judgments speak for themselves.  The answer to your question can be found in my judgment.”

Thapar- “Can I interpret this to be in respect of the majority judgment of the Supreme Court striking down the NJAC?”

Thapar: Union Law Minister Ravi Shankar Prasad had, in an interview to the Hindustan Times dated February 24, 2017, spoke about the need to audit the present collegium system post the experience in Justice Karnan’s case.

Justice Chelameswar: No system is perfect and there is always scope for improvement and hence, the necessity of auditing the system.

Relying on the letter of November, 2017 addressed to the Chief Justice of India, which was made public by Justices Chelameswar, Ranjan Gogoi, Madan B. Lokur and Kurian Joseph at the January 12 press conference,  Thapar asked: “the collegium had finalised and sent the Memorandum of Procedure (MoP) to the government in March, 2016...the Law Minister in his interview had mentioned that the government was desirous of a screening committee to select the candidates before the collegium makes recommendations and also, the criteria on the basis of which the recommendations are made...but on January 12, you had said that the government has not responded to the MoP as finalised by the collegium...were the other four members of the collegium kept in the dark as to the response of the government? Is it not strange that the CJI kept the response of the government from the second senior-most judge of the Supreme Court?”

Justice Chelameswar- “The choice of words is yours (laughter)...hoong, followed by a spell of silence lasting for a minute.

Thapar: Should not the Collegium reiterate the recommendation to elevate Chief Justice of Uttarakhand High Court, Justice K.M.Joseph and the senior advocate, Indu Malhotra, as the Centre has not taken further steps following the earlier recommendation?

Justice Chelameswar: hoong.  Silence, with a body language suggesting that the Collegium members are helpless.

Thapar: Are you reluctant to reply to this because it would embarrass the CJI.

Justice Chelameswar:  No.  It is more an embarrassment to myself.

Thereupon, Thapar read from the collegium resolution published on the Supreme Court website wherein it had been observed that Chief Justice Joseph is worthier than the Chief Justices and senior judges of most other High Courts. “Does this not imply tremendous support for Chief Justice Joseph?”, he inquired.

In respect of Justice Chelameswar’s reaction thereto, Thapar remarked, “You are very articulate with your smile and your ‘hmmm’s...”

Thapar- “would you say the collegium is presently in a dysfunctional state?”

Justice Chelameswar- “we have just made recommendations just two days back...if the collegium was dysfunctional, would that have been possible?...we may have had differences, it does not mean we don’t see eye to eye.  None of us are fighting over private property...”

In the context of the order of Justices Adarsh Kumar Goel and U. U. Lalit issuing notice to the Centre on a petition which brought to its notice the delay in finalizing the memorandum of procedure for appointment of judges to the Supreme Court and High Courts, Justice Chelameswar remarked, “The Division bench had rightly identified the problem...but the question is if the problem should have been dealt with by the division bench or the collegium...”

Justice Chelameswar- “I am still struggling to understand what had required the reversal of the order passed by a bench presided over by myself (for the setting up of a constitution bench of the five senior most judges of the Supreme Court)...I had not picked up the matter for myself to decide...the petition was mentioned before me, being the second seniormost judge, on a day when the CJI was presiding over a constitution bench...”

*Continuing in the same thread, Justice Chelameswar cited the instance elaborated by eminent jurist and renowned Senior Counsel Fali S. Nariman in his autobiography ‘Before Memory Fades’, when, upon the proclamation of emergency in 1975, to decide on the power of High Courts under Article 226 to examine if orders of preventive detention were in accordance with the Maintenance of Internal Security Act, by the intervention of the then Attorney General C. K. Daphtary, the then CJI A. N. Ray had constituted a bench of the five seniormost judges of the Supreme Court.

Assignment of matters to benches of preference

Mr. Thapar- “would you give any example of cases which have been allocated to selective, preferential benches?”

When Justice Chelameswar did not mention any particular matter, Mr. Thapar asked if he could suggest a case- “how about the Jayalalithaa case?”

Refusing to venture into the controversy regarding the allocation, Justice Chelameswar remarked, “the judgment (in the Jayalalithaa case) was reserved for a year...the question is what purpose did that assessment serve?”

Thapar- “the assignment of the judge Loya matter to a bench headed by Justice Arun Mishra was said to have triggered the January 12 press conference...”

Justice Chelameswar- “we never said that such assignment was appropriate or inappropriate...we were only concerned about the power as the master of the roster to be exercised for the public good and not arbitrarily merely because one has that power...”

Thapar referred the recent petition instituted by Senior Counsel and Former Law Minister Shanti Bhushan in the same respect , inquiring, “Is the purpose of assignment of certain matters to preferred benches to procure the verdict that is desired?”

Refusing to comment on Bhushan’s petition, Justice Chelameswar responded, “the concern is regarding sustaining the faith of the people in the judiciary...what is the basis for assigning these sensitive matters?”

Continuing, when  Thapar asked if the objective behind selecting benches of preference is to benefit the Executive, Justice Chelameswar replied that he would refrain from answering the question. “Silence can be interpreted in many ways”, noted  Thapar.

“Is the purpose of assigning important cases to comparatively junior judges is that they are deemed to be more pliant?”, pressed Thapar. Refuting the contention regarding pliancy, as he did not believe in the hierarchy of Judges for deciding cases,  Justice Chelameswar reiterated the concern regarding the integrity of the institution.

Thapar- “the CJI has begun publishing the resolutions of the collegium post your intervention, but all PILs, as well as appeals from the judgments of High Courts on PILs, are being listed before the bench presided by himself...”

Justice Chelameswar- “he is the master of the roster; if the CJI wishes to handle most cases, he is entitled to...”, adding on a humorous note, “I am happy to do minimum work over the next few days (until his retirement on June 22)”.

Thapar- “None of the four senior-most judges of the Supreme Court who also participated in the January 12 press conference are handling any important cases such as the Ayodhya matter, the Aadhaar matter or the Land Acquisition matter...would you say you are being kept out of significant cases?”

Justice Chelameswar- “the importance of a judge is not based on the nature of cases he adjudicates...I am more concerned about my contributions...”  It is here Justice Chelameswar made his insightful philosophical remark: “Great things can be done in a small way while small things can be done in a great manner”.  How this remark can be deciphered in the current controversy is anybody’s guess.

Thapar- do we have sufficient grounds for impeachment of the CJI?

Justice Chelameswar- I don’t know why everyone is obsessed with his impeachment...we wrote the judgment in Justice Karnan’s case but impeachment is not the answer to everything...we need to correct the system...there have to be other means of putting the system in order (in the context of cases of judicial misconduct)

Justice Ranjan Gogoi’s elevation as the next CJI

Thapar- “ are you at all apprehensive that Justice Gogoi, co-author of the November 2017 letter and part of the January 12 press conference, may get superseded?

Justice Chelameswar- “I am not an astrologer...I hope it does not happen...if it does happen, it will only show that our concerns as expressed at the press conference are true”

On being inquired about Guideline 9 of the ‘Restatement of Values of Judicial Life’ on interviews by judges to the media, Justice Chelameswar remarked that the bar applies only to interviews on the judgments, and not otherwise.

The one remark which drew instant applause from the audience was Justice Chelameswar’s assertion that upon his retirement, he shall not seek employment under any government.

*Finally, on being prodded about his letter dated March 21 to the CJI for a full court discussion on the propriety of the communication by the Central government to the Karnataka High Court Chief Justice, in the light of the elevation to the High Court of District and Sessions Judge P. Krishna Bhat, to investigate old allegations levelled against him by a female judicial officer, Justice Chelameswar remarked, “judge P. Krishna Bhat’s candidature had been cleared by the collegium twice...if the Centre had any reservations about Judge Bhat’s elevation, the same should have been voiced before the Supreme Court, instead of writing to the High Court...”

His last observation that we have not changed much from the culture of medieval India, which thrived on sycophancy, left the audience with much to introspect.