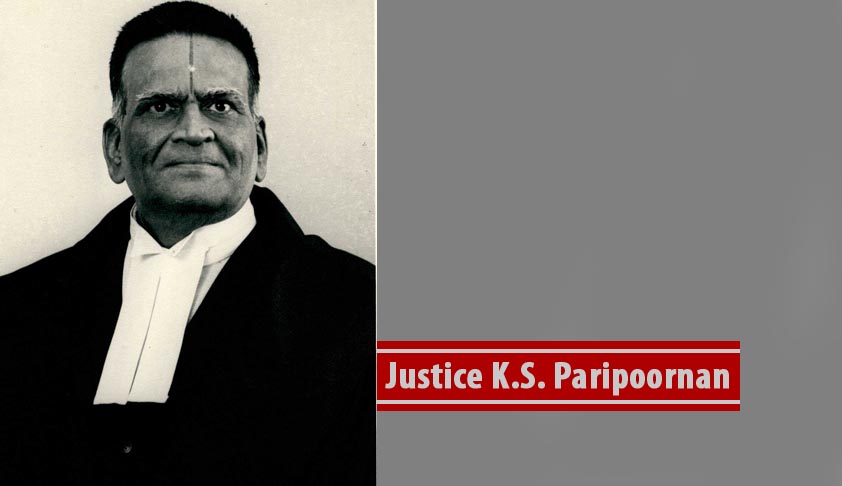 Our state has lost an eminent jurist on fiscal statues by the death of Justice K S Paripoornan. He is the guardian of courts. I remember an occasion where His Lordship, after retirement, has found that a division bench of the Kerala High Court has rendered a judgment without looking into the earlier Supreme Court judgment on the subject. He immediately called the junior judge of the said bench and told him. The judge has given an answer that the said decision was not brought to their notice. Justice Paripoornan immediately answered it saying that it (High Court) is an institution wherein justice is guaranteed. Litigants are approaching the Court not seeing at individual Advocate or Judge, but the institution wherein they are sure of getting justice. A judge dealing with a case is supposed to know “the law” on the subject. The law means the current legal position.

It is bench headed by Justice Paripoornan has opened the gate for public interest litigations in Devaswom matters. Court has held that it is the guardian of the deity. Apart from jurisdiction under Art.226 of the Constitution and S.92, C.P.C., High Court has got inherent jurisdiction not conferred by the Statute. While considering the corruption issues pertaining to Guruvayoor Devaswom Committee, Vigilance enquiry was orders and several other directions were issued. This litigation was  a turning point for the improvement and better administration of the Devaswo wherein the court observed:-

We are of the view that apart from the remedy available under S.92 of the Code of Civil Procedure and the initiation of proceedings under Art.226 of the Constitution of India, the Civil Courts have got 'inherent power' to initiate action, probe into the matter and set right the abuses by a remedial action in the case of charitable and religious trusts or deities as guardian of such juridical entities. This is a 'reserve power' vested in Courts to protect the interests of persons, who, by themselves, cannot initiate proceedings and safeguard their interests. We are inclined to take such a view.

As a Government Pleader for taxes he has briefed Sri.M.C.Setalvad, the then Attorney General. During discussions an important point was brought to his notice, which the MC has felt that not so important. But when the case was argued the Court was not inclined to admit the case. Finally the point raised by Sri. Paripoornan was argued and the Court immediately admitted stating that it is an important point. Sri Setalvad immediately stated in the open court that this point was invented by this young lawyer who came from Kerala, which is none other than Justice K S Paripoornan.

His Lordship Justice Paripoornan always directs the other judges to go in the right path. I remember an occasion wherein a Judge has taken leave to attend a wedding ceremony. Justice Paripoornan advised that Judges are not supposed to take leave for casual occasions like wedding, unless his presence is indispensable for the conducting of the ceremony.

His immense knowledge on taxation is reflected in many of his judgments on fiscal statutes. He is an eminent jurist, owner of great minds, guardian of temples and worshippers. In the court of Hon’ble Justice K.S.Paripoornan justice is guaranteed.