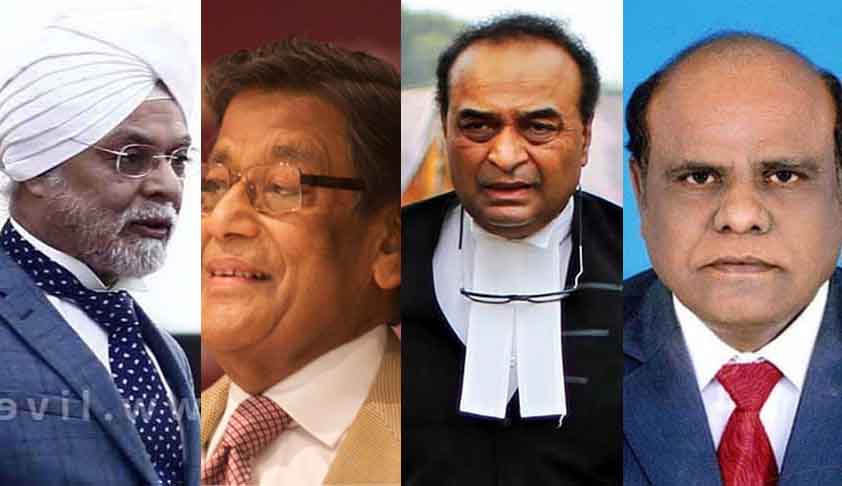 K K Venugopal urged Bench to allow Justice Karnan fade into retirement next month; AG demanded strong action saying all this was a calculated move and judiciary was becoming a laughing stock; After hearing Venugopal and AG, CJI Khehar said if he was found to be medically fit, he will have to face action for his contemptuous conduct “and proceedings will go on even if he retires” AG...

K K Venugopal urged Bench to allow Justice Karnan fade into retirement next month; AG demanded strong action saying all this was a calculated move and judiciary was becoming a laughing stock; After hearing Venugopal and AG, CJI Khehar said if he was found to be medically fit, he will have to face action for his contemptuous conduct “and proceedings will go on even if he retires”

AG Mukul Rohatgi: Your Lordships …as per the last order on March 31 had asked the contemnor to file his response. That has  not happened. He has not appeared also

CJI J S Khehar: Why will he appear ? He is sitting in Calcutta. The date of his summons to us was today. He is expecting us there today. We were wondering on  February 8 when we initiated proceedings by issuing notice we had said forwith no administrative or judicial order . There was a clear restrain order. This (refers to the order summoning the SC judges and direction to Air Control Authority to prevent the judges from flying abroad) orders are a clear breach of our direction. The present conduct is clearly contemptuous. Do we need to give him an opportunity to explain this? What he done earlier much different from what he done now. May be  he is not in a position to defend himself

AG: whatever he is doing, his press conferences, orders, the judiciary is becoming a laughing stock, the way he is ridiculing judges, calling the judges accused..

Senior counsel K K Venugopal:  Your lordship may not proceed with this contempt. My feeling is that he is not well. He may not be consciously violating the court’s orders. He is fortunately retiring in June. He may not be knowing the consequence of his action.

CJI Khehar: But anybody can play this trick with us. Say something and then feign to be ill.

KKV: What he requires is counselling. It is too late to start impeachment proceedings against him. As I said he is retiring in June. Let him.

CJI Khehar:  No. this court should not feel constrained to deal with such a situation. Cannot escape. We have to deal with this situation so that it cannot happen again. Retirement does not make the procedure Infructuous. It can go on.

AG: I disagree with the argument that he is not mentally fit. This is a calculated approach. He has been a judge all along passed hundreds of orders..tough action is called for. When somebody who administers law does something like this, the court should react more strongly.

CJI Khehar (dictates order) "While issuing notice against Justice C S Karnan on 8.2.2017 this court had directed that hw would forthwith be restrained from passing any administrative or judicial orders.He was directed to return all files to Registrar General of the High Court."

"Ever since initiation of proceedings Justice Karnan has been making press statements. After the last date of hearing on 31.3.2017 also he passed some judicial orders which has been received by this court.In order to ensure no court, tribunal or authority takes cognisance of orders passed by Justice Karnan, we restrain all courts tribunal authorities from acting on his orders".

"The press briefing and the orders issued by him indicate that he may not be in a position to defend himself. Therefore we consider in the fitness of matter that he may be medically examined by a medical board of a government hospital".