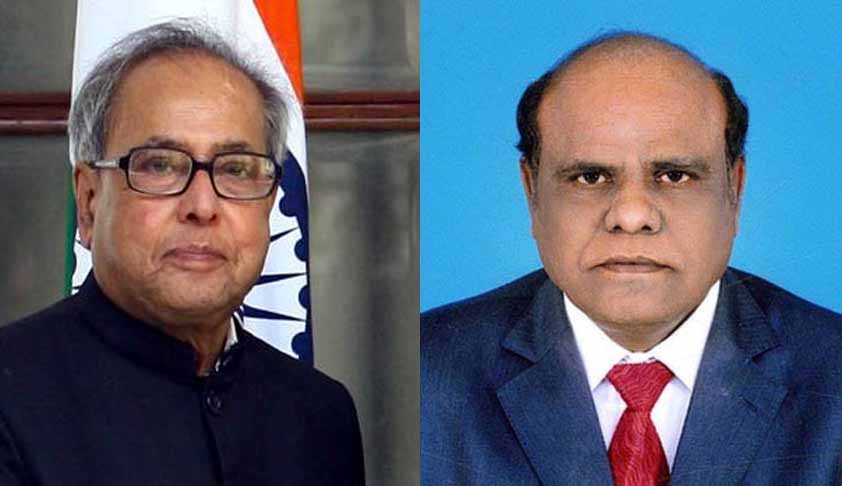 Justice Karnan shows no signs of relenting in his fight against the Supreme Court Judges, having petitioned President Pranab Mukherjee under Article 72 of the Constitution of India.

In the Petition filed under Article 72 of the Constitution of India, Justice Karnan demands suspension or stay of operation of the order passed by the 7 Judge Bench on 9 May, and thereby pleads, “The Petitioner is denied justice. The concept of justice is divine; it is his birth right and when justice is denied to him by the highest Court of the land, the only authority which the Petitioner could think of to seek justice is Your Excellency, the President of India, the symbol of “We, the People of India”, the sovereign.”

The Petition accuses the Supreme Court of assuming the power to remove a Judge of the High Court through recourse to the provisions of the Contempt of Courts Act, without discussion as to whether or not any such jurisdiction is vested in the Supreme Court.

It further brings to the notice of the President that over 30 AoRs were approached for representing Justice Karnan, but none of them has been forthcoming for the task. The Petition claims that this was because “they are scared of displeasing the Hon'ble CJI”.

He further claims to have been “confided in” by the AoRs, who told him that “AORs and the senior counsel practicing in the Supreme Court, unlike the ordinary lawyers who appear in the High Courts and subordinate Courts, do not enjoy the kind of freedom and independence which lawyers as a class, the sentinels of civil liberties and freedoms, ought to enjoy and profess to enjoy. They were too frank to admit that orders of the Supreme Court are extremely discretionary; that more than 80% of the petitions filed under Articles 136 and 32 of the Constitution, which constitute 95% of the work of the supreme Court, are absolutely discretionary and no AOR or a senior counsel could afford to invite the slightest of displeasure of the Hon'ble Judges.”

Justice Karnan further complains that the CJI was “not so kind” to Advocate Nedumpara, and had lost his temper on the Advocate’s plea to constitute an appropriate Bench for a Writ Petition challenging the Contempt of Courts Act.

Thereby, demanding that the order be stayed or suspended, Justice Karnan appeals, “The Petitioner’s case is no longer the case of an individual who has been convicted and sentenced to imprisonment without a chargesheet, without a trial, without even a judgment, but by a sentence where a reasoned judgment is yet to be delivered, but one concerning the very right of freedom of speech and expression, transparency and accountability in higher judiciary.”

You may read: A Peep into Justice Karnan’s Contempt Saga – I by Namit Saxena

You may also read: A Peep into Justice Karnan’s Contempt Saga – II by Namit Saxena