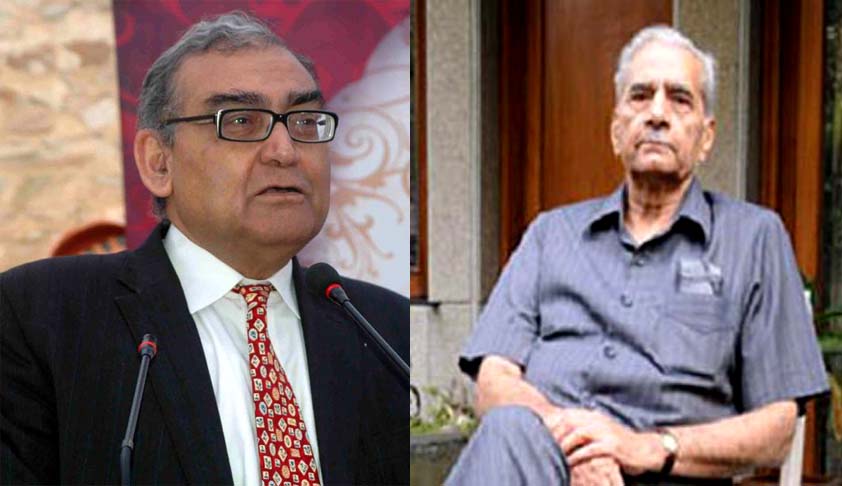 Justice Katju had recently wrote a letter  to Senior Advocate Shanti Bhushan requesting his “Committee on Judicial Accountability” (COJA) to conduct an investigation against CJI H L Dattu on account of corruption charges. Earlier, Justice Katju had sent Bhushan a dossier containing documentary proof of the large scale corruption by him. This dossier of about 100 pages included...

Justice Katju had recently wrote a letter  to Senior Advocate Shanti Bhushan requesting his “Committee on Judicial Accountability” (COJA) to conduct an investigation against CJI H L Dattu on account of corruption charges. Earlier, Justice Katju had sent Bhushan a dossier containing documentary proof of the large scale corruption by him. This dossier of about 100 pages included several photocopies of sale deeds by which Dattu and his family members illegally acquired a large number of properties in Bangalore. There were also photographs of a palatial house built by Dattu in Bangalore on 1200 sq.m. land sent by Justice Katju via email.

It is noteworthy that Shanti Bhushan and his son, Senior Advocate Prashant Bhushan are the founding members of COJA ( Committee on Judicial Accountability ). Justice Katju has urged them to call a meeting of COJA and undertake investigative steps into the allegations in the dossier. The email confirms the fact that the allegations were found serious by Bhushan himself.

“Prima facie it seems that Dattu has amassed a fortune, and he must explain ( 1 ) how he came across such wealth, ( 2 ) whether it is true that the Karnataka Land Reforms Act was flouted in these deals ( 3 ) whether the rules of the society in which some plots were purchased were flouted ( 4 ) why were several plots purchased in the name of Dattu's wife Gayathri showed her as daughter of Guravayoor, instead of wife of Justice Dattu, etc.,” wrote Justice Katju in the email.

The email also discloses how he had sent the dossier to then Union Law minister Mr. Ravi Shankar Prasad and there was no action taken by him. He emphasized that the  investigations should take place soon as much time has elapsed already.

But in a reply to Justice Katju, Shanti Bhushan wrote as follows;

" Yes indeed the allegations were serious. However, the documents did not fully make out the case. It is the policy of COJA ( Committee on Judicial Accountability ) to start some proceeding only when it has evidence which makes out a cast iron case. COJA does not havethe power of investigation. Only if the government is willing the matter can proceed further. It is only in cases of complete evidence of misconduct an attempt to get MPs sign an impeachment motion has any chance of success "

In response to Bhushan’s letter Justice Katju again requested to re-consider his request.

I request you to reconsider. The whole nation looks upto you as a crusader against corruption. Will you now, like Bheeshma Pitamah, close your eyes while Draupadi's ' cheer haran ' is being done ?

" Mrs. Dattu was working as a bank manager which fact has important consequences. Many other Judges had also been allotted plots in the same scheme. So for the scheme, Judges were being regarded as employees. So it would hardly be misconduct for accepting an allotment in these circumstances. Non disclosure of assets may not be a misconduct. Concealment of husband's name in sale deeds while being a suspicious circumstance may not be treated as proof of misconduct on the part of the husband "

Shanti Bhushanji,
You have raised 4 points in your latest email:
1. Mrs. Dattu was working as a bank Manager.
My response :  If that is so then the family income becomes even more. So clearly section 79A of the Karnataka Land Reforms Act, which prohibits a person whose family income is above Rs. 2 lacs from buying land, has been grossly violated.
Section 79A states :
" Section 79-A. Acquisition of land by certain persons prohibited. - (1) On and from the commencement of the the Karnataka Land Reforms (Amendment) Act, 1995, no person who or a family or a joint family which has an assured annual income of not less than 1[rupees two lakhs] from sources other than agricultural lands shall be entitled to acquire any land whether as land owner, landlord, tenant or mortgagee with possession or otherwise or partly in one capacity and partly in another "

2. Other Karnatak High Court Judges were also allotted plots in the scheme ( for providing plots to Karnataka High Court employees )
My response :This implies that if others did a wrong, Dattu can also do a wrong. So since many others are committing a theft or robbery, Dattu can also do so.

3. Non disclosure of assets may not be misconduct
My response : Dattu has not disclosed in his list of assets a palatial house, standing on 1200 sq.m. land, which may be worth Rs. 50 crore. I had sent you photographs of the house by email. Where did he get the money for buying/building this house, as well as acquiring the other assets belonging to him and his family  ?

4. Concealment of husband's name while being a suspicious circumstance, may not amount to misconduct
My response : Such concealment, coupled with the other illegalities and irregularities, clearly points to Dattu's guilt. Why should the father's name, and not the husband's, be mentioned in the numerous sale deeds ?