Justice Krishna Iyer: A Remarkable Blend Of Judicial And Humanistic Approach To Life And Its Problems 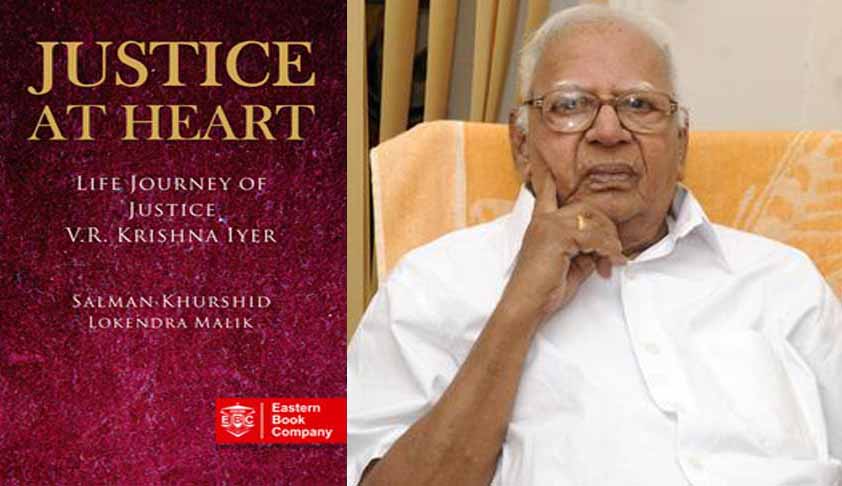 On December 5, we will be observing the second anniversary of the passing away of Justice V.R.Krishna Iyer. The two years since his passing away have seen an extraordinary interest in the contribution of Justice Iyer to Indian Supreme Court’s jurisprudence, and to the quality of India’s public discourse, after his retirement. Although his tenure in the Supreme Court lasted only for...

On December 5, we will be observing the second anniversary of the passing away of Justice V.R.Krishna Iyer. The two years since his passing away have seen an extraordinary interest in the contribution of Justice Iyer to Indian Supreme Court’s jurisprudence, and to the quality of India’s public discourse, after his retirement. Although his tenure in the Supreme Court lasted only for seven years, his influence on his successors in the Court, and on the nature of the Supreme Court’s approach to justice delivery, promises to last much longer than his entire life.

Justice Iyer’s biographers are likely to be fascinated by his appointment to the Supreme Court directly from the Law Commission, where he was first elevated from the Kerala High Court. Justice Iyer was also a unique Judge in the sense that he was the only one to have served a prison term after Independence, and as a Minister and a legislator in Kerala, before his elevation to the Supreme Court. In May 1948, Iyer was arrested for his alleged active help to Communists, in their violent activities, and providing hideouts for them, but as his arrest could not be justified, he was released, after spending a month in jail at Kannur. He utilised his prison experience for the improvement of the prison system in Kerala as a Minister and later throughout the country as a Judge of the Supreme Court. It was his contention that a man does not forfeit the guarantees enshrined in the Constitution when he enters into the prison.

No wonder, the Chief Justice of India, T.S.Thakur, at a recent lecture, remarked that such episodes in a candidate’s life would be considered negatively by the Collegium, entrusted with making recommendations for appointments to the Supreme Court.

It would be of interest to know that the then Chief Justice of India, Justice S.M.Sikri, whose tenure lasted from January 22, 1971 to April 25, 1973, did not recommend Justice Iyer for appointment. Those days, when the Collegium had not come into existence, the Government of the day respected the CJI’s advice, and gave it due consideration. Despite this, the then Union Minister, Mohan Kumaramangalam, pushed Justice Iyer’s candidature, and ensured his elevation to the Supreme Court, from the Law Commission, where he was nominated as a Member earlier. Eventually, Justice Iyer was appointed after Justice Sikri was succeeded by Justice A.N.Ray.

The book, “Justice At Heart: Life Journey of Justice V.R.Krishna Iyer”, [Eastern Book Company, Lucknow, Rs. 995] authored by former union minister and eminent advocate, Salman Khurshid and advocate, Lokendra Malik, provides the reader several anecdotes in Justice Iyer’s long career, starting from his early life, through his judicial career, to his extra-judicial reflections on varied subjects, after his retirement from the Supreme Court.

The book’s chapter on his matrimonial life is fascinating. His wife, Sarada’s death in 1974 was an irreparable loss to him. But he faced that difficult time silently accepting the hard core truth of death. The authors mention that she persuaded him to deliver his separate judgment in the Samsher Singh case that became a landmark.

Sarada Iyer, the book reveals, was a political science student who knew the rudiments of Indian constitutional law. She had casually glanced at the draft judgment of Krishna Iyer in the Samsher Singh case, before the couple went to the U.S. for her heart surgery. In the U.S., a special messenger came from the Indian Embassy in Washington D.C. with a copy of the draft judgment prepared by Chief Justice A.N.Ray. The Chief asked Justice Iyer either to sign in approval of his judgment or to produce at once a separate judgment if he had any. There was a sense of urgency in Chief’s note. Justice Iyer felt unhappy that Chief Justice could not wait till he returned from the U.S. As Sarada’s surgery was scheduled the next day, Justice Iyer had no choice, but to express his consent to the Chief Justice’ draft.

However, when Sarada came to know about this, she disagreed, and said his separate opinion, which she glanced through before their departure to the U.S. was a good piece, fine precedent and would be long remembered for its language and the law. It was Sarada who persuaded Justice Iyer to telephone Justice Bhagwati from the hospital to collect the draft of his judgment from his secretary and deliver it as his separate opinion.

The authors mention poignantly : “The next day, Sarada passed away as the surgery failed, but his judgment in the Samsher Singh case survived with an obituary touch”.

The book has an interesting Foreword by senior advocate, P.P.Rao, and has a selection of his letters and addresses. Extracts from nine of his landmark judgments are carried in a Part III of the book. His quotable quotes from judgments, published as a separate feature, illuminates the book.

Readers of the book have the freedom to benefit from it selectively. They could, for instance, focus on the chapter on Indira Gandhi’s election appeal case, which earned Justice Iyer, considerable appreciation for his “balancing feat”, from observers like P.P.Rao. Those who want to become familiar with his select judicial reflections, his judgment writing style, and his judicial views on as varied subjects like death sentence, police torture, prison reforms, gender justice, environmental justice and Muslim law, they can find insightful materials in Chapter 8.

His post-retirement extra-judicial reflections on varied subjects, gathered from his writings in newspapers and books, are available at one place in Chapter 10. As the authors observe, his post-retirement writings in The Hindu, for example, mirror a liberal, humane response to the issues of the time.

As the second anniversary of his departure from this world is near us, the book is sure to kindle our interest in his life and message so as to enhance our understanding of him and his times. The book’s lucid style is likely to be its inherent strength.