Justice Madan B. Lokur: The Epitome of Goodness 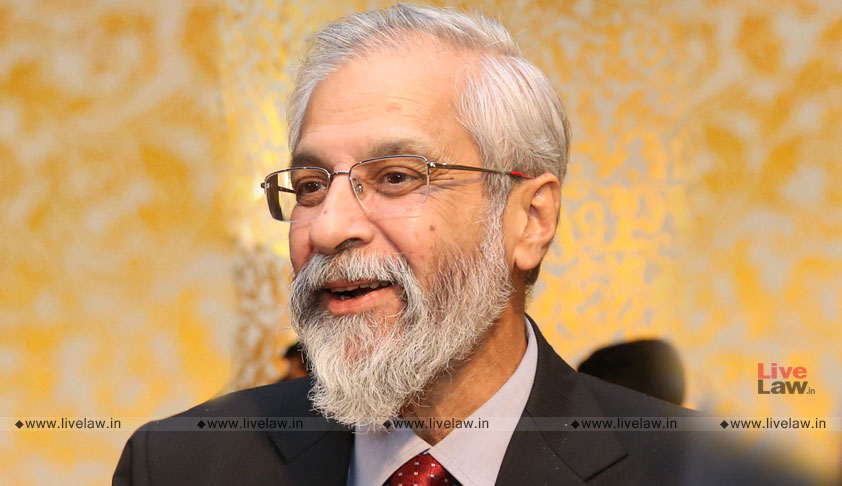 “Happiness can be found in the darkest of times if one only remembers to turn on the light,” these are the words of Prof. Albus Dumbledore from the Harry Potter series, words which resonate with the ideologies of Hon’ble Mr. Justice Madan B. Lokur. On the last day in office of the second senior-most judge of the Supreme Court, it is important to acknowledge the nation-wide impact of...

“Happiness can be found in the darkest of times if one only remembers to turn on the light,” these are the words of Prof. Albus Dumbledore from the Harry Potter series, words which resonate with the ideologies of Hon’ble Mr. Justice Madan B. Lokur. On the last day in office of the second senior-most judge of the Supreme Court, it is important to acknowledge the nation-wide impact of this magnanimous person, for it would be a shame if his relentless efforts of benevolence go unappreciated.

For someone from the 21st century, the comparison of Justice Lokur to Albus Dumbledore from the Harry Potter series would be obvious. The resemblance is uncanny; the long white beard and the spectacles. The nonchalance with which they both wear the weight bestowed on them by their office. The black gown draped gently on their shoulders symbolic of their responsibilities. Solving problems that impact the many with stroke of the magic wand, or gavel, as the case may be. Personalities that command respect from peers and the people around them. Affable nature and the commitment to teaching, garnering instant admiration and respect of the young. Much like Prof. Dumbledore, Justice Lokur is known to be a man of few, but very powerful words. Contrary to popular practice, he would avoid giving sermons on moral science and philosophy in Court and his judgments. Instead, his pointed questions are reflective of his attention to detail, sensitivity and concern and the impact of his final orders itself serve as a lesson.

Since 2015, Justice Lokur has been presiding over the Social Justice Bench that exclusively hears public interest cases primarily related to socio-economic cases. The concept of continuous mandamus has been reborn, strengthened and effectively utilized by the Social Justice Bench, presided over by Justice Lokur. This bench, during its time in existence in the Supreme Court, has exclusively been headed by Justice Lokur. Though it is true that the matters dealt by this bench demand a certain level of sensitivity and compassion, but contrary to popular belief, it is not the bench that brought benevolence to the decisions of Justice Lokur but his inherent magnanimity that translated into the orders he passed. Treading the thin line of separation of powers, Justice Lokur has on more than one occasion been accused of falling on the wrong side of that line. There are days when the people admire him for protecting the Aravalis, protecting the Taj Mahal and hauling up the industries for their large-scale pollution, there are also days where people question his legitimacy for getting rid of 10-year old diesel cars and sealing their business/residential premises. Volatile public opinion has never caused Justice Lokur to waiver. Instead, he has taken this criticism in good stride and always been steadfast in his resolve, working towards his final goal unstirred by the climate of opinion(s).

This final goal isn’t the one he has created for himself but is that utopian India that the Constitution envisages, a place where the State extends to every citizen their fundamental/human rights of survival – the right to food, shelter, health, dignity and livelihood. The Right to Food jurisprudence created by Justice Lokur through Swaraj Abhiyan v. Union of India has gained global recognition. He also ensured that States were hauled up for adulteration of the mid-day meals. He reminded the government(s) of their obligation to provide the vulnerable sections of society pensions, facilities such as health care and an old-age home for the aged and playgrounds, education and protection of children. He also ensured that the widows in Vridavan who have been historically ostracized, are given their pensions and self-sufficient means of livelihood. Recognizing the international impact of poor prison conditions in the country, Justice Lokur, in more than one writ petition, has championed the cause of prison reform and constituted a quasi-judicial Committee [headed by Justice Amitava Roy (Retd.)] to ensure that these issues are tackled in a systematic manner, with the combined efforts, resources and knowledge of the Ministry of Home Affairs, with those of the bar and the bench.

Just as Dumbledore walked through the halls of Hogwarts like a moral compass, reminding the students of what is expected of them; likewise, the whiff of the directions of Justice Lokur would pervade the corridors of the Supreme Court reminding the States of their responsibilities toward their citizens and admonishing them for their apathy—it happened when the State Governments chose to mis-utilise funds collected for the welfare of construction workers, and when the States, particularly those facing extreme winter, shunned their responsibility to provide housing for the homeless.

‘We are only as strong as we are united and as weak as we are divided’. It is not surprising to note that both Justice Lokur and Dumbledore have at more than one occasion reiterated this principle. These cases before the Social Justice Bench have been nursed and monitored with both compassion and strictness in the past 3 years of Justice Lokur’s term. One can only hope that this bench continues this mandate even after his retirement. For the times to come, if we all work towards Justice Lokur’s ‘final goal’ together, it can be through us that his legacy lives on! Justice Lokur’s compassion and commitment to fundamental rights is signaled through his decisions even beyond the Social Justice Bench. For instance, in iThought v. Union of India, Justice Lokur harmonized the IPC provision of the marital rape exemption (Exception 2 to Section 375) with the provisions of the Protection of Children from Sexual Offences Act, 2012 (POCSO Act) in order to safeguard the married girl child from the exemption of marital rape and provide her legal recourse in the penal code against such acts. He took it upon himself to monitor the investigation and rehabilitation of the children-victims of the mass rape in the Muzzafarpur shelter-home (2018) and of the exploitation of children in orphanages in Tamil Nadu (2007). His immense contribution in investigating the coal scam and the fake encounters in Manipur has been well documented. He has continued his hardline stance despite significant opposition from the government.

His immense contribution to the evolving jurisprudence of the country is not as well-known as his contribution to the administration of justice in the capacity of an administration genius. It is a lesser known fact that Justice Lokur, as the head of the E-Committee, single-handedly facilitated the National Judicial Data Grid (NJDG), in consultation with the Department of Justice for all district courts and most high courts. The NJDG is the publicly accessible warehouse for case data, including the orders/judgments, case status, progress of case, etc., which has been a game changer for the litigators, the judiciary and the policymakers alike, allowing all stakeholders to work towards an effective case management system. Other achievements of the committee include, inter alia, the e-court mobile app with push-and-pull SMS and e-mail mechanisms in place, the e-Pay facility for online payment of court fees and the e-Process service to track and curb delay in service of notice, affidavits, etc.  During his time as the Chairperson of the Supreme Court Legal Services Committee, Justice Lokur initiated Project SAHYOG which brought down the pendency of legal-aid cases down to zero in the Supreme Court and down by 40 percent pan-India. His efforts to improve training, accrediting the mediators with International courses and the popularization, encouragement and evolution as an effective dispute resolution mechanism have been ingenious. The One-Man Juvenile Justice Committee of the Supreme Court, as the name itself suggests, is a testament how Justice Lokur has independently transformed the juvenile justice system of the country, established, strengthened and reformed the statutory institutions under the Act, structured their functioning and created an internal, self-regulated checks and balance mechanism within the institutions.

Unfortunately, a large section of the public only knows Justice Lokur as one of the four judges in the unprecedented press conference. However, it can now be seen that in his six years in the Supreme Court, Justice Lokur has been a constant source of judicial and administrative innovations with his decisions and methods that have been efficient, altruistic and effective.

Indeed, such chronicling of Justice Lokur’s contribution and praise by his clerk may come across as biased. However, many stalwarts of the legal fraternity have similar things to say. Only last week at the Dadachanji Memorial Debate, the Attorney-General was pleased to laud Justice Lokur by saying that ‘I have great respect for Justice Lokur. I believe he has done the most for the people of this country through Public Interest Litigation, more than any other judge in the country’. J.K. Rowling has described her character Prof. Dumbledore as the ‘epitome of goodness’ and it is safe to say that one would not hesitate to identify Justice Lokur with such a title. What is commendable is his ability to translate his goodness into effective action(s) that have a far-reaching impact on the freedoms and liberties every child, elderly, widow and construction worker in the country. What is worrying today is not the lack of ‘goodness’ in the Supreme Court, but whether this goodness will be acted upon with the same level of commitment, compassion and selflessness.