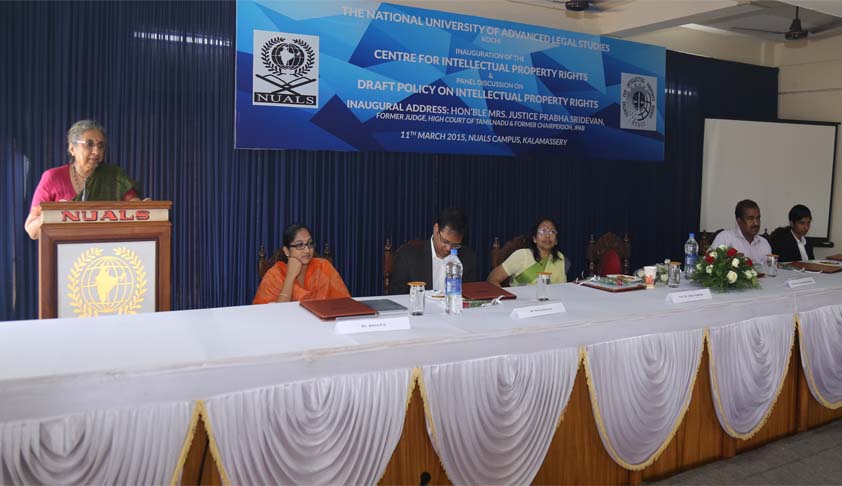 National University of Advanced Legal Studies (NUALS) formed the Centre for Intellectual Property Rights (CIPR) which was inaugurated by the former Judge of Madras High Court, Justice Shri Prabha Sridevan who has also been the former chairman of the Intellectual Property Appellate Board (IPAB).The welcome speech has been delivered by Mrs.Athira.P.S, Director of the Centre, followed by...

The welcome speech has been delivered by Mrs.Athira.P.S, Director of the Centre, followed by the Presidential Address delivered by Prof. (Dr.) Rose Varghese, Vice-Chancellor, NUALS. She emphasized the need to focus on research. She urged to make this Centre a research and mainstream documentation Facility. The inaugural address was delivered by Justice Prabha Sridevan. Justice Sridevan applauded the new initiative and deliberated the nuances and possibilities of Intellectual Property Rights (IPR) in India and asserted that India’s strength lies in its unique unpatented inventions.

A panel discussion on the ‘Draft National I.P.R Policy’ commissioned by the DIPP, Government of India was followed by the inauguration. Dr. V.R Jayadevan, Professor, NUALS moderated the discussion. Dr.T.G.Agitha, Associate Professor, IUCIPR, CUSAT, Swaraj Barooah, Editor-in-charge, Spicy IP and Raghul Sudheesh, Associate Editor, Bar & Bench were the panelists. The draft National IPR Policy prepared by the DIPP Think tank was subjected to criticism. Raghul Sudheesh, expressing his opinion on the issue stated that,” barring a few qualified personnel such as Justice Prabha Sridevan, the very constitution of the Think Tank, is open to criticism, as it contains people who are not qualified to be a part of such an expert panel, while leaving out much more experienced and erudite scholars in the field”.