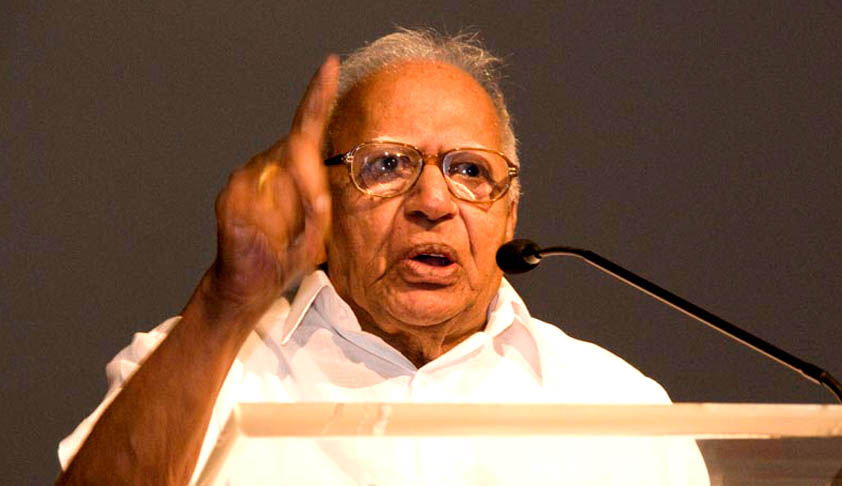 Concerned about the apparent inaction on the part of CJI, Justice VR Krishna Iyer has written to Chief Justice of India, urging him to take suitable action regarding the statements made by Senior Lawyer Dushyant Dave in his letter to CJI. Live Law has the copy of the letter, which reads as ""17/03/2014Dear Chief Justice Sathasivam,I have received a copy of the...

Concerned about the apparent inaction on the part of CJI, Justice VR Krishna Iyer has written to Chief Justice of India, urging him  to take suitable action regarding the statements made by Senior Lawyer Dushyant Dave in his letter  to CJI.

Live Law  has  the copy of the letter, which reads as "

I have received a copy of the letter from Advocate Dushant Dave where he had mentioned various statements concerning the great institution of the Supreme Court of India. You are its Chief Justice and the highest judicial authority in the country. Reading the letter as a whole and the issues specified by him I was outraged that particular judges could behave in bizarre ways. This is no secret but desiderates a public enquiry at your high level with appropriate action. Delay or indifference in these matters will bring disrepute to the sublime Supreme Court. I say no more at this stage except to request you to take speedy and suitable proceedings where the major concern will be the majesty of the Supreme Court and fearless fair and high level action that you feel deserves to be taken to protect the reputation of the High Bench of which you are the Chief Justice.

It was Live Law which broke the story  first  on 4th March . There is strong resentment among the members of the Bar for the perceived   inaction on the part of the Judiciary for not taking any corrective measures even after damaging reports appeared in the media.   Speaking to Live Law to Prashant Bhushan, remarked that 'the circumstances under which the order (permitting withdrawal) was made prima facie shows 'dishonest motive'. He said 'it was a blatant case of not just judicial impropriety, but also smacks of  'dishonest motive'.

It is also saddening to notice that many Senior members of the Bar who are very vocal on prime time Television Shows are expressly silent on the issue. The  Vice-President of Supreme Court Bar Association had told Livelaw that  SCBA would  be discussing this issue, but nothing has come out. The members of the Bar, who are socially active, demand the there should be action either way to protect  the majesty of law and  the Supreme Court as an Institution.

Mr. Dave wrote to the Chief Justice of India to take action in a case  involving grant of permission by a 2-judges Bench of the Supreme Court,  which passed an order to post Civil Appeal No. 9454-9455 of 2010 along with another unconnected SLP (Crl) No. 7232/2013 before it, and then permitted the appellant to withdraw the Writ Petition from the Mumbai High CoSurt itself, as a result of which the damaging observations of the High Court, where it found on merits that  the public property is given to a private party at grossly undervalued price had been completely erased. ( Please read the livelaw reports for complete facts and orders ). The members of the Bar point out that if  such order  by the Supreme Court is allowed to remain, it would create a highly improper precedent by which one can get a judgment set aside, by withdrawing  base writ petition or  suit as the case may be.

Mr. Dave refers to the above developments as 'extraordinary', and 'unparalleled, reflecting gross abuse of judicial power to cause damage to public running into an unspecified amount.'

Mr. Dave has flagged several issues of vital importance, some of which have been extracted below :

How did the Bench become aware of the Civil Appeal when that matter had never crossed its path?

Who could have informed the said bench about the Civil Appeals?

Whether the Registry could have at all tagged a Civil Appeal listed for hearing before Hon'ble Mr. Justice B.S. Chauhan without an order from that Bench?

Whether the Bench upon being pointed out on 25.02.2014 by Mr. C.U. Singh, Ld. Senior Advocate that the two matters were not connected in any manner and having accepted the submission, ought not to have sent back the Civil Appeals to the Bench before they were listed?

Should the Bench not have awaited the appearance by CIDCO, a statutory authority, especially when the matter involved land worth several hundred crores and strong judgment of the Bombay High Court?

Is the judgment and order pronounced on 25.02.2014 not illegal, coram non judice and violative of basic principles of exercise of judicial power and liable to recalled forthwith?

Should the Supreme Court not put in place fool proof Rules to ensure that the judicial abuse witnessed in allcocation, especially on mentioning to avoid forum shopping in interest of justice?

Should the Registry not be held accountable?"

Mr. Dave further continues : "there is a continuous and strong feeling amongst young members of the Bar that these kind of machinations are hurting their future and they are getting increasingly despondent. I feel that the institution owes a lot to them. The events reflect a disturbing trend witnessed in the Supreme Court over the last couple of years, and has seriously shaken the faith in the Institution in some of us who respect and love the Institution immensely."

Concluding his letter, Mr. Dave has made a fervent plea to the Chief Justice of India to "suo moto exercise the curative power" by the Supreme Court to remedy the "gross abuse of the process of the court" and "to act forthwith to restore the dignity of the Court and to prevent some of us from losing faith in the Institution completely."