Breaking: Justices Indira Banerjee, Vineet Saran and KM Joseph Sworn In As SC Judges; No Changes In Order Of Seniority 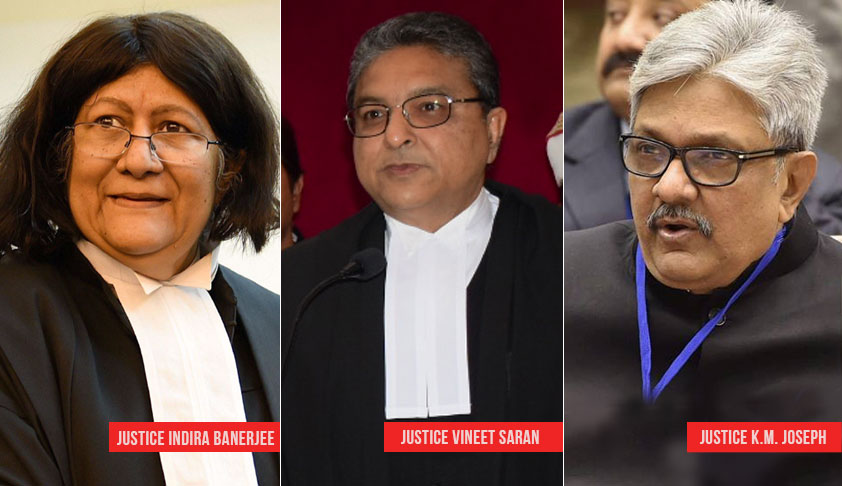 Three new judges— Justice Indira Banerjee, Justice Vineet Saran and Justice KM Joseph were sworn in today at 10:30 am in the Chief Justice’s Court, raising the total number of judges to 25, as against the sanctioned strength of 31 judges.

Justice Banerjee enrolled as an Advocate in July, 1985, and practiced extensively on the Original and Appellate Sides of Calcutta High Court. She was appointed as a Permanent Judge of the High Court in February, 2002, and was transferred to Delhi High Court in August, 2016. She was, thereafter, elevated as the Chief Justice of Madras High Court, a post of which she took charge in April, 2017.

Justice Joseph enrolled as an Advocate in January, 1982, and was appointed as a Permanent Judge of the Kerala High Court in October, 2004. He was then transferred to the Uttarakhand High Court and assumed charge as the Chief Justice in July, 2014.

As the Chief Justice, he pronounced a judgment quashing the President’s rule imposed in the State of Uttarakhand, and thus began a long wait for a transfer or an elevation. The Collegium had, in May, 2016, recommended his transfer from Uttarakhand High Court to the High Court of Andhra Pradesh & Telangana. However, there was no action on this recommendation.

Thereafter, last year in February, Justice Chelameswar had questioned Justice Joseph’s exclusion from the recommendations for elevation to the Apex Court. It was in January, 2018 that the collegium finally recommended him to be elevated to the Supreme Court.

The resolution signed by Chief Justice of India Dipak Misra, Justice J. Chelameswar, Justice Ranjan Gogoi, Justice M.B. Lokur and Justice Kurian Joseph had then stated that they found Justice K.M. Joseph to be “more deserving and suitable in all respects than other Chief Justices and senior Puisne Judges of High Courts for being appointed as Judges of the Supreme Court of India.”

Despite this, the Centre had rejected the recommendation. In its letter to the collegium, the Centre had pointed out that Justice Joseph is placed at serial number 42 in the All India High Court Judges’ Seniority List, with eleven Chief Justices of various High Courts currently senior to him. Besides, it had also sought to assert that the Apex Court has not had any representation from the Scheduled Castes and Scheduled Tribes for a while now.

His name was finally reiterated on July 16, along with Justice Banerjee and Justice Saran. The appointment notification however placed him after the two judges, making him junior to them. This had given rise to a seniority fiasco, with several senior Supreme Court judges meeting the CJI to discuss the issue.

The judges essentially asserted that since Justice Joseph was the first to be recommended by the Supreme Court collegium, his name should have been first in the appointment notification. In order to restore his seniority, they had requested the CJI to administer the oath to him first. The CJI had then agreed to discuss the matter with Attorney General of India K.K Venugopal.