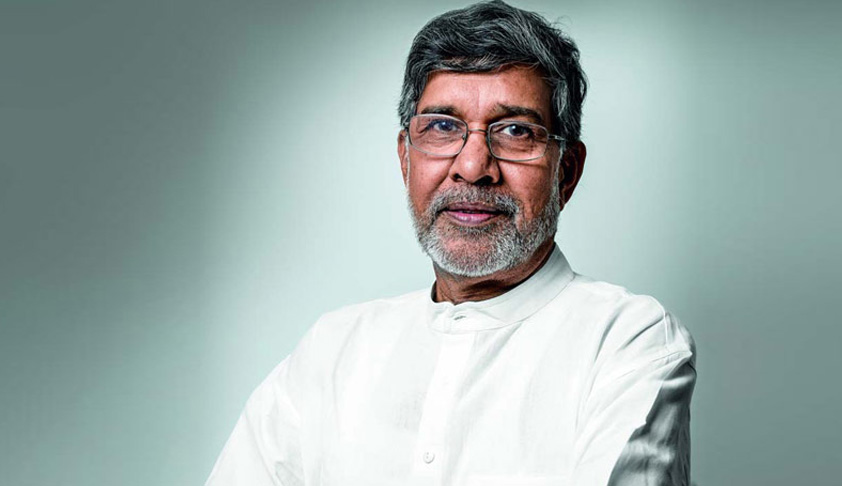 Kailash Satyarthi, the joint winner of this year’s Nobel Peace Prize, gleams with honesty when he says that “children are his religion”.  Satyarthi considers this a victory of not just a man, but the entire cause, the cause that he has been fighting for, with his heart and soul for more than 3 decades.The electrical engineer started off with teaching at a college in Bhopal,...

Kailash Satyarthi, the joint winner of this year’s Nobel Peace Prize, gleams with honesty when he says that “children are his religion”.  Satyarthi considers this a victory of not just a man, but the entire cause, the cause that he has been fighting for, with his heart and soul for more than 3 decades.

The electrical engineer started off with teaching at a college in Bhopal, after completing his studies in his hometown of

Vidisha in Madhya Pradesh. He decided to shift to New Delhi in 1977 and soon began working with a publisher of Arya Samaj literature. He also started a magazine, Sangharsh Jaari Rahega (the struggle will continue), where he doubled up as the owner and a photo-journalist.

In 1980, he began working with Bandhua Mukti Morcha (BLLF), an organization headed by Swami Agnivesh. Satyarthi however wanted to work exclusively for on child labor and this gave birth to Bachpan Bachao Andolan in 1980.

Child labour has been illegal in India since 1933 and the Constitution stipulates that no child below the age of 14 years shall be employed to work in any factory or mine or engage in any other hazardous employment. The Bonded Labour System (Abolition) Act, 1976, strictly outlaws all forms of debt bondage and forced labour.

A 2014 report by the FXB Center for Health and Human Rights at Harvard University, written by adjunct faculty member Siddharth Kara, documents over 3,200 cases across nine states in India and finds several hundred cases of forced, bonded labour, child labour, and trafficking in carpet factories run by exporters who ship these rugs to some of the biggest retail stores in the US.

Satyarthi first became popular for his sustained raid and rescue operations targeting carpet loom units. In 1993, he began a campaign to inform consumers how carpets were made using child labour. The campaign was initiated by European and Asian rights groups such as the Indo-German Export Promotion Project, representatives of the carpet industry, 200 NGOs under the SACCS and UNICEF India.

Within a few years of launching BBA, Satyarthi led the Global March against Child Labour, a worldwide coalition of civil society groups and trade unions from 125 countries. He was the chairperson of the South Asian Coalition on Child Servitude (SACCS), an active coalition of more than 200 NGOs working on child rights issues in various industries in India, Pakistan, Nepal, Bangladesh and Sri Lanka. The organization claimed that by 1996, it had rescued more than 34,000 children by conducting raids at carpet-manufacturing units.

A similar zeal to trace missing children led the BBA to file another PIL that resulted in Delhi High Court issuing a direction in 2010 that every time a missing child complaint comes to the police, it must register an FIR. In the same proceedings, HC further directed that in every such case a lawyer from legal aid would be assigned to the parent of the missing child.

Affidavits by BBA highlighting how over one lakh children go missing in India every year left the Supreme Court aghast in 2013, and it directed all states in the country to compulsorily register FIR whenever a case of a missing child is reported to the police. It also brought Children Homes being run across the country under its scanner, directing that they should be registered and properly maintained.

The police agencies have also installed a child tracking system to monitor the movement of minors hired by placement agencies.

In 2012 Bachpan Bachao Andolan filed a PIL in Supreme Court stating that over one lakh children were missing in country every year. The Supreme Court vide order dated 17.01.2013 passed the directions making it mandatory to register FIR whenever a case of a missing child is reported to the police. These directions were applicable to all States throughout India.

An executive order called the Delhi Private Placement Agencies (Regulation) Order, 2014 has been released in compliance with the order passed by the High Court of Delhi in December, 2010 and December, 2013 in the case of Bachpan Bachao Andolan v. Union of India and others. In the case, the Court had directed the Govt. of Delhi to issue executive directions for the regulation of Private Placement Agencies providing domestic workers in the National Capital Territory of Delhi and to prevent the exploitation of such domestic workers employed through such private placement agencies in Delhi. Read the judgment here.

The order applied to all Private Placement Agencies, providing domestic workers in Delhi whether their office/ place of business is situated within Delhi or outside. The order lays down their conditions of work and the mode of Placement. It also specifies that payments for the domestic worker will be through a Bank Account. It lays down mandatory registration of Placement agencies and imposes a fine of Rs 50,000 for non-registration of Placement Agencies. The order also delegates the adjudication powers to the Child Welfare Committee (CWC) and Delhi Commission for Women (DCW). Read the Live Law story here.

Bachpan Bachao Andolan had also filed a petition in 2006, in Supreme Court, highlighting serious violations and abuse of children who are forcefully detained in circuses, in many instances, without any access to their families under extreme inhuman conditions.

BBA had filed this petition following a series of incidents where it came in contact with many children who were trafficked into performing in circuses. It found that the activities that are undertaken in these circuses deprive the artists especially children of their basic fundamental rights. Most of them are trafficked from some poverty-stricken areas of Nepal as well as from backward districts of India.

There are no labour or any welfare laws, which protect the rights of these children. Children are frequently physically, emotionally and sexually abused in these places.

The most appalling aspect is that there is no direct legislation, which is vested with powers to deal with the problems of the children who are trafficked into these circuses. The Police, Labour Department or any other State Agency is not prepared to deal with the issue of trafficking of girls from Nepal holding them in bondage and unlawful confinement. There is perpetual sexual harassment, violation of the Juvenile Justice Act and all International treaties and Conventions related to Human Rights and Child Rights where India is a signatory.

The Supreme Court in this petition directed the Central Government to issue suitable notifications prohibiting the employment of children in circuses. Simultaneous raids were directed to be conducted to liberate the children and check the violation of fundamental rights of the children. The rescued children were directed to be kept in the Care and Protective Homes till they attain the age of 18 years. The Court also directed that a scheme of rehabilitation should be put in place. Read the judgment here.

In another petition before the Jharkhand High Court in 2011, BBA had contended absence of shelter homes in the State. In this petition as well, the Government was brought under the scanner and a future plan of action was demanded from the State. Details of amount received by the State from the Central Government were also asked. The Court also demanded details regarding Anti-human Trafficking units working in the State. Read the order here.

A stricter law against child trafficking is another focus area for Satyarthi. He is among a handful of child rights activists who have been instrumental in the ratification of the 1986 enactment of the Child Labour Act by the Indian Parliament and the 1999 ILO (International Labour Organization) Convention 182 on the elimination of the worst forms of child labour. The ILO Convention 182 was adopted after the Global March against Child Labour.

The sister concern of Bachpan Bachao Andolan named “Save the Childhood” filed a Petition in 2005 in Delhi High Court. The bench headed by the then Chief Justice A P Shah directed the Government to frame scheme to abolish Child Labour in Delhi.

The Court vide order dated 15.07.2009 adopted the scheme framed by Government and directed that 500 children should be rescued by the government every month. SC has asked Child Welfare Committees to periodically inspect Children Homes to ensure they have valid license and facilities. In its latest hearing, SC has demanded an affidavit from all state governments in this regard.

Vide an order in September, Supreme Court came down heavily on State Governments for their lack of action in cases of missing children. The Court also noted the states’ failure to appoint para-legal volunteer in shifts, in the police station to oversee the manner in which the complaints regarding missing children and other offences against children are investigated. Read the LiveLaw story here.

Satyarthi and his Bachpan Bachao Andolan’s legal struggle has indeed been a significant one. BBA’s PILs highlight genuine public interest, drawing the attention of the Supreme Court and the Delhi High Court towards prevailing child labor, regulating placement agencies and tracking children who go missing every day.

The win has also drawn global attention to the issue of child labor which is still greatly prevalent in the country which had declared it illegal in 1933. In the last one year, 82,101 children have gone missing across India. Over half of them, or 48,688 are from West Bengal while 17,758 are from Uttar Pradesh, according to government figures. Between 2009 and 2011, 236,014 children went missing, and of these, 75,808 remain untraced, according to National Crime Records Bureau data. It’s high time that the issue is dealt with a greater sense of responsibility and vigilance.