Karnan Judgment: Two Of The Seven Judges Call For Debate On Proper Selection Of Judges & Action Short Of Removal To Punish Erring Judges 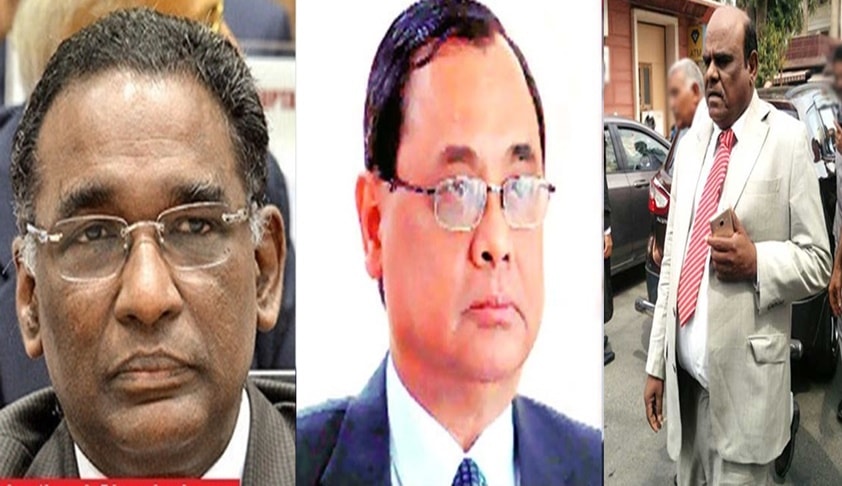 Supreme Court of India on Wednesday released the much awaited detailed Judgment of Seven Judge Bench  in Justice Karnan's contempt case. The Judges unanimously found him guilty for Contempt of Court and sentenced him for Six months imprisonment.

Justices J. Chelameswar and Ranjan Gogoi have, in their separate judgment, while agreeing with the other five Judges that Justice Karnan left no other choice to the bench,  but to convict and sentence him to imprisonment, introspected a bit over how the system has to led to his rise.

In Paragraph 26 of their judgments, the two Judges observed:

“This case, in our opinion, has importance extending beyond the immediate problem. This case highlights two things, (1) the need to revisit the process of selection and appointment of judges to the constitutional courts, for that matter any member of the judiciary at all levels; and (2) the need to set up appropriate legal regime to deal with situations where the conduct of a Judge of a constitutional court requires corrective measures - other than impeachment to be taken.”

“Obviously, there is a failure to make an assessment of the personality of the contemnor at the time of recommending his name for elevation. Our purpose is not to point fingers to individuals who were responsible for recommendation but only to highlight the system’s failure of not 72 providing an appropriate procedure for making such an assessment. What appropriate mechanism would be suitable for assessing the personality of the candidate who is being considered for appointment to be a member of a constitutional court is a matter which is to be identified after an appropriate debate by all the concerned – the Bar, the Bench, the State and Civil Society. But the need appears to be unquestionable.”

Interestingly, Justice Chelameswar chose to reveal on this occasion, something which everyone knew, but was reluctant to admit it publicly.  He wrote: “We are only sad to point out that apart from the embarrassment that this entire episode has caused to the Indian Judiciary, there are various other instances (mercifully which are less known to the public) of conduct of some of the members of the judiciary which certainly would cause some embarrassment to the system.”

“There can be deviations in the conduct of the holders of the offices of constitutional courts which do not strictly call for impeachment of the individual or such impeachment is not feasible. Surely there must be other ways of dealing with such cases. The text of the Constitution is silent in this regard. May be it is time for the nation to debate this issue.”