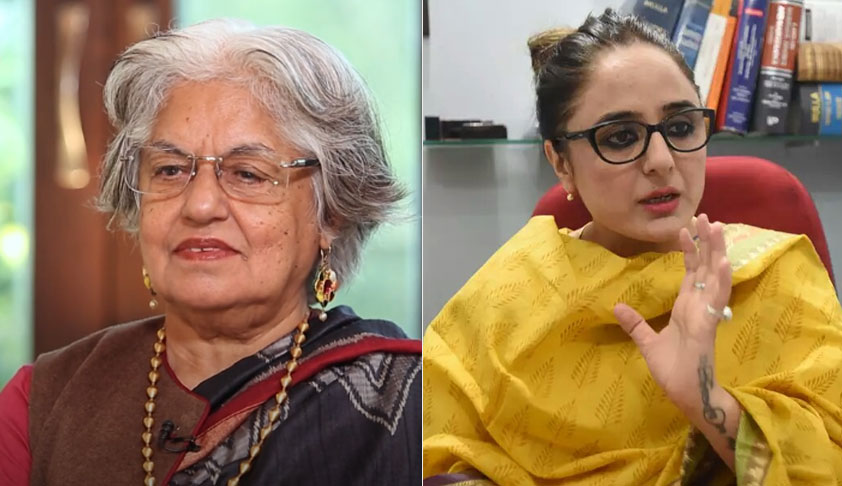 Supreme Court has issued notice to the state of Jammu and Kashmir on the writ petition filed on behalf of the Kathua gangrape and murder victim’s father, praying for the transfer of the trial proceedings outside of the state.The Bench of Chief Justice Dipak Misra, Justice D. Y. Chandrachud and Justice A. M. Khanwilkar has also ordered protection to victim's family members and...

Supreme Court has issued notice to the state of Jammu and Kashmir on the writ petition filed on behalf of the Kathua gangrape and murder victim’s father, praying for the transfer of the trial proceedings outside of the state.

At the commencement of the urgent hearing on Monday of the writ petition instituted by the biological father of the 8 year old victim of the Kathua rape and murder, Senior Counsel Indira Jaising, appearing on behalf of the petitioner, pressed the prayer for the transfer of the trial proceedings outside of the state of Jammu and Kashmir to the UT of Chandigarh, Punjab-

“Our only concern is that the atmosphere in the state is highly polarised and hence, not conducive to a fair trial...Your Lordships have already dealt with the issue of the local lawyers obstructing the filing of the charge sheet by the crime branch and attempting to restrain Advocate Deepika Singh Rajawat from representing the victim’s family before the local Magistrate...the police has complained that they could not file the charge sheet for hours...there have been attacks on the advocate (Ms. Rajawat), who herself has five year old daughter...she was asked to give up the case...Advocate Talib Hussain, who belongs to the same community (as the victim’s family) and is assisting the prosecution, has also faced attacks...hence, we have prayed that the trial may be shifted to Chandigarh in view of its proximity and the consequent ease of commutation...”

“We have joined only the state of J & K as the respondent in the petition as the burden of prosecution lies on the state...we wish to clarify that There is no grievance as to the nature or manner of investigation...in fact, in my entire career, this is one of the best police investigations that I have seen...all the DNA reports are on record...the accused have been duly identified...one chargesheet has already been filed, with an indication therein that further investigation in respect of other conspirators is still underway...”, she clarified that only the trial and not the investigation is not sought to be transferred.

When an Advocate sought the permission of the court to advance written submissions for the transfer of the investigation to an independent agency, Ms. Jaising urged vehemently, “this is not a PIL...this petition is on behalf of the father who alone is carrying the burden of his daughter’s death...when the police does a good job, it is our duty to say so loud and clear...attempts are being made to undo that investigation...there may be no transfer of the investigation to the CBI...since the investigation is still pending, considering the atmosphere prevailing in the state, the court may agree to monitor the probe...”

“Justice and the rule of law require that the investigation be transferred to an independent, central agency...please see a copy of the chargesheet (‘I have already annexed the same!’, exclaimed Ms. Jaising)...the intention of the state government is to create a rift [unclear]...”, advanced the said advocate. Another petitioner-in-person, having filed a PIL in the same behalf, sought to advance, “two police officials took rupees 1.5 lakhs...”

Pleading that the bench may not allow the former advocate to recite his submissions, Ms. Jaising advanced, “this petition has been filed by the direct biological father of the victim...we cannot venture into parentage of the 8 year old...there cannot be any victim blaming...”

“Primarily, the investigation has to be conducted by the local police...if there is evidence that the investigation is not proceeding correctly, only then may it be transferred to an independent agency...let us confine our focus to victim protection and fair trial”, observed Chief Justice Misra.

Refuting the aforesaid petitioner-in-person’s claims in respect of victimology and compensation, the Chief Justice remarked, “there has been an instance *where in an offence under the POCSO Act, we have granted an excess compensation of Rs. 10 lakhs...”

Standing Counsel for the state of J & K, Mr. Shoaib Alam, submitted, “the chargesheet has been filed and the magistrate has taken cognizance...in respect of the plea for transfer of the trial, Your Lordships may grant time until April 28 which is the next date of the hearing (before the Judicial Magistrate, Kathua)...the victim’s family has already been accorded protection of five personnel...as for the local advocate representing them, though there has been no written complaint, the state shall give her the protection she wants...”

Ms. Jaising acceded that the prayer for transfer of the trial may be considered after April 28.

The bench on Monday noted, “fair trial is inseparable to the right under Article 21...this case graphically requires protection of the victim and the lawyers who have the right to protect the interests of the victim in court...the interim protection to the victim’s family shall continue...protection shall also provided to the local lawyers (Ms. Rajawat and Mr. Hussain) and their family members...we do not wish to enter into the sphere of transfer of investigation...Mr. Shoaib Alam shall file the state’s reply on the plea for the transfer of the trial...”

At the request of Ms. Jaising, the bench added that the security so provides shall be in plain clothes.  The bench also granted the prayer that the security at the Juvenile Home where the alleged Juvenile Accused is lodged at present is strengthened, in accordance with the spirit of the Juvenile Justice Act of 2015, and to ensure that no unauthorized person is allowed to meet him during his stay and also when he is required in the Court for deposition.

The bench on Monday clarified that it shall not permit multiple counsel to intervene and argue and that only concerns of security, transfer of trial and witness protection shall be dealt with, scheduling the matter for further hearing on April 27.

As an interim measure, it is directed that the respondent-State shall keep the security, as provided to the family members of the victim, in continuity; provide security to Ms.Deepika Singh Rajawat and her family members; and that protection shall be provided to Mr.Talib Hussain, who is assisting the victim's family in prosecution of the grievance by remaining present in the Court or engaging counsel to assist the public prosecutor. Ms.Deepika Singh Rajawat shall provide the details of Mr.Talib Hussain to Mr.M.Shoeb Alam, learned Sanding Counsel for the State of Jammu & Kashmir to that he can do the needful in the matter.

At this juncture, a submission has been advanced by Ms.Indira Jaising, learned senior counsel appearing for the petitioner that the State authority should provide security in plain clothes. Mr.Shoeb Alam, learned standing counsel for the State of Jammu and Kashmir accepted the same and, therefore, we direct that the security shall be provided in plain clothes.