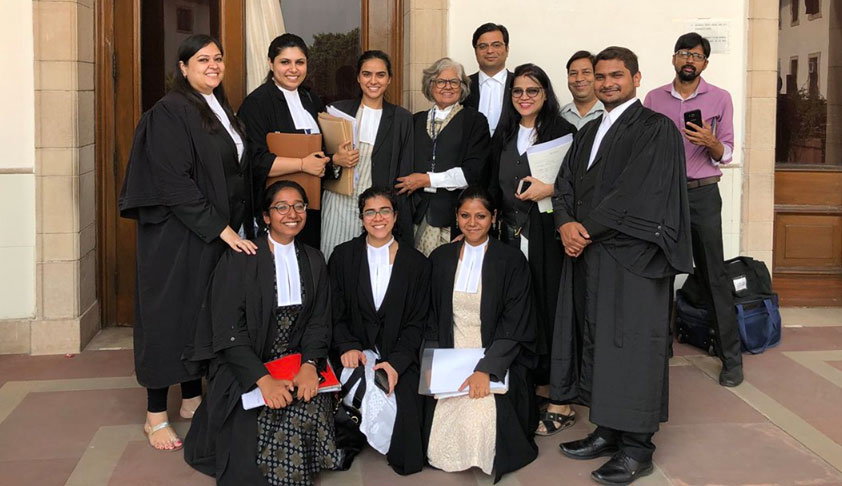 The Kathua case trial is transferred to Pathankot District And Sessions Court, PunjabA Three Judge Bench of Chief Justice Dipak Misra, Justice D. Y. Chandrachud and Justice Indu Malhotra on Monday transferred the trial in the gang rape and murder of the eight year old girl in Kathua, Jammu & Kashmir to the District And Sessions Court, Pathankot in the state of Punjab, the trial to...

The Kathua case trial is transferred to Pathankot District And Sessions Court, Punjab

A Three Judge Bench of Chief Justice Dipak Misra, Justice D. Y. Chandrachud and Justice Indu Malhotra on Monday transferred the trial in the gang rape and murder of the eight year old girl in Kathua, Jammu & Kashmir to the District And Sessions Court, Pathankot in the state of Punjab, the trial to be conducted in-camera and on a day-to-day basis.

The bench directed the state of Jammu and Kashmir to ensure adequate arrangements in respect of commutation and residential accommodation as desired by the District and Sessions Judge, Pathankot for the deposition of witnesses.

Further, the accused persons are also to be similarly treated so as to not give the impression of the presumption of guilt.

Finally, in view of the further investigation as well as the trial being monitored by itself, the bench restrained any other court from entertaining any such petition.

On a request in this behalf by Senior Counsel Gopal Subramanium, appearing for the state of Jammu and Kashmir, the bench permitted the state to appoint the Special Public Prosecutor in respect of the trial.

The matter is relating to the abduction, rape and murder of an eight year old girl. An F.I.R. was lodged at Hiranagar Police Station, Kathua, which was registered as F.I.R. No.10 of 2018. The iCrime Branch, which took over the investigation on 22nd January, 2018 from the local police has already filed the charge-sheet on 9th April, 2018, in the court of Chief Judicial Magistrate, Kathua in the State of Jammu & Kashmir.

The issues that emerge for consideration are whether the charge-sheet filed by the Crime Branch should be treated to have been dented to have an investigation by the Central Bureau of Investigation, to transfer the case outside the District of Kathua or outside the State of Jammu & Kashmir, the duty of the State to provide protection to the accused persons, one of whom is a juvenile and the witnesses, if the case is transferred to another place, what kind of protection is to be given to the witnesses and further what kind of arrangements can be made so that the witnesses not only feel protected, but depose absolutely in a fearless manner and that in the case of transfer to some other State, who should be allowed to prosecute the trial and how the trial Judge can be rendered assistance.

Citing the factors warranting the transfer of the trial from Kathua, Senior Counsel Indira Jaising, appearing on behalf of the petitioner, had advanced, “the accused are residents of Kathua and so they enjoy a special status in the region. There is an apprehension of witnesses being influenced...the newly appointed Deputy Chief Minister of the state has regarded this a ‘minor matter’...a local MLA set up the Hindu Ekta Manch for the release of one of the accused...the Kathua and J & K Bar Associations had called a strike...the local lawyers attempted to restrain the Crime Branch from filing the chargesheet so as to secure the entitlement of the accused to default bail...only yesterday, FIRs have been filed at Kathua against some lawyers...the entire matter has been sought to be accorded a communal colour...”

Indicating the affidavit filed before the apex court by the state of J & K, she had submitted, “the Press Release by the Kathua Bar Association annexed to the affidavit affirms that the bar had gone on strike to oppose investigation by the Crime Branch...the report of the District Judge, Kathua, called for by the J & K High Court, asserts that on the day the chargesheet was sought to be filed, there were ‘massive, intense protests by 40-45 lawyers who raised slogans against the Crime Branch’...”

“Your Lordships have agreed that witness protection, no interference with the court proceedings and victim compensation, which we are not praying for at present, are the three aspects of a fair trial...”, she had continued.

Opposing the transfer of the trial outside of the state at the outset, Mr. Subramanium had submitted, “the state stands for a fair investigation and trial...initially, there was some obstruction, but the report of the BCI inquiry committee and the affidavits of the Bar Associations guarantee that there shall not be any further interference...there has been a sound investigation by the Crime Branch and in record time...the further investigation under section 173(8), Cr. P. C. shall be concluded speedily...if it is apprehended that the deposition of the witnesses in the presence of hundreds of lawyers may jeopardise the administration of justice, then an in camera trial may be carried out...if a regular public trial is sought to be conducted, then it may carried out any other appropriate place within the state...the state has taken upon itself to ensure the security of the victim’s family members and their counsel...we make it clear that the same protection shall be accorded to all counsel to rule out claims of discrimination...”

“The districts of Jammu, Samba and Udhampur have close proximity to Kathua and hence, would not be amenable for a fair trial...but in deference to the suggestion by the state and on the assurance of a fair trial, we agree to a trial in the Ramban district...”, she continued.

“Yes, Ramban is a quieter, more peaceful place...it is on the national highway and would be easier for us...we shall make appropriate arrangements for travelling, security and residential accommodation of both parties and witnesses...the counsel will have the freedom to pick which side they wish to represent...”, agreed Mr. Subramanium. “The concern is not about the counsel but the witnesses who may turn hostile...”, added Ms. Jaising.

Senior Counsel Meenakshi Arora, representing two of the accused, objected, “Ramban is 220 km away from Kathua...the demographic set up of the district is such that it would be discriminatory to the accused...why must the trial be transferred to the part of the state comprising of the other sect of the population? fairness must be guaranteed to both sides...the trial will take as long as it does, despite being fast-tracked...the accused will be accompanied by atleast one family member...these are poor people who cannot afford to have earning members of the family away...Jammu is the summer capital, a much bigger and secure town and only 80 km away...”

“We are completely opposed to Jammu...it is the epicentre of all agitation...the Bar Associations may have undertaken to not obstruct the judicial proceedings but who is to ensure the compliance?”, exclaimed Ms. Jaising.

The Bench observed that needless to say, a fair trial is a sacrosanct principle under Article 21 of the Constitution of India and a ‘fair trial’ means fair to the accused persons, as well as to the victims of the crime. In the instant case, direct victims are the family members of the deceased, although ultimately collective is the victim of such crime.

The fair trial commands that there has to be free atmosphere where the victims, the accused and the witnesses feel safe. They must not suffer from any kind of phobia while attending the court. Fear and fair trial are contradictory in terms and they cannot be allowed to co-exist.

Eventually, the trial was transferred to the district Pathankot, state of Punjab. “We are agreeable to Pathankot...it is only 40 km away and hence, does away with the claims of long distance...”, remarked Ms. Jaising.

Ms. Jaising had also prayed that the proceedings be held in camera- “if this were a case under the POCSO Act, the trial would have been in camera...the POCSO Act may not be applicable to the state of J & K, but the matter still involves the rape of an eight year old girl...please allow an in camera trial so that the details of who said what are not floated in the media...also, please direct the proceedings to be videotaped, the records being retained by the court only to ward off any claims of unfairness in the future...”

The Bench only conceded to the prayer for in camera trial, declining to allow the trial to be videotaped.

In issuing the directions on Monday, the bench sought to rely on the Supreme Court judgments in Maneka Gandhi v. Rani Jethmalani (1978) and Asha Ranjan v. State of Bihar (2017).

The bench observed, “...the crux of the matter is to proceed with the trial in such a manner that the Fundamental principles of fair trial are complied with...needless to say fair trial is a sacrosanct principle of Article 21, and must be understood as a trial which is fair to both the victim as well as the accused...fair trial commands a free atmosphere where the parties and the witnesses feel safe and not suffer from the fear of any criminal element...a speedy trial is an aspect of fair trial...the trial is said to be speedy when there are no unnecessary adjournments in accordance with section 309, Cr. P. C...”

(ii) The District & Sessions Judge, Kathua shall send all the materials relating to the charge-sheet and other documents in sealed covers through special messengers with the assistance of the police force to the transferee court;

(iii) The transferee court shall proceed under the Ranbir Penal Code as that applies to the State of Jammu & Kashmir;

(iv) The statements of the witnesses that have been recorded in Urdu language, as accepted by Mr. Gopal Subramanium, shall be translated to English so that the transferee court does not face any difficulty in conducting the trial;

(v) The State of Jammu & Kashmir shall provide requisite number of interpreters as directed by the learned District & Sessions Judge, Pathankot so that the deposition of the witnesses can be properly recorded and translated copies thereof can be provided to the accused persons;

vi) It shall be the duty of the State of Jammu & Kashmir to transport the witnesses to Pathankot and provide all other necessary facilities, including food, etc. so that the witnesses do not face any difficulty;

(viii) The learned District & Sessions Judge, Pathankot shall himself take up the trial and not assign it to any Additional Sessions Judge;

(ix) The learned District & Sessions Judge, Pathankot shall fast-track the trial and take it up on day-to-day basis so that there is no delay in trial;

(x) The examination-in-chief and the cross-examination of witnesses shall be in a continuous manner and for no reasons whatsoever the same shall be deferred;

(xi) The State of Jammu & Kashmir is granted liberty to appoint the Public Prosecutor for prosecution of the case;

(xii) The trial shall be held in camera so that the witnesses feel protected and the accused persons feel safe;

(xiii) As this Court is monitoring the matter, no court shall entertain any petition pertaining to this case; and

(xiv) The juvenile, who is facing the trial, shall be dealt with in accordance with law and he should be given all special care and protection as per the command of the law.

[In Pic ;Legal Team For The Petitioner, posted by Senior Advocate Indira Jaising in Twitter]