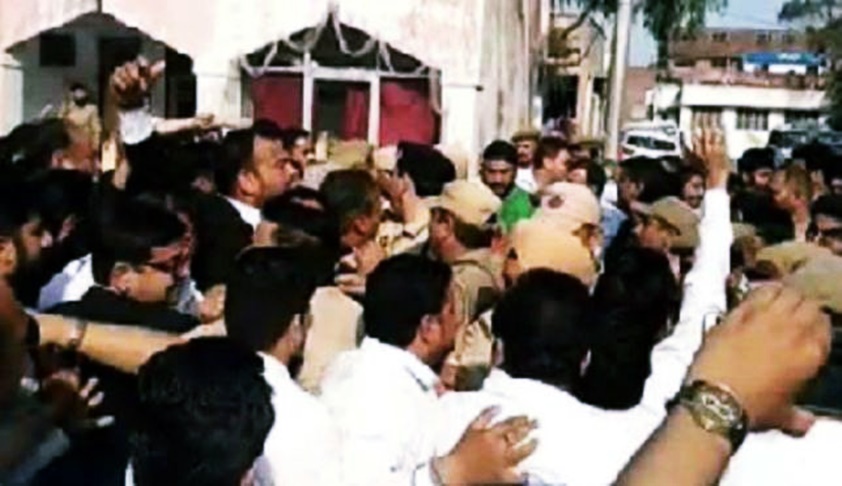 In the course of the hearing of the suo motu cognizance by the Supreme Court of the conduct of local lawyers in connection with the Kathua rape and murder, senior counsel Vikas Singh drew the attention of the report of the committee constituted by the BCI to inquire into the allegations, reading therefrom: “...Advocate Deepika Singh Rajawat, representing the victim’s family before the...

In the course of the hearing of the suo motu cognizance by the Supreme Court of the conduct of local lawyers in connection with the Kathua rape and murder, senior counsel Vikas Singh drew the attention of the report of the committee constituted by the BCI to inquire into the allegations, reading therefrom: “...Advocate Deepika Singh Rajawat, representing the victim’s family before the J&K High Court and the Kathua Magistrate, was not restricted from appearing at any point of time...the fact that she appeared in court is depicted in the orders of the High Court...the media has misreported the entire incident...the media did not report the press release issued by the High Court Bar Association (regarding resumption of work and peaceful protest for deportation of illegal immigrants)...the demand for a CBI inquiry by the J & K as well as Kathua bar associations is justified...”

He added that the report is signed by former Chief Justice of the High Court of Meghalaya Tarun Agrawal, who headed the BCI inquiry committee.

Advocate Shoeb Alam, Standing Counsel for the J&K Government that the BCI fact-finding report was not credible and that no officer of the crime branch was contacted by the committee. In the absence of recording the version of the officers who have actually been prevented from presenting the charge sheet, it is not understood as to how could a report conclude that the members of the bar Association did not obstruct work.

"In fact in the press release of the Kathua Bar Association issued on 9 April 2018 itself openly claimed that the submission of the charge-sheet was prevented successfully due to the agitations of the KBA", he added.

Chief Justice Dipak Misra intervened to break the argument, “Let the main concern regarding a fair investigation and trial not be missed...instead of getting into what the Bar Association says, we must deliberate on how to achieve justice...if we get into the allegations against and the contentions by the Bar, the victim may go out of the scene...”
Indicating the prayers in a related writ petition on behalf of the eight-year-old victim’s father, the Chief Justice remarked, “The first prayer is to transfer the trial from J&K to Chandigarh...”

“And the second prayer is for this court to monitor the trial...that shall ensure fairness,” advanced senior counsel Indira Jaising, representing the victim’s biological father.

“Monitoring will mean that we shall fast-track the trial...it will not mean that adequate opportunity of being heard is not granted...no facet of the Cr. P. C. will be ignored...when we speak of a fair trial, we mean that both the victim’s family as well as the accused may feel a sense of fairness,” the Chief Justice stipulated the grounds that the bench, also comprising Justices DY Chandrachud and AM Khanwilkar, shall address.

“These four are the core issues...the other (allegations regarding inter alia the obstruction in the filing of chargesheet by the local lawyers) are territorial issues...on April 4, when Ms. Rajawat said she was threatened, the relevant matter was not even listed...,” Singh sought to submit. “She (Ms. Rajawat) has filed her affidavit before the Supreme Court!,” objected Jaising.

She also raised concerns regarding the calls for “the social boycott of the entire (Bakkadwal) community” and “to not bring filth to the court”.  “In such an atmosphere, a fair trial may not be possible...as we asserted at the previous hearing, we are absolutely satisfied with the investigation...Now, we want the trial...then Your Lordships may decide on the plea for the transfer of the trial...,” she continued.

Advocate PV Dinesh, having sought the suo motu cognizance of the apex court on April 13, advanced, “The only concern is regarding the interference with the administration of justice...we do not know how many media persons were interviewed by the BCI inquiry committee...there is only a blanket statement that the media has misquoted the entire incident...”. He also submitted that the BCI committee has exceeded the scope of inquiry entrusted thereto.
The Chief Justice on Thursday noted, “The accused can say anything...they may say that they were not at the scene, but elsewhere...we shall deal with these issues separately on another day...”, adding, “once the chargesheet has been filed, the court must think several times before transferring the investigation”.

When the bench scheduled the suo motu cognizance for further hearing on July 23, an advocate pressed the issues of the obstruction in filing the charge-sheet and the conduct of the lawyers. Thereupon, the Chief Justice asserted vehemently, “The BCI report is not binding on us...we are taking cognizance, but we shall only fast-track the other case (seeking transfer and court monitoring of trial and protection to the advocates representing the victim’s family therein)...if the lawyers are at fault, they will be dealt with in accordance with the law...but we shall not hear this matter in May...this anxiety should be shown in the other case...our constitutional concern is for fairness of trial and procedure and requisite legal assistance to both sides...”

When Jaising requested that the records pertaining to the court’s suo motu cognizance be permitted to remain with the bench on Friday when the writ petition for the transfer of the trial is listed for hearing in view of the fact “that it has come on record that the filing of the chargesheet was obstructed”, the Chief Justice affirmed, “That would not be necessary...the chargesheet has been filed...if we find there to be the slightest threat to the conduct of a fair trial, we shall direct the transfer...primarily, we want to know what the father (of the victim of the gangrape and murder) wants...”