Katjuleaks Continues: Justice Kannan was transferred to P&H High Court since he is a Brahmin succumbing to DMK pressure; Kapadia didn’t take action against a Judge who has three agents 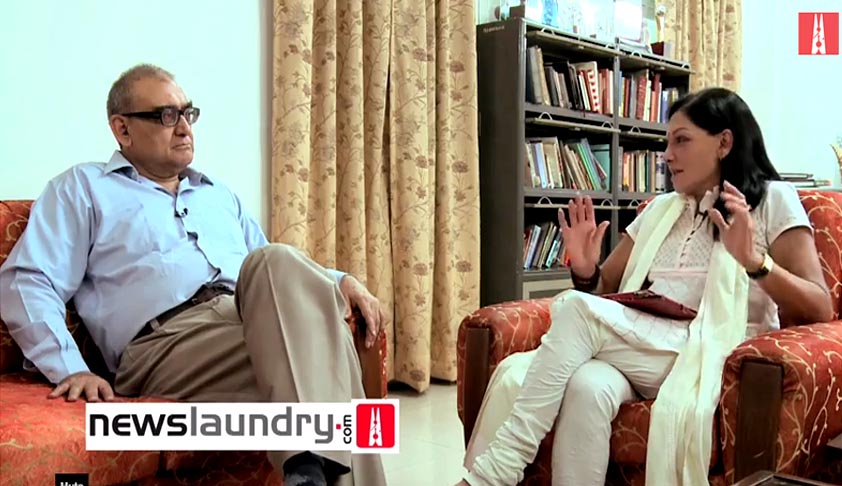 Justice Katju’s polemic against the corruption existing in the Judiciary and the undesired political pressure continues. In an interview to Newslaundry, he reveals another instance of political pressure on the Judiciary and the corruption plaguing the system.He now discloses the reaction of the collegium member Justice Ruma Pal after Justice Ashok Kumar was given an extension despite of...

He now discloses the reaction of the collegium member Justice Ruma Pal after Justice Ashok Kumar was given an extension despite of the collegium’s letter to the Government in view of the IB report and letter from the Chief Justice of Madras High Court, Justice Katju.

He states, “Then Ruma pal went to the Chief Justice of India and said what is this I am hearing about Justice Ashok Kumar. Then justice Lahoti (the CJI) said ooh look sister there would have been a crisis if that judge was removed, this is my information subject to corrections.  Because twice this three judge collegium has written to Government of India that this judge should not be allowed to continue. If this decision of the two judge collegium had to be changed it should be changed by the same three judge collegium instead of Justice Lahoti (CJI) superseding the collegium. But Lahoti alone without consulting two other judge of collegium (Justice Sabarwal and Justice Ruma Pal) wrote a letter to Government of India to give him 1 year more as Additional Judge. This is again something very improper how come a single judge alone can bypass a three judge committee .But he did.”

When asked about other such instances, Justice Katju was ready with another such confrontation relating to present Punjab and Haryana High Court Judge Kannan. He was earlier a lawyer in Madras High Court and was recommended for Judgeship by Justice A.P. Shah.

He reveals, “Now Kannan is a Brahmin  and Kannan is not a typically Brahmin name in Tamil Nadu and again this is my information mind you, subject to confirmation, that Kannan’s name was cleared by the  Government and at that time Government of India had that political party (DMK) as ally and Kannan’s name came to Supreme Court and three Judge collegium of the Supreme Court approved of  his appointment  and that time this political party woke up and said Ohh he is a Brahmin and they started making big fuss..”

He explained that despite the opposition, the Government had to accept the recommendation in light of the procedure laid down in the Judge’s case. He adds, “Evidently the Chief Justice of India must have discussed with law minister. this is my guess and why media was so worked out that collegium has approved his name he will be appointed but he will be sent to another High Court so he was sent to Punjab High Court where he is still a judge . He has got a very good reputation; you can ask anybody about Justice Kannan.”

He then explained that the point is that when a Tamilian lawyer is appointed Judge of Madras High Court why have signalled him out and sent him to Punjab high court? Is it not another instance of succumbing to political pressure because again UPA Government was in power? This Tamil Nadu party (DMK) who was in alliance with Congress put pressure on Chief Justice of India and he again succumbed to pressure and said all right we would appoint him but we would send him to Punjab High Court. Again an improper compromise.

Read another revelation about Justice Balakrishnan being adamant on Elevating P.D. Dinakaran and Justice Kapadia being informed by Justice Katju.

He then went on to give another instance of corruption in the Judiciary where he spoke about a Calcutta High Court Judge who was transferred to Allahabad High Court where he became the senior most Judge. However, there were many complaints against him being made the Chief Justice.

He states, “Chief justice of India Justice Kapadia called me and said there is pressure on him to make that judge Chief Justice but he is receiving complaints regarding him. Can you just enquire about him and let me know? I said yes I am going to Allahabad and I’ll come back in two days and will let you know.  I came back to Delhi and I gave a chit to Justice Kapadia, the chief justice of India containing three mobile numbers of persons who are the intermediaries and I said you get these mobile numbers tapped by your intelligence and after a month Justice Kapadia spoke to me and said that what you spoke to me was correct. One person was from Calcutta and one person was from Allahabad and he had an office outside which there was a board on which it was written Legal Options and he was also an agent.”

According to him, after having such cogent proof of corruption, Justice Kapadia should’ve asked for the Judge’s resignation or initiated an impeachment motion against him in the Parliament because that is what he would’ve done if he was in his position. However, nothing of this sort happened. The Judge was never made the Chief Justice or brought to the Supreme Court.

He also indicated towards involvement of other people working hand in hand with corrupt Judges, some intermediary like a lawyer who is your man of confidence. Hence, transferring of Judges is preferred in such situations.

He explains, “See if you take money directly in your hands then your finger prints will be on them and phenolphthalein powder maybe put and you may be caught red handed. So normally these corrupt chaps have intermediaries some close relative or some lawyer who is close to them and through them they take money. So if you go to other place (Get transferred). It will take some time to build up man of your confidence. You see if you are a lawyer for 20 years at a high court then you know the functioning and working and you have your confidants there. But if you go to another high court you go as a stranger. It is not that easy and it will take a long time to build up those safe contacts.”

Read why Justice G.P. Singh -one of the finest Judges in India was not elevated to SC, as revealed by Justice Katju

Justice Katju also responded to questions raised over the timing of the revelations. He stated, “People don’t understand that there is certain constrain on a judge. He can’t go into the public domain, he can’t go to the press, can’t get involved in controversy’s. So for 6 and half years I kept silent till my retirement .In 6 and a half years I have also forgotten about this case because so many things are going on in my life…. How I was reminded about it was that on my Facebook page couples of weeks earlier some Tamilians asked me to post my experience as Chief Justice of madras High Court. Then I started writing some of my experiences and then this occurred to me then I posted it on Facebook, it’s as simple as that.