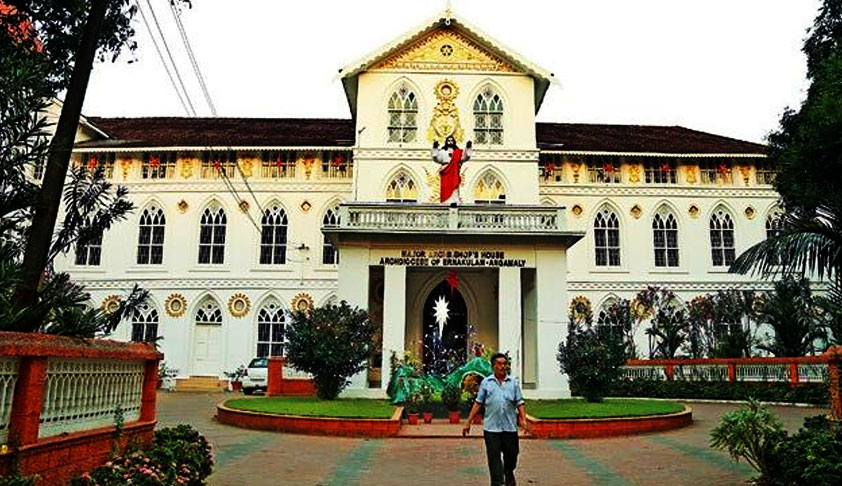 A Division Bench of Kerala High Court has set aside a single bench judgment that ordered the police to investigate into allegations against the Major Arch Bishop and others of the Syro-Malabar Church in connection with the Syro-Malabar Church land deal.The Bench has held that an intra-court appeal is maintainable under Section 5 of the Kerala High Court Act against a Judgment passed by a...

The Bench has held that an intra-court appeal is maintainable under Section 5 of the Kerala High Court Act against a Judgment passed by a single Judge under Article 226 exercising the original criminal jurisdiction.

Justice B Kemal Pasha had allowed a writ petition filed by one Shine Varghese, a member of Arch Diocese, in which he sought probe into allegations that Cardinal Mar George Alancherry conspired with others with an intention to misappropriate the major sale proceeds in connections with lands belonging to church.

It Is The Court, Not The Pope To Decide On Civil And Criminal Matters Relating Diocese Properties In India :Kerala HC [Read Judgment]

The Major Arch Bishop preferred a writ appeal against the single judge order and it was heard by a bench comprising Chief Justice Antony Dominic and Justice Dama Seshadri Naidu. Following are the main issues dealt with by the bench during the hearing.

To answer this issue, the bench referred to a recent division bench judgment in State of Kerala v Mohammed that had held that the restrictions contained in Clause 15 of the Letters Patent were deliberately not incorporated in Section 5 of the Kerala High Court Act; therefore, “there is no exclusion of the orders passed by a learned Single Judge in exercise of a criminal jurisdiction”.

"Recently, a Division Bench, to which one of us (Antony Dominic, C.J.) being a party, elaborately considered the issue in State of Kerala v Mohammed. It has examined Clause 10 of the Letters Patent vis-à-vis Kerala High Court Act, and has held that the Division Bench has examined Ram Kishan Fouji in which the Supreme Court considered clause-10 of the Letters Patent as applicable to the erstwhile Punjab & Lahore High Courts.

The bench examined the Lalita Kumari case and concluded that it does not obliterate the alternative statutory remedies available to the aggrieved complainant. The court observed that there are alternative remedies when police refuse to register a crime. It said there are provisions in the Code of Criminal Procedure which empower the courts of the first instance to exercise a certain degree of control over ongoing investigations.

“Lalita Kumari concerns the statutory compulsion on the police to register an FIR if they are presented with a written complaint making out a cognizable offence. It does not, at any rate, mandate that the aggrieved complainant could rush to High Court on the police’s refusing to register a crime. Much less has it enabled the suitors to ignore the other statutory safeguards available to them and insist on a public-law remedy—especially a remedy under Art.226, at that,” the court said.

The court also noted that Shine had approached the police on 15th January and preferred writ petition on 16th January. On this aspect, it said: “Here, Shine seemed to have rushed to the Court posthaste, before the ink dried on the paper, as if it were. So, we find it hard to believe that there was proper demand and refusal, the essential elements for a mandamus. “

Setting aside the single bench judgment on Shine’s petition, the bench observed: “The impugned judgment seems to have placed heavy reliance on the Diocese’s enquiry report and concluded—prima facie, though— that a cognizable offence is made out. But, regrettably, it has missed out on the fundamental jurisdictional issue. It has failed to notice the unseemly haste Shine showed: no sooner had he submitted his complaint than he rushed to the Court—in 24 hours.. To conclude, we may observe that Shine Varghese has faltered at the first hurdle—the alternative remedy, which he has on more than one count. That is, the impugned judgment suffers from legal infirmity and deserves to be set aside. And we do so.”

Other complainants have approached magistrate court

The bench also took note of the fact that before Shine could complain, others had taken up the issue and on one such complaint, a criminal court took cognizance of the matter, and in another, a competent Magistrate found the dispute “of civil nature”. That finding has attained finality.  “That finding has attained finality. So, in the face of that finding involving the same issue and the same respondents or accused, can another person answer the same description as the other person did—a parishioner—once again complain,” the bench asked.