KK Venugopal : A Great Human Being And A Jurist Par Excellence 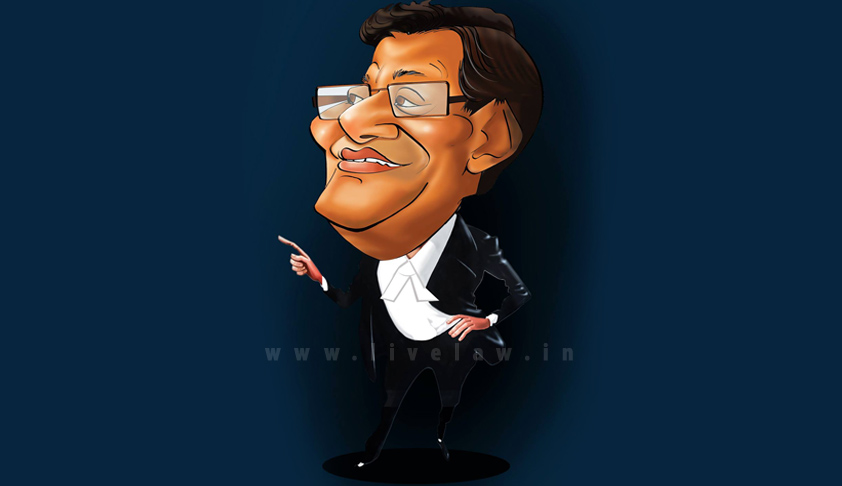 Today the President of India has cleared the name of  Shri K. K. Venugopal as the new Attorney-General for India. Mr. Venugopal is practicing as Senior Advocate in the Supreme Court of India for a long time (about five decades) and is an internationally known jurist who has appeared in many landmark cases in the Supreme Court as well as the different High Courts in the country. He holds...

Today the President of India has cleared the name of  Shri K. K. Venugopal as the new Attorney-General for India. Mr. Venugopal is practicing as Senior Advocate in the Supreme Court of India for a long time (about five decades) and is an internationally known jurist who has appeared in many landmark cases in the Supreme Court as well as the different High Courts in the country. He holds the legacy of his great father Mr. M. K. Nambiar who had played a great role in the A. K. Gopalan case and Golak Nath case. As I know Shri Venugopal personally for a few years, I have observed his great legal statesmanship closely and found him a great human being and a jurist par excellence. I think he is the best choice for the office of the A.G. I would like to present a few facts about his legal career and his great contribution to the legal profession in the country.

Mr. Kottayan Katankot Venugopal, popularly known as K. K. Venugopal was born in 1931 in Kerala state in Nair family. His father Shri M. K. Nambyar was a famous lawyer who used to practice in district courts at Mangalore in Karnataka. K. K. Venugopal was brought up at Mangalore, Karnataka. Later his father shifted his practice to the High Court of Madras. As stated earlier, his father had argued in the famous A. K. Gopalan case and also some other important cases in the High Court of Madras and the Supreme Court of India. His father Mr. M. K. Nambyar had earned his LL.M. from London. K. K. V. did his legal studies from R. L. Law College, Belgaum and started his practice in High Court of Madras in 1954 in the chamber of his father who was a hard task master. K. K. V. had a traditional arranged marriage. He has one daughter and two sons. One of his sons, namely, Krishnan Venugopal is also practicing as a senior lawyer in the Supreme Court of India.

Mr. K. K. Venugopal started his appearance in the Supreme Court of India in 1963. In 1972 he was designated as a Senior Advocate in the Supreme Court. He was appointed as Additional Solicitor-General for India in 1977 during the Janata Party government. In 2015 he was awarded Padma Vibhushan by the President of India for his outstanding service to the nation. Mr. Venugopal has appeared in many landmark cases such as Mandal case, Ayodhya case, Judges’ appointment cases, Jayalalitha case, etc. His unique argument style and great knowledge of constitutional law is admired across the globe. He has also been a counsel of the CBI in some famous cases. Recently he had appeared for Mr. L. K. Advani in the Ayodhya case. The Supreme Court has also admired him for his outstanding argument-making style and deep knowledge of law. He has also acted as amicus curiae in some important cases like 2 G spectrum.

The Rule of Law and Human Rights in India

In 2010, I had invited Mr. K. K. Venugopal to deliver the Justice H. R. Khanna Memorial Lecture at the Indian Institute of Public Administration where I working was a faculty of law. He had delivered the lecture on Rule of Law and Human Rights in India, which is published in our book titled Justice H. R. Khanna: Law, Life and Works from the Universal Law Publishing Company. The lecture was highly appreciated by the audience. In his lecture, he had praised Justice Khanna for his courageous dissenting judgment in the ADM, Jabalpur case. Thereafter, I have met him many times. I am deeply impressed with his scholarly personality and behaviour. He is a great lawyer and a good human being who loves humanity. He likes scholars and scholarly works and discussions. He is a true professional who has always maintained a high degree of professional ethics and integrity. He is a man of discipline. He has trained many lawyers and some of his disciples are practicing as senior lawyers in the Supreme Court while some of them are also gracing the benches in different High Courts. Some of his disciples are also working as renowned lawmakers and administrators in our country.

Mr. K. K. Venugopal loves ideas, discussions, reading, and writings. He hears others with a great patience and respect. Professional eminence has not touched his mind. He considers others’ arguments and pleas. He has a scientific temperament. He has also a religious attitude based on equal respect for all religions which is the fundamental spirit of our Constitution. He is indeed a great ambassador of religious harmony and secular movement. He is a highly influential and creative man of ideas who helps others to find truth. Whenever he writes or speaks, people take him seriously. He is a great defender of human rights, independence of judiciary and human dignity. He writes on important issues in The Hindu and other prominent newspapers. He has supported many educational programmes in different law schools and universities of the country such as National Law School, Bangalore, NUJS, Kolkata and so on. Both the Bench as well as the Bar respect him and love him. He is the best choice for the great office of Attorney-General for India.

The office of the Attorney-General for India has an important role in the constitutional democracy of the country. The AG is the highest law officer of the country. In fact, he is also the leader of the bar. He is not a political functionary like his British counterpart. He is a professional person who assists the Court to find the truth and deliver justice as per the constitutional spirit and values. Many eminent persons such as M. C. Setalvad, C. K. Daphtary, Soli Sorabjee and others have held this office and contributed a lot. A senior lawyer and jurist par excellence Mr. Venugopal would definitely enhance the prestige of the office. At a time when the Central Government is facing challenging situation in the Court, I hope Mr. Venugopal would be a game-changer for the government. The Supreme Court is likely to decide some important cases like Aadhar case, where he can certainly play a great role in presenting the actual constitutional position before the apex court of the country. He is highly experienced lawyer whose assistance would also benefit the court deeply. He is not committed to the philosophy of a particularly government but to the Constitution and democracy. He is guardian of the Bar and a defender of Rule of Law and constitutional democracy. The Supreme Court of India is the most powerful court of the world which has delivered many outstanding judgments. Its judgments are cited in many reputed top courts. It needs a great brain that could assist it brilliantly in imparting justice. Mr. Venugopal would indeed be a great source of support and assistance for the court to fulfil the wishes of our great founding fathers who gave us the Constitution and institutions. We, the People of India should celebrate this moment.

Dr. Lokendra Malik  is practicing as an Advocate in the Supreme Court of India with former Union Law Minister Salman Khurshid. He did his Ph.D. in Indian Constitutional Law from Kurukshetra University, Kurukshetra and also earned the LL.D. (Post-doctoral) degree from the National Law School of India University, Bangalore in the area of Indian Constitutional Law on Constitutional Position of the President of India. Before joining law practice, Dr. Malik has also been a professor of law at the Indian Institute of Public Administration, New Delhi and taught senior civil servants. Public law is his main area of interest in terms of litigation, academic writings and research. He has been a member of Internship Committee of the Lok Sabha and is also a member of some other prominent academic bodies such as Indian Law Institute and Indian Institute of Public Administration.